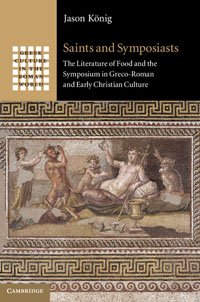 This ambitious book surveys writing about table-talk and eating in the Roman Empire, from Plutarch to saints' lives. Part I covers the sympotic dialogue tradition; much of this has appeared elsewhere. Part II tackles transgressive consumption as the reverse of, and danger hidden within, elite conviviality. Bakhtinian theories of dialogism and the grotesque pervade the book. A guiding premise is that the sympotic tradition exerts an influence even when subverted or ignored. Another is that Christian authors belong to the Greco-Roman tradition even as they rewrite it.

Sympotic texts create fantasy communities uniting characters, past authors, and present readers, linked by shared table practices, knowledge, and modes of argument. Those elements evolved with time and Christianization; sympotic debate - playful, speculative, competitive - became especially suspect. Yet late antique convivial (or anti-convivial) writing continues to conjure community. A second theme is the risk of contamination in the civilized symposium, threatening readers as well as characters. Classical texts flirt with the danger of disruption, but usually contain it. By contrast, Christians may welcome contamination as demonstrating Christianity's superiority or paradoxical, transgressive power.

After an overview of the Greek symposium and its literature (Ch. 1), Ch. 2 asks what appeal Plutarch's Sympotic Questions and Athenaeus' Deipnosophists held for ancient readers, joining a move to rehabilitate imperial miscellanism. Plutarch promises spiritual nourishment; Athenaeus, a rich "feast of words." Both show compilatory knowledge in action and bring to life voices of the past; both delicately balance dialogic openness and control.

Ch. 3 shows how Plutarch pulls readers into his "virtual community", cast as an elevated form of civic festival or sacrifice, and argues for the coherence of the Sympotic Questions. Diversity of setting, participants, subjects, and interpretation mark this community. "Alternative explanation" has a didactic function, allowing novices (Romans, young men, readers) to learn the ropes of sympotic talk, as modeled in book 3. "Faint thematic continuities", such as teasing in book 2, let readers learn through repetition and by spotting connections. Conversational quotation styles draw past authors into the community. Athenaeus (Ch. 4) goes farther, blurring the boundaries among levels of quotation.

Ch. 5 introduces the theme of early Christian use of commensality to articulate continuity with and distance from majority cultures. Luke's gospel and Clement of Alexandria share a suspicion of sympotic debate and preference for authoritative instruction. In the Educator, Clement treats sympotic topics while eschewing dialogue. Aided by Logos theory, which holds that the Logos inspires all humanity, he welds quotations from classical authors and scripture into cohesion. The balance between chaos and control tips in favor of control.

Methodius' revisionist Symposium (Ch. 6) blends classical and Christian elements in "mutually enriching and defamiliarising" ways (158). His novel community is homogeneous, female, ascetic, and other-worldly. Sympotic topics and quotation styles are again Christianized, so that scriptural authority prevails and polyphony dissolves in the Logos. In place of playful debate, his virgins argue either too harshly or not at all. What others have seen as a failure, König regards as an effort "to reconcile new attitudes to authority and consensus with older modes of narrative and debate" (175).

Why does sympotic dialogue decline in late antiquity? Ch. 7 cites new attitudes toward religious difference, asceticism, and a push for consensus over debate, typified by Augustine. König finds discomfort with sympotic debate even in his early dialogues, which seems pointedly to avoid convivial settings. Libanius, John Chrysostom, and Julian the Apostate illustrate the other trends. Despite Antioch's lively festival and dining culture, all three disregard the symposium. For Libanius, letters are the locus of virtual community, oratory the premier form of elite speech. Ascetic, intolerant Chrysostom opposes pagan feasting and ignores sympotic dialogue. Julian too disregards sacrificial commensality, while his anti-sympotic Symposium scorns its own fantasy community. The symposium is present here chiefly by its absence, an interpretive challenge.

Part I ends with Macrobius' Saturnalia, a markedly Roman and late antique symposium. Roman speakers, texts, and examples take center stage, and Macrobius shies away from agonistic speculation in favor of harmony, reworking Plutarchan material while eliding its combativeness.

Part II turns to deviant feasting and the potential of eating and drinking, as bodily practices, to expose elite pretensions. Two flagrantly abnormal eaters, the philosopher and the parasite, occupy Ch. 9. The philosopher's eating can define or debunk him, as in Lucian's Symposium. In Alciphron's Letters, parasites offer degraded mirrors of elite self-presentation. Their appetites separate them from high-status characters, cause humiliation, and thwart their bids for dignity. Yet parasites also show how high aspirations, even the reader's, can be deflated. Their elusive desires may parallel readers' unrealizable yearning for the classical past, while their self-conscious attempts to play other roles echo sophistic ethopoieia.

Ch. 10 explores transgressive eating in Greek and Latin novels, which use this motif to underscore the fragility of status, self-control, and even bodily integrity. Frustrated and debased consumption pervades Apuleius' Metamorphoses, where Lucius, like a parasite, undergoes painful hunger, humiliation, and physical abuse. König also sees grotesque eating as part of Lucius' immersion in gross corporeality and disorientation on the road to "conversion."

In the Apocryphal Acts (Ch. 11), fasting, eccentric dining, and celebration of martyred bodies signal resistance to pagan society. Strikingly, the Acts of Andrew and Matthias recounts the conversion of a cannibal city, reversing the charge of cannibalism leveled at Christians. The text embraces cannibalistic "contamination": Andrew's tortured body sprouts a fruit tree; a flood "devours" and "drinks" the villains; resurrected and converted, they spiritually feed on Andrew. For König, these purposely grotesque images advertise "the transgressive, shocking quality of the new Christian faith" (322).

Finally, late antique hagiography decisively shuns elite conviviality. Athanasius, Theodoret, Jerome, and the History of the Monks of Egypt depict ever more extreme ascetic practices. Yet even here, "long-standing classical stereotypes of convivial luxury, and even sympotic conversation" provide reference points (350). Classic tropes of transgressive eating usually form points of contrast, but at times they convey the fragility of ascetic virtue or the paradoxical holiness of Christian heroes. Commensal deviance again defines Christianity against outside culture.

Presented as a series of case studies organized by author or genre rather than theme, this book can feel like the sympotic miscellanies it champions: pleasurably diverse and enlightening, but at times repetitive and disjointed. Its greatest pleasures come from König's insightful analyses. Yet its real contribution may lie less in its specific arguments than its capacious vision of the sympotic tradition and marriage of pagan and Christian texts.