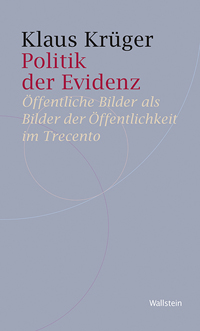 Klaus Krüger's new book is an important attempt to broaden the contextual understanding of late-medieval Italian secular imagery. The traditional division of iconography to "religious" and "profane" subject matter already noted the importance of secular themes in the Middle Ages. However, these were almost exclusively discussed in connection to the classical texts they illustrated; or in the case of complex allegorical cycles on politics, such as the fresco decoration of the Sala dei Nove in Siena by Ambrogio Lorenzetti (1388-1339), scholars dedicated their energies to identifying the political treatises that might have inspired the images. The text-oriented approach to iconography was gradually replaced in the 1990s by a more contextual understanding of the works, which focused on their applications, functions and reception.

This paradigmatic shift emerged prominently with regard to religious images. Hans Belting's ground-breaking book (Bild und Kult, 1990) not only separated the era of art from the era of images in theoretical terms, but successfully showed that the beholder's relation to cult images was characterized by an active, ritualized attitude, significantly different from pure contemplation and aesthetic enjoyment. [1] This insight has proven to be particularly fruitful for the mapping of the liturgical and devotional uses of representations and the individual or collective responses they elicited. Krüger's previous works on the cult of St. Francis (Der frühe Bildkult des Franziskus in Italien, 1992) and on the complex visual mechanisms of devotional imagery (Das Bild als Schleier des Unsichbaren, 2001) remain major contributions to this trend. [2] The emphasis on religious imagery was understandable in light of the sheer number of works, but it also meant the relative marginalization of secular representations. [3] Although the contextual turn led to critical reconsideration of mythological and classical representations in their domestic milieu, the collective uses and public mechanisms of political iconography received less attention. Whereas today the era of the "religious image" is a shared master narrative beyond specialist circles, the parallel story of collective political imagery remains fragmented at best.

Krüger's Politik der Evidenz targets this gap in the scholarship. Except for the brief discussion of the Sala dei Nove in Siena the key case studies in the book are all focused on 14th century Florence: the Palazzo della Signoria, Palazzo del Arte dei Medici e Speziali, Palazzo dei Giudici e Notai, Domenico Lenzi's Specchio Umano, the Expulsion of the Duke of Athens (Palazzo Vecchio) and the Misericordia Domini (Bigallo). The discussion of these monuments is framed by and interconnected with a number of reflections on the aspects of visual "evidence/reality" (Evidenz) and "public/open sphere" (Öffentlichkeit).

The term Evidenz, which Krüger uses to describe the reality of images, has a double meaning. It refers to the verisimilitude of the representation, which is in fact its capacity to depict the (super)natural world in a detailed and realistic manner. Around 1300 in Italy visual expression underwent a profound transformation, the mimetic capacity of images was significantly increased. The author notes that the expanding potential for realistic representation contributed considerably to their political role within the public realm, since they allowed the construction of a more nuanced message.

Furthermore, it is underscored that this descriptive role of images was only one aspect of their public application. Evidenz for Krüger also implies that the image is a reality in itself, that impacts the beholder (not dissimilar to the way the icon can function simultaneously as representation and real presence in devotional contexts). Public political imagery does not merely represent reality, but by depicting a particular constellation of things, it imposes this constellation on its viewers. The function of political representations is to generate a collective and intersubjective perception of the world within a confraternity, a guild or a city, and to establish the discursive community of its members. In this sense it is descriptive and prescriptive at the same time.

The normative use of images presupposes those shared spaces where this construction of individual / corporate / confessional / communal identity through representation can be enacted. Following Jürgen Habermas, Krüger convincingly suggests that the political function of imagery during the period cannot be separated from the creation of the "public/open sphere" (Öffentlichkeit) in the commune. The development of the square around the Palazzo della Signoria in Florence shows that the aim was to create an ordered "open" space surrounding the building, therefore symbolically enforcing the political order in Florence (9-16).

In turn, the public spaces in the city allowed the depiction of explicitly political images aimed at the entire population. The author discusses how in 1329 the commune Colle di Val d'Elsa sold corn to Pisa instead of Florence, and thus violated the agreement between the two cities. The subsequent defamatory fresco (pittura infamante) in Florence condemned this treachery and put the commune Colle di Val d'Elsa under significant public pressure as well. Although the original fresco is no longer extent, Krüger reconstructs visual aspects of the defamation process through the full-page miniature on the event in Domenico Lenzi's Specchio Umano (16-34).

The analysis of the Misericordia Domini (Bigallo) demonstrates the overlap between political and religious imageries. Krüger shows that the religious prescriptions of Mercy are depicted as constitutive elements of the city's actual physical reality and its "body politic" (34-53). Similar fusion of symbolic and realistic representation can be witnessed on the ceiling fresco in the Palazzo dei Giudici e Notai; where the four coat of arms belonging to the city of Florence, the commune of Florence, the people of Florence, and the Guelph party are encircled by the city-wall. The images affirm the political identity of the guild and visualize the city as a physical entity (53-64).

Krüger's case study on the Expulsion of the Duke of Athens (Palazzo Vecchio) examines the multi-layered image of a major political crisis in 14th century Florence: the rule of Walter of Brienne (1344-1345). He discusses in detail several elements of the fresco and their political implications: the figure of St. Anne, the Palazzo della Signoria, the empty throne, and the man-faced scorpion in the Duke's hand (64-90). The argument concludes with considerations about hierarchy and representation. The author contrasts the need for a public sphere and public consensus in the city-republics of Florence (and Siena) to the centralized tyrannical hierarchies of signorial regimes. It is suggested that the public sphere and the visual strategies of Evidenz were an attempt to reconfigure the broadly understood political life in these communities in the absence of a single ruler (90-106).

The great strength of the book is the clear presentation of a new theoretical model. It successfully combines the concepts of visual "evidence/reality" (Evidenz) and "public/open sphere" (Öffentlichkeit) and applies them to the complex world of late-medieval Italy. Krüger manages to bring together the art historical (emergence of the realistic style) and political (age of the city-republics) understandings of the period in a coherent manner. Moreover, this model opens up the possibility to consider this epoch through a terminology allowing a fruitful dialogue with current debates on political order and representation. Although the case studies are well selected and illustrated, it is clear that this book offers only an introduction even to the Florentine tendencies. [4] The true test of these ideas will require a comprehensive look at the entire Italian peninsula in all its variations - nevertheless, Klaus Krüger's argument constitutes an important initial contribution to these debates.