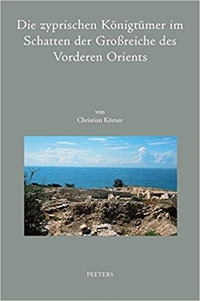 This substantial monograph emanates from a habilitation thesis submitted by the author at the University of Berne. It examines the history of the Cypriot kingdoms of the Archaic and Classical periods from the late eighth century BC, when the existence of these kingdoms is directly attested in inscriptions of the Neo-Assyrian monarch Sargon II, until the closing years of the fourth century BC, when they were abolished during the course of the struggles of Alexander's successors Antigonus and Ptolemy.

Studies of the history of the Cypriot kingdoms with a similar temporal scope were offered previously by George Hill and Einar Gjerstad in the 1940s and Panaghiotis Stylianou in the late 1980s. [1] Novel insights into these polities' internal history and external relations that accumulated from ongoing investigations of the written, archaeological, and numismatic record over the past three decades recommend the timeliness of new initiatives for treatment of the subject. The stated aim of the present monograph is to offer a critical review of the sum of the invariably highly lacunose textual evidence and to advance one's understanding of its implications through an analysis also informed by theoretical historical perspectives. This textual focus notwithstanding, to the author's credit there is a parallel close attention to the contributions made by archaeology to the discussion. The wide-ranging archaeological bibliography could also usefully include Anna Satraki's study, based primarily on archaeological evidence, of the political organization of Cyprus from the Late Bronze Age through the end of the Classical period. [2]

There are five main chapters. Setting the background to the ensuing discussion, Chapter 1 offers an overview of the island's geography and economic resources, the topography of individual kingdoms attested and evidence that bears on fluctuations in their number and geographical configuration with time. Broadly adapted to the geography of the island, political divisions would be especially affected, as also argued earlier by Maria Iacovou [3], by economic considerations, pivoting on access to raw materials, and especially copper, a port for export and agricultural land. Conflicts would not run along ethnic lines, but rather between different economic zones, such as pure copper producers (e.g. the inland kingdoms of Tamassos and Idalion) and pure port cities (Kition, Salamis) (56), with a gradual strengthening of port cities, due to an increasing importance of ore exports from the Assyrian period onward, and replacement or absorption of inland polities (Ledra, Tamassos, Idalion and Chytroi) by coastal ones.

Chapter 2, dealing with questions of Cypriot identity, examines whether the existence of literate groups that variously expressed themselves in different languages (Greek, Phoenician and so-called Eteocypriote) in syllabic and alphabetic scripts, and foundation myths of dynasties and cities, could imply any clearly defined, distinct ethnic identities and divisions of the island's population along ethnic lines. Although the meagre evidence would hardly warrant any definitive conclusions, the resulting picture, as the discussion illustrates, is multilayered and complex: Greeks and Phoenicians co-existed in Lapethos, Tamassos and Idalion; Amathus, featured in textual sources as autochthonous, had kings with Greek names; Phoenician inscriptions have also turned up in mainly Greek settlements. Common people could have effectively identified themselves with reference to their place (city, town) of origin (e.g. 88-98). The relevant testimony of foundation myths (copiously collected in Kyriakos Hadjiioannou's major corpus of Greek testimonia on the history of Cyprus [4]), possible to investigate with reference to Greek-speaking elites, would be the work of ruling dynasties with a view to legitimizing power through, among others, claims of great antiquity and ties with heroes of the Trojan War but also with the legendary indigenous personality of Kinyras. Hellenic pedigree would have coexisted with official manifestations of native tradition(s).

The following two chapters consider testimony about the relations of the Cypriot kingdoms with the powers of the Neo-Assyrians, Neo-Babylonians, Egyptians, and Achaemenid Persians who rose successively to prominence in the southeastern Mediterranean domain from the eighth through the fourth century BC, and reflect, in turn, on factors that may be presumed to have led to the abolishment of the Cypriot polities under Ptolemaic rule. There is care to place Cypriot circumstances within the larger scheme of international developments in the southeastern Mediterranean and, when possible, within the broader context of different imperial administrative and economic mechanisms and policies - themselves also pieced together from a host of disparate testimonies in different literary traditions. Cypriot strategies in dealing with neighboring major powers are put in highlight: attestations of Cypriot allegiance or submission to imperial neighbors would point above all to a perennial Cypriot concern for the preservation of traditional trade networks, with which Cypriot prosperity was inextricably linked, in particular, on the Levantine coast.

In Chapter 3 (171 ff.), the testimony of the Neo-Assyrian and earlier Near Eastern record is used in order to expand on the idea (earlier suggested by Andreas Mehl [5]) that the essentials of the relationship between the lesser rulers of Cyprus and their Eastern overlords ought to be understood with reference to the concept of suzerainty - or partnership of unequal kind that largely rested on personal bonds of loyalty of the individual Cypriot rulers to their Eastern sovereigns, and which entailed, in addition to fealty, basic obligations of the former rulers to provide military assistance and tribute. As Körner indicates through consideration of Assyrian practice in other analogous contemporary contexts, this type of relationship would have been contractual, and at least during the period of the Assyrian dominion over the island, would have been subject to reaffirmation upon the death of one of the contracting parties. There is no concrete evidence for Cypriot political dependency on the Neo-Babylonian kingdom. The concept of suzerainty would nonetheless provide, as the author indicates, useful insights into the circumstances of the Cypriot kingdoms' submission to Egypt during the first half of the sixth century, for which there is explicit, albeit extremely laconic, testimony, and whose conditions otherwise elude us. The same concept could indeed explain, as Körner argues, the unusual 'special autonomy' enjoyed by the Cypriots under the Achaemenid Persian regime from the second half of the sixth century down to the Battle of Issos (Chapter 4). In the latter instance, the proposed suzerainty concept would appear to be validated, as Körner further elaborates, by reported key instances of Persian hostilities against Cypriot cities. On the occasions of the Cypriot revolts of the 490s and the mid-fourth century and the outbreak of the long-drawn hostilities between Evagoras I of Salamis and Artaxerxes II in ca. 390 BC, Persian military interventions in Cypriot affairs - stated in our sources to have each been triggered by appeals of Cypriot parties for help against local Cypriot wrongdoings - would be in keeping, as Körner contends, with a superior monarch's moral obligation to assist his subordinates in times of need. One ought to still keep in mind that, even if the moral principles of suzerainty relationships could provide justification for Persian action against Cypriot 'wrongdoers', all these Persian interventions occurred on moments when the policies of the latter 'wrongdoers' placed serious obstacles in the way of Persia's efforts to maintain stability along its Egyptian/Levantine and Aegean frontiers. [6]

A center-periphery framework adopted by the author provides an attractive explanation for, among other things, the abolishment of the Cypriot kingdoms in the end of the fourth century. Insularity and/or Cyprus' geographical remove on the periphery of eastern empires would have undermined the ability of eastern powers to impose a direct control over the Cypriot kingdoms, and would have allowed for the perpetuation of the local political structures, represented by the authorities of the individual kingdoms of the island. Such a policy of tolerance would have seemed far less expedient, and have been abandoned, at the time of the conflict of Alexander's successors in the eastern Mediterranean, when divided loyalties of powerful Cypriot kingdoms - then centrally located within the struggle - could directly affect the balance of power.

Attention turns in Chapter 5 to Cypriot kingship - an institution whose particulars it is ever difficult to determine as definitively as one would have desired. A series of informative sections address, among others, divergent modern speculations about the origins and character of the institution; varied images of different Cypriot rulers in Greek and Latin sources as exemplary monarchs or as personalities prone to (decadent) oriental luxuries and/or violent acts; evidence on the political status, economic, religious and military activities and aspects of authority of Cypriot kings in the Classical period, when the institution is better attested.

Throughout the work, the discussion casts a wide net across a multiplicity of topics, questions and problems that relate to the history of the Cypriot polities and the activities of Cypriot kings during the four centuries long period examined, bringing together the widely dispersed and unevenly published testimony of classical, eastern and native sources. Thanks to Körner's detailed and critical exposé, the reader becomes aware of the evidence that is available in each instance, difficulties that are engendered in the interpretation of different documents, the biases of different textual traditions and authors, ongoing debates and, not least, remaining gaps in our knowledge. This is a most useful work of reference on a complex topic of interest to scholars, as well as students, of Cypriot, Greek and Near Eastern antiquity.

[1] George Hill: A History of Cyprus, vol. I, Cambridge 1940; e.g. Einar Gjerstad: The Cypro-Geometric, Cypro-Archaic and Cypro-Classical Periods, The Swedish Cyprus Expedition: Finds and Results of the Excavations in Cyprus 1927-1931, vol. IV.2, Stockholm 1948; Panaghiotis J. Stylianou: The age of the kingdoms: a political history of Cyprus in the Archaic and Classical periods, in: Mελέται καί Ύπομνήματα - Travaux et mémoires 2, Nicosia 1989, 375-530.

[6] For Persian concerns over Egyptian recalcitrance through much of the Persian period and intersections with Cypriot-Persian affairs, see in general Stephen Ruzicka: Trouble in the West: Egypt and the Persian Empire, 525-332 BCE, Oxford / New York 2012. For Persian concerns over Evagoras I's involvement in Aegean affairs in ca. 390, see now also Antigoni Zournatzi: Smoke and mirrors: Persia's Aegean policy and the outbreak of the 'Cypriot War', in: Salamis of Cyprus. History and Archaeology from the Earliest Times to Late Antiquity, ed. by Sabine Rogge / Christina Ioannou / Theodoros Mavrojannis, Münster 2019, 313-326.