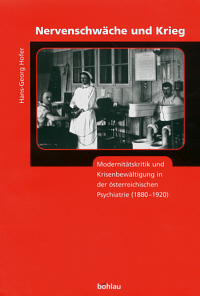 That the turn of the twentieth century was a "nervous age", a period whose remarkable cultural innovations occurred on the brink of a "nervous crisis", has become something of a truism in recent times. Historians' preoccupation with the putative nervousness of the years around 1900 can be traced back at least as far as a 1964 dissertation, in which Andreas Steiner wrote of medical and lay perceptions of nervousness in the "nervous era". [1] In a rather different vein, Frederic Morton's classic chronicle of a year in Vienna's fin-de-siècle labeled the period a "nervous splendor", and more recently Joachim Radkau gave the nervous woes of Imperial Germany a comprehensive cultural-historical treatment in his fascinating book on the "era of nervousness", the time between the founding of the German Empire and the rise of the Nazis. [2]

What was it about this period that made everyone so nervous? In general, at the risk of oversimplification, the argument goes as follows. In these years, as the full effects of industrialization and urbanization were felt, new technologies of production, transportation and consumption brought sudden and dramatic changes to Europeans' lives. The fast-paced conditions of an Americanized modernity overstimulated minds and nerves. Simultaneously, Europeans faced an uncertain political future as the new style of mass politics brought out darker, irrepressible forces, and as the threat of a European-wide war loomed on the horizon.

Of course these interpretations of fin-de-siècle culture originated in the period itself; Max Nordau famously diagnosed epidemic hysteria and degeneration among his contemporaries, which he attributed to the rapid pace of life and which he saw manifest in the period's debased cultural expressions, such as impressionism and Oscar Wilde style dandyism, to cite two examples. And George Miller Beard, a New York physician, observed growing incidence of neurasthenia, a pathological state of nervous depletion, which he traced to the particularities of the American climate and the cut-throat competitiveness of the American economic engine. And it was not only doctors who saw the deficiencies and strains of contemporary life reflected in the nerves. Georg Simmel's urban sociology pointed to the impact of life in the modern metropolis on mental and nervous health, and Robert Musil, among other writers, described the commotion and dissonance of the modern, "nervous era" in Kakania, his lightly fictionalized, satirical version of Austria-Hungary.

These connections between nerves and modernity - as drawn by contemporary figures and more recent historians - are the subject of Hans-Georg Hofer's impressive book, "Nervenschwäche und Krieg". One of Hofer's many contributions is to historicize these associations, and with particular attention to the case of Austria-Hungary, to elucidate their national specificity, social and cultural meanings, and professional bases. Nerves were, indeed, a flexible metaphor for the experience of modernity; the concept's imprecision and elusiveness, as Hofer shows, meant that it could carry widely different valences depending on national and social context. As formulated by Beard, neurasthenia was a positive sign, an emblem of American progress and the relentless drive of the American juggernaut. That middle-class American men suffered from nervous exhaustion attested to their superiority as a class and nation. Yet, when the diagnosis spread through Europe - Beard was translated into German in 1881 and caught on immediately - it became, at first, cathected onto the negative, degenerationist perspective of continental psychiatry. But the shifting professional landscape changed neurasthenia's connotations. While it might have represented a dead end as an area of research for academically ambitious neurologists - as in the case of Freud, only one among many to turn away from an early research project on neurasthenia - neurasthenia became a useful diagnosis for attracting bourgeois patients into private nerve clinics, and these became its major institutional setting. The turn-of-the-century neurasthenic, then, in the world of German-speaking medicine was likely to be an educated, upper middle-class man, one who worked with his brain and not his hands, and who suffered from what later generations would call stress or chronic fatigue, the modern malady par excellence.

What Hofer calls the "neurasthenia conjuncture", that is, a convergence of popular, professional and scientific discourses around nerves, reached its peak at the end of the century, and this episode comprises the first part of Hofer's book. In these years, Hofer argues, neurasthenia became a trendy disorder among a class of patients who approached medical treatment as a consumable product. Significantly, it gave bourgeois men an appropriate and socially acceptable space for showing weakness and pain, and it simultaneously served a group of physicians who benefited from the regular office visits of these affluent, chronic sufferers, many of whom were themselves doctors. More broadly, it established a widespread medicalized discourse for conceiving of modernity and articulating discontent with its far-reaching, and ultimately ambiguous consequences. However, the neurasthenia conjuncture had petered out by the early years of the twentieth century. The nerve chimera proved impossible to crack for medical science - the vagueness which allowed it to be so widely diffused also prevented any kind of medical consensus about its true definition and nature. Also, doctors lost faith in the powers of electric current, consistently the therapy of choice against neurasthenia, and nerves turned out to be a medical cul-de-sac by the first years of the twentieth century.

That is, until World War I generated a new set of crises for Austrian nerves and Austrian psychiatry, and these crises are the subject of Part Two. The war brought renewed medical and popular attention to nerves, and once again nerves emerged as a privileged discourse on modernity, becoming, in this case, a language for expressing the interrelationship of modern war and the health and strength of the nation, and alternately, a venue for deriding the enemy. Nerves, in other words, gave doctors the authority to involve themselves in questions of larger social and national significance. As Hofer and others have shown, war was widely perceived as the ultimate antidote to the nervous crisis of the turn of the century. With tragic ignorance, medical and political figures celebrated the coming war as a "Stahlbad der Nerven", an ordeal which would steel the nerves and strengthen the will of a nervously weak and soft generation. The tens of thousands of cases of nervous breakdown - otherwise known as war neurosis, war hysteria, shell shock, etc. - then necessitated what Hofer calls "nerve corrections", a series of often painful suggestive treatments intended to restore soldier-patients to an active role in the war effort. Through these activities psychiatrists were able to expand their influence and continued to raise the visibility and power, if not the prestige, of their profession.

Hofer has made an important contribution to the growing body of historical literature on nervousness, neurasthenia and war neurosis in Europe and North America with his deeply researched, thorough, and highly nuanced account. While some of the material he covers will be familiar to readers already immersed in this literature, he sheds a great deal of light on the previously under-researched case of Austria-Hungary, which experienced modern transformations and the ordeal of World War One in unique ways. Among the most interesting and original parts are his discussion of the prevalence of electric current as a treatment for war neurosis in the multi-ethnic Habsburg Monarchy, where doctors often shared no common language with their patients and thus had to eschew therapies based on verbal communication. Equally engaging is Hofer's re-examination of the notorious Wagner-Jauregg trial, in which one of Austria's leading psychiatrists faced censure for the conditions in his clinic and his allegedly brutal wartime treatments. Here Hofer convincingly rewrites the prevailing narrative which had been constructed through Freud's participation in the proceedings.

Above all, what distinguishes Hofer's book is its depth, rigor and analytical sophistication. His multi-layered discussion incorporates both doctor and patient perceptions of nervous illness, examines psychiatric, sociological and literary perspectives on modernity and nerves, keeps gender-historical concerns, especially the history of masculinity, in the foreground of analysis, and develops both the turn-of-the-century and the wartime contexts. Indeed, he consistently (and persuasively) insists on a historicist approach to the question of nerves, and this ultimately is what makes Hofer's book superior to existing works, which tend to retrospectively diagnose past suffering, condemn the ethics of wartime psychiatrists, or fixate on key turning points in the reception of Freudian psychoanalysis during and after the war. Despite several minor criticisms one might raise - occasional repetition, perhaps insufficient elaboration of the historical peculiarities of Austria-Hungary and "Viennese modernity", and an unsatisfying discussion of eugenics and the problem of "race hygiene" - Hofer's book is one of the richest and most nuanced works in the historiography of war, modernity and mental medicine and will be of equal interest to historians of science and cultural historians of Central Europe. Scholars will no doubt continue to conceive of the turn of the century as a "nervous era", but now they should have a greater understanding of what they are talking about.