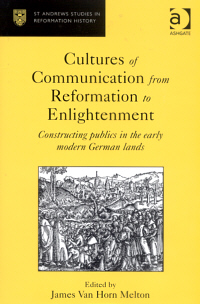 Based on a conference held at Duke University in 1998, this edition is, in a sense, a tribute to Bob Scribner and the innovative historical research he promoted. The volume is primarily meant to promote interdisciplinary work, focusing on ways in which structures, practices and media of communication served to transform culture, society and politics in early modern Germany. Approaching a well-delineated area, both geographically and in terms of subject matter, the articles in this book are organised according to theme rather than chronology, covering images and visual culture, music, court ritual and its dissemination through print, the popularisation of crime, confessional identity, confessional discipline and the relationship between popular and elite culture. Consequently, this collection examines communicative cultures and media through which values, norms and beliefs were expressed, formed and performed. Ultimately, the essays in the volume seek a broader understanding of the semiotic world of the early modern period.

Focused broadly on the public sphere, the essays in the volume are meant to refine the historical model constructed by Jürgen Habermas in 1962, which assigns religion little, if any role as a constituent element of the public realm. [1] This collection of essays attempts to see whether the confessional struggles of the previous centuries, expressed through pamphlet wars, debates and appeals to lay "public opinion", contributed to the cultural transformations associated by Habermas with a later era.

The volume further draws on scholarship which discusses the relationship between print and the spread of the Reformation [2], taking into account Scribner's suggestions concerning ways in which the printing revolution led to the dissemination not only of words but also of images. This fostered a sceptical attitude towards the well-established, but facile contrast between a Protestant "culture of the word" and a Catholic "culture of the image". Whatever the media deployed, historiographical focus has shifted to understanding, not only the message the authors sought to convey, but also how the audiences understood and used them. The Reformation is consequently seen as a process of appropriation. This brings to mind French scholarship in this field, such as the works of Roger Chartier and Michel de Certeau, who look, not just at the texts, but also at how different audiences appropriated them. This view has also fostered a degree of detachment from the "confessionalization" thesis and a re-evaluation of the construction of confessional identities. [3] While heeding Heinz Schilling's warning of conflating church discipline and the social disciplining process, these processes are seen as embedded in communal structures, as filtered through a local lens in which religious sensibilities, rivalries within or between communities and patterns of wealth and kinship were decisive in determining compliance or resistance. Thus, the gulf between popular and elite culture is diminished. From this perspective, the volume dovetails in its approach with Robert Wuthnow's work. [4] In his definition, the process of articulation is characterised by a delicate balance between the products of culture and the social environment in which they are produced.

Printing seems like an especially important theme for a volume devoted to cultures of communication. Print was one medium through which individuals and institutions constructed publics and communicated with an audience. Reformation scholars continue, to some extent, to acknowledge the decisive role of printing in the diffusion of Protestant ideas, while historians of the print "revolution" highlight the impact of the new technology on the origin and development of the Reformation. Although this truth is acknowledged by the editor and the contributors to the volume, none of the essays in this collection deal specifically with printing. However, the relations between the printed word and other media of communication are constantly highlighted, while the contribution of the printing press as a means of communication is strongly stressed. Printing very easily served to unify an audience that was in fact dispersed and unseen, highlighting the need of an early modern society to forge bonds across differences of experience, conviction and place.

Printing was always in an ambivalent and rather tense relationship with orality, and a genre which successfully highlights this dilemma is the sermon. The volume primarily addresses the function of sermons, understood as foci of worship and public events, while the importance of the pulpit as an arena of debate and confrontation is underlined. The sermons thus played an important role in the mobilisation of the people, for example fuelling anticlericalism, as is shown in William Bradford Smith's essay. The essays which use sermons as their primary sources succeed in challenging the notion that the sermon in Lutheran orthodoxy was abstract and divorced from everyday reality. In this sense, the Strafpredigten in Strom's essay are understood as a failed attempt by the Lutheran clergy to reassert their ecclesiastical authority and re-christianise society.

The use of non-textual media of communication is another broad theme that runs through the volume. Andrew Morrall, who focuses on the iconographic universe of Jörg Breu the Elder, cautions against making too sharp a distinction between the didactic symbolism of Protestant painting and the emotive sensualism of pre-Reformation art. While he convincingly explores the responses of artists to the changing nature of worship and the ways in which the visual culture of early modern Protestant Europe was born, Morrall emphasises Breu's continued indebtedness to the visual, affective traditions of Catholic art. Communication through ritual (the subject of Jill Bepler's article) shows how potential political instability could be counterbalanced by adherence to a strict ceremonial, which tangibly demonstrated dynastic continuity. Finally, Susan Weiss suggests that, if Protestant print culture accelerated the diffusion of words and images, it also facilitated the circulation and standardisation of music.

The volume also addresses the use of public space in constructing the identity of communities at various levels, for instance, the uses of public fountains as expressions of civic self-consciousness, as means of communication and powerful arbiters of religious and political ideologies, as explored by Donald McColl. One fruitful avenue of investigation is the use of ritual, for instance the vitality of pilgrimage piety, analysed by Marc Forster. This could go a long way towards strengthening Catholic identity, as pilgrimage practice was part of the diverse and dispersed world of local Catholicism.

A subtler understanding of social discipline and confessionalization is obvious in several of the essays. Jonathan Grieser's article on early modern Tyrol describes the ability of a dissident confessional community to resist Catholicisation through lies or outright flight. Robert von Friedeburg's essay on the relationship between church authorities and the laity in eighteenth-century Caldern (Hesse) cautions against viewing confessional discipline as a one-way street, while Andreas Würgler's article explores the compliance of the community with the rules set by the authorities, manifest through denunciations. Moreover, these essays go a long way towards a better understanding of the place of clerical authority in early modern Protestantism within the framework of social and ecclesiastical disciplining and the self-definition of the clerical class. While refining views on confessionalization, the volume contends that a culture of communication developed among early modern Germans which was either directed against the territorial state, the confessional church and its doctrine or at least beyond their reach. It thus approaches the relationship between officially imposed regulations and traditional practices, the interplay of popular and elite culture.

Martha Baldwin challenges facile distinctions between the two in her essay on transformations in seventeenth-century medical literature, describing the boundaries between learned and folk medicine as surprisingly fluid. Ann Tlusty's study of violence and honour in Augsburg taverns similarly underscores continuities between popular and elite attitudes. Susan Karant-Nunn views the disjunction of the human and animal sphere as part of a regulatory elite discourse intent on drawing distinctions between town and country, cultivated city dweller and uncouth peasant, self-controlled male and disorderly female. Besides pointing out a bizarre inconsistency in Protestant thought, as Protestants were not so quick to disbelieve in the reality of diabolical magic (although condemning it) as they were to repudiate the magical dimension of medieval Catholicism, Charles Gunnoe's study shows that discourse produced at elite level failed to shape public opinion and attitudes at popular level.

Although it is difficult for such a collection to maintain its coherence, this particular endeavour succeeds to a large extent, as all the essays are linked by a similar understanding of communication in terms of an exchange between discourse and audience. The almost astonishing variety of the subject matter, which could in theory have proved detrimental to the focus of the volume, ultimately serves to highlight the major points it wishes to make, as all the articles deal in some way with the forging of discourse. The underlying assumption is that all discourse is a construct and all records, texts or images are strongly imprinted with cultural codes, marked by concern for audiences, tailored to their expectations and forged in terms of effectiveness. Following in the footsteps of Natalie Zemon Davis' inspiring study of fiction in the archives, several essays consider that narratives include a range of messages. This concern for issues of reception and impact dovetails with interest in the formation of religious identity. For example, in pilgrimage piety one can identify the close interplay between the everyday experience of popular Catholicism and the development of Catholic identity. Most important however, the collection highlights the two-way direction of communication. The case of the miraculous pilgrimage place at Steinbach (Forster) and the relation between learned and popular medicine (Baldwin) bring to the fore the very realistic attitude of an elite willing to accommodate folk culture. The story of Steinbach demonstrates the power of the laity over the nature of Catholic devotion and highlights the inability and unwillingness of the clergy to control and regulate religious practice. The elite were the forgers of discourse but they were ready to use popular practice if it suited their aims. In a sense, even the extensive surveillance machinery and the use of denunciation testifies to the state's interest in information from below.

The volume engages with current historiographical debate on several levels, sometimes contending with traditional and even more recent views. The collection fits into an increasing interest in printing and its impact [5], renewed interest in preaching and the sermon, interest in music as propaganda [6] and interest in public space. [7] The collection deploys current concepts, such as that of "mobilisation", whereby discourse can be used to create communities, to mobilise the audience and determine it to act. This is equatable to efforts to provide the "common people" with a programme for social and political action.

Published at a time when religious communication and cultural exchange have benefited from increasing attention in historical debate, the volume has the merit of bringing together scholars from different fields, such as history, art history, literary studies, musicology, the history of medicine, and persuading them to think about the same subjects within the same broader theme of communication. The volume also has the merit of having a sound theoretical framework, being grounded in conceptual debates to a much more significant extent than is usual in English-language historiography. Furthermore, the collection is remarkable in its effort to capture the "common man", thus providing a view from below rather than a top-down one on communication and cultural exchange. Moreover, the volume is informed by gender discourse and helps unravel a complex history of both male and female early modern Germans.

The essays in the volume manage to contribute to the refinement of the theses announced by the introduction as the major bones of contention. Thus, the collection succeeds in pushing the boundaries of our understanding of the early modern period one step forward.

[1] See Jürgen Habermas: The Structural Transformation of the Public Sphere. An Inquiry into a Category of Bourgeois Society, Cambridge 1989.

[3] Such as seen in the work of Marc Forster, David Luebcke, Heinrich Richard Schmidt and Bruce Tolley.

[4] See Robert Wuthnow: Communities of Discourse. Ideology and Social Structure in the Reformation, the Enlightenment and European Socialism, Cambridge, Mass. 1989.