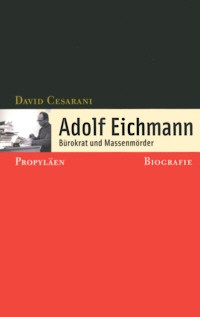 There is something about Eichmann that has caught the attention of our age. Of the many tens of thousands of Nazi era criminals, his name is firmly lodged near the top of the list of the infamous. On a list of destructive statesmen, vicious generals, demagogues, brutal leaders of bloodthirsty men, he stands out for his blandness: a mediocre non-entity who became a metaphor for evil, as few others have. It was not for nothing that when an unimportant American professor at a minor university wished recently to claw into national prominence with his petty political views, he did so by stating that the toppled towers in New York had been full of "many little Eichmanns". [1] No other name would have had quite the same effect.

While Eichmann's deeds were as despicable as any, he had many comrades in vile. It was a unique combination of horrific crimes, the startling and disquieting normality of the criminal, the drama of his destiny, and the power of one of his chroniclers that created the lasting power of his notoriety.

Cesarani captures this story well. The horrific crimes are described in detail, and - building upon the cumulated research of many of his predecessors - for the first time their full gamut is presented in one portrait. The minor, almost imperceptible crimes of joining the SS in 1934, and then the SD in 1934. The rather academic crimes of becoming an expert of hatred in the "Judenreferat" of the SD between 1935-38, where he uncritically imbibed hatred of the Jews and inculcated it in others. The brutal participation in stampeding of the Jews of Austria into exile with poverty, where his genius revealed itself as a combination of organizational ability, ruthlessness, and a cynical determination to take ideas from his victims and implement them against themselves. The callous ability to uproot entire communities, mostly Poles, between 1939 and 1941, Cesarani correctly notes, has often been overlooked by the previous tellers of Eichmann's tale, detrimentally so since it was a crucial stage in Eichmann's evolution. The bloodcurdling cold efficiency - indeed, a novum in human history - with which Eichmann rounded up the Jews of Central, South, and Western Europe and sent them to their deaths. The pitiless persistence of destroying the last European community still standing, in Hungary in 1944.

Cesarani also does well to balance the normality of the early Eichmann and the extreme criminality of his later deeds. There was nothing particularly unusual about the young Eichmann, although the political culture he grew up in does not resemble ours: he took anti-Semitism for granted, and his ability to join the Nazis was not a break with a democratic upbringing, which he never had. Becoming a genocidaire, however, took more than merely having the wrong upbringing. Cesarani does not flinch in depicting the intensity of Eichmann's malice, emphasizing that the man owned his deeds, and perpetrated them knowingly and intentionally.

Having told the story of Eichmann the criminal, Cesarani then carries on with the story until its dramatic denouement, as Eichmann's ashes were dumped unceremoniously into the Mediterranean beyond Israel's territorial waters. The squalor of Eichmann's Argentinean years, his harking back to the days of glory, his capture and fair trial at the hands of his erstwhile victims - all these contributed significantly to the drama and the staying power of his story.

The culmination of the story, that ensured its permanent place in the cultural memory of the West, was the intervention of Hannah Arendt. As Cesarani points out, to an extent the controversies she launched were so powerful they became the starting point of the entire academic branch of Holocaust studies. Her accusation that Jewish leaders unintentionally served the Nazi destruction machine ignited an explosion of Israeli research into the story of the Jewish behavior under Nazi persecution; her portrayal of Eichmann as a thoughtless non-entity sucked into a maelstrom of criminality by the potency of totalitarianism demonstrated that study of the Holocaust had universal implications, and was a worthy field for academic and intellectual engagement.

Adolf Eichmann, Bürokrat und Massenmörder is not a research book, and it contains little that is new by way of historical facts or documents. Rather, it is a thoughtful book. Having read much of what his predecessors found, Cesarani's project is to find a new meaning in it. As he says, near the end: the purpose of the book is to explain how Eichmann the ordinary German became a genocidaire. [2]

Yet, he doesn't quite succeed in doing this. The final paragraph of the book sums up the different way of explaining Eichmann postulated by each of the generations since 1945. The world that had routed Fascism and seemingly done away with genocide told itself that Eichmann and his sorts were aberrations or pathological types. Later on, when it became obvious he was actually a rather ordinary man of his generation, he was explained in terms of the corrupting power of totalitarianism. In a world threatened by nuclear destruction he exemplified the unthinking bureaucrat who could unleash unlimited destruction from the remoteness of his desk. Then further research found that he had actually not been so remote at all. In the 1990s it became obvious that genocide can flourish in contexts that have nothing to do with totalitarianism, and indeed, genocidaires seem to spring up in all sorts of contexts, leading Cesarani to his final thought: that "Eichmann appears more and more like a man of our times. Everyman as genocidaire". [3]

Which of course isn't much of an explanation, is it, beyond the insinuation that any normal person might become one should they find themselves in the wrong historical context.

Perhaps it is time for the historians to admit the limits of the explanatory power of their trade. The practice of their vocation consists of wondering about connections between causes and results, seeking documentation that can throw light on these causes, and testing the strengths - documentary and logical - of proposed connections. In all of this there is an element of determinism: people in an identified set of conditions are likely to respond in a predictable way. Often, this seems to work rather well. However, it does inadvertently limit the room for that most basic of human characteristics, the one that distinguishes them from instinct-driven animals: free choice.

Eichmann and his ilk murdered the Jews of Europe because they chose to do so. Other members of the very same society chose not to do so, in spite of living in the same set of historical circumstances. The search for the precise combination of forces that resulted in the choice is crucial - I have participated in it myself these past twenty years. As Cesarani's ultimate failure of explanation well demonstrates, however, there are limits to our power of explanation, and we may have to turn to other disciplines for assistance; even this, however, will ultimately fail. Precisely because the will is free, there will always be those who choose to use it as they do, irrespective of what we expect from them.

[1] In January 2005 University of Colorado professor Ward Churchill sparked a fierce controversy about freedom of speech, public funding of institutions of academic learning and other matters when he said that many of the victims in the World Trade Center on Sept. 11th had been "little Eichmanns". As of this writing, Google offers some 25,000 links to the ensuing controversy.

[2] The final sentence of the "After Eichmann" chapter in the English original (356) says specifically that this has been the point of the book. The German translation leaves out that half of the sentence.

[3] Page 368 in the original. Unfortunately, the German version has a very different final paragraph - a far less interesting one.