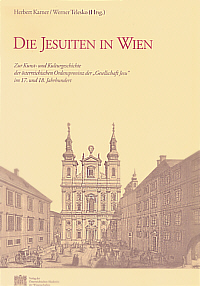 Die Jesuiten in Wien, a collection of essays themed around the history of the Jesuit order in Vienna, has its genesis in an October 2000 symposium that suitably commemorates the shared history of the Vienna Jesuit College and the University of Vienna, founded in 1365. The pedagogy of the university was significantly affected by affiliation with the order, a process which resulted in the incorporation of the Jesuit College into the university in 1623. The period that spans the establishment of the Jesuit Order in 1551 under Ferdinand I to its dissolution under Pope Clement XIV in 1773, provides a rewarding case study for the significant educational and artistic influence of the Jesuits in central Europe during the early modern period.

Bringing together a variety of approaches and methodologies, the collected essays deliver both broad analysis of the Jesuit mandate and specific examples of art and architectural projects. Subjects range from the introductory to the specific, such Jörg Garms' evaluation of major archival resources related to Jesuit studies in Vienna. Kurt Mühlberger provides an historical overview of the relationship between Jesuits and university. He traces the shift from an early Renaissance "golden age" of humanism at the university to the detrimental effects of economic and religious upheaval of the first decades of the sixteenth century. This provides grounds for the arrival of the Jesuit College and a gradual encroachment of faculty members who are ideologically in step with the Counter-Reformation. Other articles that report on major architectural renovations and contextualize decorative programs can then unfold against the historical backdrop that Mühlberger provides.

The various media of Jesuit action are brought together in studies that span architecture, printed image and ephemeral display. Several articles examine the relationship between architecture and decorative program while also touching on the question of a specifically Jesuit approach to art. Werner Telesko lays out the compact between iconographic program and illusionistic device, a standing tradition in Jesuit churches most notably executed in the Gesù and St. Ignatius in Rome, but here translated to the ceiling frescos of the University Church in Vienna. The program combines narratives related to the birth of Christ, executed in quadri riportati, with illusionistic depictions of the Assumption of Mary over the altar and ending with the Fall of Angels at the exit.

Unlike the ceiling frescoes at the Gesù and St. Ignatius that encompass the entire central vault, Andrea Pozzo's frescoes in Vienna's University Church divide the ceiling into illusionistic shafts, separating out individual scenes. These separations then correspond to the movement of the viewer through the space in tandem with his experience of the liturgy, an idea that Howard Hibbard, Rudolf Wittkower and Irma Jaffe already proposed for Vienna's Roman counterparts (79). The compartmentalization of the experience, however, differs from the Gesù or St. Ignatius and Telesko posits that the rhythm produced by shifting representational devices and architectonic separation, pulls the viewer forward to the only point at which the illusionistic dome can be experienced.

Although an intuitive experience, the program is also necessarily tied to a text. Importantly, the viewer is not just any churchgoer, but the young students of the university who are receiving visual lectures on the inevitable triumph of the Counter-Reformation against both Protestants and Turks. The program thus also is entwined with contemporary political events, from the military, such as the victory against Protestant forces at White Mountain in 1620, to the less dramatic but equally consequential expulsion of Protestant professors from the university in 1627. In a carefully constructed yet gracefully accomplished article, Telesko shows how the iconographic approach remains essential to contextualization.

Using a similar method, but different medium, Sibylle Appuhn-Radke traces Jesuit adaptation and appropriation of earlier iconographies. The IHS device, perhaps the most recognizable of Jesuit symbols, has an older history of Franciscan use. The gradual accommodation and replacement of Catherine of Alexandria as patroness of higher learning is less well known, but is evidenced through a number of paintings and engravings. The printed medium, crucial to the Jesuit educational agenda, becomes the subject of a number of articles in this volume.

Despite decades of debate over whether a clear Jesuit architectural style can be discerned, Evonne Levy revisits the issue of the modo nostro. Her article on the distinctive quality of Jesuit architecture makes clear, that the issue continues to demand consideration, but on fresh terms. According to Levy, a Jesuit style is not something easily defined through form, but rather generates from men who were already thinking and acting in a concerted effort to produce structures, are they architectural or educational, that would promote the Jesuit program. The issue of a Jesuit rhetoric that cannot be encapsulated as a style is the subject topic for Markus Hundemer. Both authors demand that the issue of Jesuit art be framed as a debate over intention rather than as a program of pre-ordained stylistic devices. Levy's interest in a Jesuit "formulation", a process of invention, rather than a specific tangible form subtly revives the old debate and makes it relevant once again.

The adaptive ability of the Jesuits, long ago laid out by Joseph Braun (231), can also now be applied to central European issues. It certainly is no coincidence that, as in Bavaria under Albrecht V, the prevailing powers recognized the unique abilities of the Jesuits to defend central Europe against the Reformation, but also to uphold their own political infrastructure. The establishment and promotion of the Jesuit College in Vienna practically echoes Albrecht's endorsement in Ingolstadt and Munich. More than any other order, the Jesuits were ideally suited to maintaining, consolidating, and expanding the power structure of Ferdinand I in Vienna and Albrecht V in Bavaria, an ability that could not have existed without an adaptability at the local level coupled with a centralized vision of the final goal.

Irrespective of the variety of approaches brought together in this volume, there is one thing that this book makes clear. The combined Jesuit program of education, building, and artistic persuasion did not proceed arbitrarily, but according to a well-conceived plan that has the disciplined approach a tightly organized military campaign. The call for obedience was not just superficial; membership in the order implied a deeply imbedded belief system that meant highly similar solutions would be found regardless of geographic or cultural variety.

What many of the articles seem to reinforce, is that the Jesuit formulation, not necessarily visible as a style, was evident in an approach that could be employed on the local level. Rather than viewing the dictates of the Jesuit order as emanating only from Rome, many of the materials collected in this volume point to a different approach to Jesuit art, one that recognizes the formulation, or process, of Jesuit intention over the bits and pieces of decoration, ground plan, or iconography that could be called a style.

Whether accurately or not, southern Baroque art and architecture has long been paired with the parallel development of the Jesuit order. Many of the issues raised in Jesuiten in Vienna come out of decades of scholarly debate over whether such a focus is appropriate. The Jesuit appreciation that art can transform into the sort of tangible spirituality advocated by the Spiritual Exercises is not unique to their order, but they were able to implement their educational indoctrination with an unprecedented thoroughness. Comprehending the nature of Baroque art is undeniably intertwined with understanding Jesuit doctrine.

After nearly a century of engagement with the question of a Jesuit art, a coherent picture of the vital nature of their effect on central Europe has been, with a few exceptions, lacking, making this collection of essays crucial to expanding the discourse outside of Italy. Covering a broad historical period and wide range of approaches focused on one city, this volume presents a tantalizing invitation to further study this rich area of central European art and architecture.