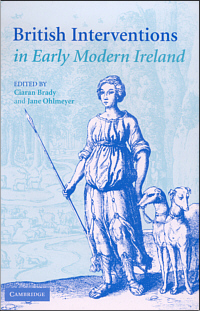 Festschriften are usually less and more than the sum of their parts: less, because a unifying theme rarely emerges from what are individual contributions; more, because those individual efforts frequently express a shared methodology or understanding of a particular subject. Inasmuch as they are written in honor of a particular scholar, they tend to be a coda to, or resonance of, the honoree's work. All of that is true of British Interventions in Early Modern Ireland, a volume of essays for Aidan Clarke, the Lecky Professor of Modern History Emeritus at Trinity College, Dublin.

In a jointly written introduction the two editors claim that their Festschrift "aims merely to offer a collection of new perspectives on the period" (27). Ciaran Brady provides the first example with his essay on the attainder of Shane O'Neill. A notorious rebel, Shane was murdered in 1567, but posthumously attainted two years later. Brady sees a novel, extra-ordinary, and controversial policy in this means of dealing with the already deceased Shane.

Harold O'Sullivan discusses "processes of assimilation and division in the marchland of south-west Ulster" and concludes that at the Restoration of Charles II in 1660 "the Irish of the counties of Monaghan and Armagh disappeared as landowners" (71). It was not, in his view, the peasants but "the landed [Catholic] gentry who really suffered" and were replaced "in the main [by] second generation [English and Scottish] colonists of the Ulster plantation" (72). Helga Robinson-Hammerstein asserts that a humanistic concern for the bonum commune underlay the sectarian character of Trinity College, Dublin (founded 1592), and in that regard finds Ireland's first college similar to four universities founded about the same time in Germany, two Catholic and two Protestant.

Brian Jackson contributes an essay on a religious controversy in Dublin in the years between 1599 and 1614. The disputants were an Irish Jesuit, Henry Fitzsimon, and the Protestant then-Dean of St. Patrick's Cathedral, John Rider. The crux of their disagreement - shared by many of their co-religionists - was over Protestant claims to be the true descendants of the early Church fathers, and insistence that Irish (and all Roman) Catholicism represented egregious deviation. Instead of being prosecuted as a heretic or traitor, Fitzsimon was "merely bundled out of the country", suggesting that "Dublin would appear to have been a safer place to voice dissent than London, Paris, or Rome" (103). Jackson concludes that "our received view of the Irish Counter-Reformation as heroic national struggle, led and directed as a uniform clerical initiative" may be an oversimplification (ibid.).

The fore-title of R.J. Hunter's, "The Bible and the Bawn" stands for the twin programs of Protestantization and plantation in seventeenth-century Ulster. These programs overlapped in the case of the Reverend Edward Hatton, one of nineteen "painful preachers" that George Montgomery, the Church of Ireland bishop of Derry was permitted to bring from England and Scotland to aid with the propagation of the faith. An Englishman and Cambridge graduate, Hatton removed to Ulster about 1614. By his death in 1632 he had become archdeacon of Ardagh, a substantial land owner, and a justice of the peace. Hunter offers this episode as "a case study in the exercise of power on one estate in Plantation Ulster" (130).

Alan Ford investigates the relationship between "Archbishop Laud and Trinity College, Dublin". Charles I's last Archbishop of Canterbury "not only reformed the Irish university's constitution; he also decisively reshaped its religious outlook away from Calvinism to a committed Arminianism" (136) Ford looks for "what this intervention tells us about Laud's wider motivations and religious outlook" (ibid.) He contrasts Laud's moderate and "practical" reform of the University of Oxford's statutes with the fierce assault he launched on those of the infant Irish University. There, Laud aimed to create "a clericalist, sacramentally based, liturgically rich, non-Calvinist church, half-way, as Chappel put it in his autobiography, between Rome and Geneva" (160).

Jane Ohlmeyer's essay sets out to explain how the Irish peers sought to reverse Thomas Wentworth's notoriously low opinion of them when he served as Charles I's Lord Deputy, and how they "orchestrated their own onslaught against ... [him]" in the Parliaments in Dublin and London, and at the royal court at Whitehall (162). The essay anatomizes the Irish kingdom's complicated polity on the eve of the 1641 rebellion, and underlines how consequentially it was transformed in the two decades that followed.

The chapter that follows, "The Irish elections of 1640-41" by Brid McGrath compliments Ohlmeyer's theme of political transformation after 1641. The most Protestant of seventeenth-century houses of commons (161 Protestants to 74 Catholics in early 1640) as a consequence of by-elections gradually became more Catholic. But in the aftermath of the October 1641 rebellion, many of the Catholic members took places in the rival assembly of the Confederate Catholics at Kilkenny. And at the Restoration only one Catholic was elected, to be denied his seat in an Irish Commons that was then exclusively Protestant.

Micheal O Siochru takes up the subject of "The Catholic Confederates and the constitutional relationship between Ireland and England, 1641-1649", arguing that "while in 1641 Irish MPs may well have retained the mistaken belief that Poynings' Law still benefited parliament, the Confederates did not share such illusions" (229). O Siochru sees the Confederates' commitment to the goal of an independent Irish Parliament as less qualified than Aidan Clarke suggested in an essay on Patrick Darcy published in 2000.

Robert Armstrong deals with the anomaly that, by 1646, "the Irish capital had become, however briefly, not merely an isolated religious outpost in Ireland, but the last bastion of a form of church order and worship within the Stuart realms" (230). Soon, however, most of the Church of Ireland bishops fled to England, and Dublin was surrendered to Parliamentary commissioners who prohibited the Book of Common Prayer. The years that followed amounted to what Armstrong terms "effective disestablishment", but the reader is given little sense of how "in the end the Irish church produced enough 'sufferers' to man many of the more senior offices of the restored church of the 1660s" (251).

In "The Crisis of the Spanish and Stuart monarchies in the mid-seventeenth century" Geoffrey Parker focuses on four major mid-seventeenth century European rebellions against king Philip IV of Spain, and three against Charles I of England, Scotland and Ireland, suggesting seventeen "common denominators". These are all interesting to consider, but the one that predominates is that of ambitiously centralizing (and militarizing) monarchies stumbling over the conservatism of traditional communities. Parker's approach demystifies the experience of seventeenth-century Ireland, revealing its similarity to the experiences of other states whose fate it was to be constituent pieces of "composite monarchies".

Like Parker, Sarah Barber uses a comparative approach. Drawing on "the writing of Fra Jaime de Bleda on the explusion of Moriscos [from Spain] between 1609 and 1614" she compares it with "the exchanges between Vincent Gookin and Richard Lawrence over the proposed transplantation of Irish Catholic land-holders in the 1650s" (281). In both Spain and Ireland a centralizing state was trying to solve the problem of a potentially seditious population. In Spain that population was a minority; in Ireland a majority. Expulsion aimed to remove the Moriscoes from the Iberian peninsula entirely. Transplantation sought to remove land-holding Irish Catholics to the western-most portions of the island. The Spanish expulsion was far more successful in achieving its aims, but at considerable cultural and economic cost. The Irish transplantation failed, leaving the bitter memory of an intended injury.

Toby Barnard takes up the "fanatic zeal and irregular ambition" of Richard Lawrence, the defender of transplantation in the exchanges examined by Barber above. An Englishman, Lawrence came to Ireland in 1649 as an officer in the Cromwellian army and "subscribed wholeheartedly to the anti-Catholic and anti-Irish sentiments prevalent in England" (301). Unlike most of the Cromwellian invaders who went home, Lawrence settled in Ireland, and Barnard tracks his transformation into an Irish (rather than an English) Protestant. Barnard calls it "a surprising relocation for the upholder of English interests in the 1650s" (305). Increasingly Lawrence was willing to distinguish between "the more serious and better principled papists" and the adherents of the "bloody savage Tridentine principles" (307).

John Temple's famous tract, The Irish Rebellion, first published in London in 1646, is the subject of an historiographical essay by Raymond Gillespie. Originally intended to "stir up support in England for the dispatch of a military force", Temple's tract endured as an "important source of information about the untrustworthiness of the Catholic Irish" which could be recycled and recirculated in accordance with the needs of Protestant propaganda in later crises (316).

A concluding essay by Patrick Kelly treats "Conquest versus consent as the basis of the English title to Ireland in William Molyneux's Case of Ireland ... Stated (1698)". Did English rights over Ireland rest on the "conquest" carried out by King Henry II in 1171-2, or did they derive from a submission by the Irish kings of the time that was entirely voluntary, and involved reciprocal rights for themselves and their heirs? Molyneux argued the latter, hoping to justify a measure of independence for Ireland (or rather its protestant plantocracy) that was an implicit part of the original bargain. It was an argument that aroused much resistance in England, and Kelly helps us to understand some of the twists and turns of the controversy.

These sixteen essays constitute "new perspectives on the English in Early Modern Ireland" in the sense of being new, or up-to-date. But with the exception of those of Parker and Barber, which employ comparative methodology, they are reassuringly old fashioned. So, for that matter is the œuvre of Aidan Clarke, and this is said in no disrespect, but in recognition that progress in early modern Irish history still requires sedulous, exacting, investigative scholarship of a high quality. There is an abundance of it in this useful volume.