Michael Peachin: Frontinus and the curae of the curator aquarum 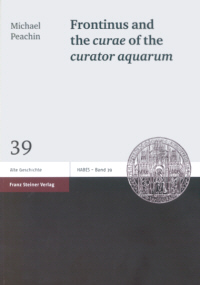 Why did Frontinus write his work on aqueducts? How generic or exceptional is it in the corpus of Latin literature? And finally, who was its intended audience? Although Frontinus and the Roman system of aqueducts have inspired rather sustained scholarly activity over the last few decades, Michael Peachin begins his monograph by acknowledging, "Frontinus' De Aquis Urbis Romae is a truly perplexing piece of writing" (1). Through a close reading of significant portions of the De Aquis, however, and with a particular focus on its conclusion, Peachin draws out a potential context for the essay and offers a convincing interpretation of the work. Rather than a technical treatise or encomium, Peachin reads Frontinus' essay as a kind of political pamphlet designed to warn the Roman elite against violating the water supply. He situates the tract within the context of Nerva's reorganization of the imperial bureaucracy and evaluates it as a dexterously presented public announcement of (and perhaps an apology for) a newly revised water policy.

The three main chapters of Peachin's monograph take the reader from Roman administrative writing, through close readings of many passages of the De Aquis [1], to Roman administrative attitudes and the context within which Frontinus was working. In light of the complexities involved in this technical material, Peachin sensibly equips each chapter with its own introduction and conclusion. Eight appendices conclude the work; in addition to a chronology of Frontinus' life and works, and a helpful "Suggested Outline of the De Aquis," other appendices provide catalogues of passages in the De Aquis, such as regulations pertaining to the cura aquarum or references to dishonesty and abuse of the aqueducts.

Following a brief introduction in which he reviews earlier interpretations of Frontinus' essay, Peachin proceeds to chapter two, "Frontinus and Roman Writing on Administrative Subjects." Here, his aim is to examine "the authorial categorization of this treatise" (12). He therefore evaluates Frontinus' definition of his work as a commentarius alongside other examples of technical writing. Peachin collects evidence for prior commentarii connected with the water supply but stresses that these, dating from Marcus Agrippa's tenure, appear to have been concerned primarily with lists of water grants to private individuals and figures concerning aqueduct capacity. Although significant portions of Frontinus' own work rely heavily on previous commentarii (Appendix 6 provides references) - indeed, his chapters supplying the statistics for aqueduct volumes and pipe measurements are likely updates of these records (19) - Peachin concludes that Frontinus' own treatise, because it lacks the list of water concessions and includes other topics and rhetorical embellishments, differs significantly from the commentarii that he consulted. Peachin seeks out other administrative writing as well and considers papyri documents and the Gnomon of the Idios Logos, but highlights the functional utility of these documents, which therefore, he argues, stand in contrast to the De Aquis. He ends his quest for parallels with the conclusion that "the very little [writing about administration] that eventually did exist bears no particular resemblance to the De Aquis" (32).

It is in chapter three, "An Administrative Announcement," that Peachin moves to the heart of his argument. The closing remarks of De Aquis, he finds, present the key to the intended audience and potentially to the motivation for the work itself. In these final lines, Frontinus addresses the elite who have been extracting water from Rome's aqueducts and notifies them that the period of administrative neglect is over; their right to siphon water from the aqueducts will not be taken away, as long as they present a proper request to the emperor. These closing remarks, characterized by Peachin as an "astonishingly sudden admonition" (36), point us toward a context for the De Aquis: a thorough examination of the aqueduct supply by the new curator aquarum. As Frontinus makes clear, "only those who stepped up now to receive this right officially, as a duly granted and recorded beneficium Caesaris, would be able to continue taking water without penalty" (37). Peachin is right to focus on the explicitness of this passage. His subsequent suggestion that the whole work could in fact be intended as a "kind of apology for the new policy" (37) regarding aqueduct water is intriguing and, when supported by his close reading of the De Aquis, quite appealing. He devotes the rest of the chapter to a sequential analysis of Frontinus' essay. Appendix 2, "A Suggested Outline of the De Aquis," complements this discussion well. At the conclusion of this chapter, Peachin reevaluates the essay as a whole. He suggests that, after a rather misleading introduction, the theme of the work comes forth gradually, to be fully and explicitly revealed only at the end (80). For modern readers, then, the conclusion holds the key; Peachin suggests that this ending may not have been a surprise for Frontinus' audience who, familiar with contemporary events, "surely knew much that we do not" (80).

With this reading of the De Aquis in mind, Peachin then turns to reconsider the author himself in chapter four, "Frontinus, Roman Administrative Attitudes, and Practices." Peachin submits other evidence for Frontinus - Pliny recording him as disavowing a funerary monument; his Strategemata (and lost De re militari); possible experience with surveying - but denies that any of this can tell us about Frontinus, the man. Peachin's aim to redress the characterization of Frontinus as a "hyper-administrator" leads him to conclude, "There may indeed have been some connection between Frontinus' administrative life and his literary efforts. To say any more than this, however, becomes dangerous" (95). Likewise, he stresses that we cannot determine "any particular work ethic, or [...] attitude toward administrative tasks" (97). Still, it may be overly cautious to say that we cannot deduce anything about this man who dedicated himself to writing at least three rather technical treatises. Peachin then turns to consider Roman administrative practices, a more fruitful line of inquiry. His analysis reveals limited attention devoted to the regulation of the water supply during the Republic, problems addressed on an ad hoc basis during the Augustan age, and a "significant lack of oversight" during the early empire. He suggests that it is under Nerva and Trajan that this neglegentia is corrected. It is here that Frontinus' work belongs.

In the final pages of the monograph, Peachin broadens his perspective to situate Frontinus and his work within the context of gift-exchange and the political structure of Rome. As Frontinus has made clear, water concessions would be approved as a gift of the emperor, a beneficium Caesaris, provided they were officially requested. Peachin thus characterizes the De Aquis as "all about an attempt to restore the proper mechanism of giving such gifts" (127), and indeed about "restoring the proper relationships between emperors and aristocrats" (140). With this monograph Peachin offers a thorough analysis of the De Aquis within the context of Roman administrative practice. Those interested in either the water supply or Roman administration more generally will find Peachin's work useful.

[1] Peachin cites his support for the title De Aquis Urbis Romae in a prefatory note (xi-xii). The manuscript tradition records other titles including variations on De Aquaeductu Urbis Romae or De Aquaeductibus.