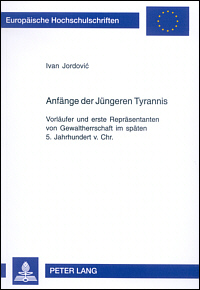 The book is the first monograph completely dedicated to the Younger Tyranny since E.D. Frolov's work was published many years ago. [1] It is carefully written on the basis of the author's extensive analysis of sources, including very sizeable literature on the subject. The work belongs to the presently discernible interest in tyranny and forms of rule alternative to democracy, some examples of which are the collections of articles published by R. Brock and S. Hodkinson (2000), K.A. Morgan (2003) and papers presented at the conference organised by S. Lewis in 2003, published after the release of the reviewed book. [2]

The distinction into the Older and Younger Tyranny adopted by Jordović appeared relatively early in historiography, in the works of W. Wachsmuth and H.G. Plass [3] and plays an important role in the perception of tyranny presented in the fundamental monographs on this phenomenon, authored by H. Berve, C. Mossé and E. Frolov. [4] Jordović does not devote much space to justifying this distinction. In the introduction to his book the author mentions that representatives of the Younger Tyranny, in contrast to their predecessors, appeared not in the main centres of the Greek world but in its peripheries; with minor exceptions they were not among the leading figures of the Greek world of their time; they held power in smaller or medium-sized cities, mostly with the support of a foreign power; they counted on mercenary troops whose generals frequently reached for power themselves; tyranny was sometimes not individual but collective.

Despite the opinion that the Younger Tyranny was characteristic for the peripheries of the Greek world, the author largely focuses on its Athenian forerunners - Alcibiades and the Thirty with their leader Critias. The Spartan Lysander also belongs to the forerunners, although Jordović chose not to discuss him in detail since, unlike in the other cases, there was no open break between him and his polis. The notion of periphery, obvious from the Athenocentric point of view especially in the 5th century, seems much less appropriate in the 4th century. The statement that there was a lack of outstanding figures among the younger tyrants is questionable. The author makes exception for Dionysius and Jason but one could ask whether Onomarchos or Alexander of Pherae who were in the historians' bad books, were not outstanding as well.

Jordović's book is comprised of two parts. In the first, "Die Bedeutung des Krieges, des geistigen Umfeldes und der Jugend für die Entstehung der Jüngeren Tyrannis", the author analyses the circumstances in which the Younger Tyranny developed. These circumstances were mainly shaped by the long and brutal war, especially the Peloponnesian War and in the case of Sicily also the Carthaginian War ("II. Der Krieg"). During these conflicts the previously observed standards of war-making ("II.1. Die Kriegsrechtsverletzungen") were broken by all parties. The brutal war left a permanent mark on the psyche of soldiers, contributed to disregarding social norms in the life of polis and to breakouts of acute internal conflicts which had a destructive influence on the social value system ("II.2. Stasis"). This was accompanied by abuse of language, using traditional political slogans to obscure the real objectives and physical violence. However, there is no validation of the opinion that an acute social conflict emerged in the course of this internal rivalry and was used by ambitious demagogues to take over tyrannical power. One of the direct results of these conflicts were many casualties among political leaders which frequently opened the way to a quick political career for young and ambitious politicians ("III.3. Die Fluktuationen innerhalb der Elite"). War often forced the delegation of more power than usually to individuals, leading to the concentration of power in the hands of those who had military success in difficult situations. This phenomenon could be observed even in Sparta, e.g. the career of the victor of Aegospotami - Lysander. ("III.4. Die Machtkonzentration"). The war also weakened polies causing substantial material losses, contributing to the spread of epidemic, leading to the death of many citizens and creating an atmosphere of resignation, uncertainty and fear for the future ("III.5. Die indirekten Auswirkungen des Krieges"). These undermined the solidarity of the citizens, faith in the common values and affected the internal stability of the community. In these circumstances young politicians, often debuting on the political scene, tried to take their chances. Although it is hard to talk about a generation gap, the author cites examples where the term "young" is to an extent synonymous with unscrupulous political acting ("IV. Die Jugend").

The author devotes a lot of attention to the connection between the emergence of the Younger Tyranny and the teachings of sophists ("III. Das geistige Umfeld"). It is believed that the sophist teaching, particularly the concept of the rule of the stronger ('das Recht des Stärkeren'), had a significant and destructive influence on the Greek social life. As the author observes, this concept, already visible in the much earlier Greek thought, only on the basis of sophism obtained its theoretical justification. Chronology indicates that this happened concurrently to the appearance of the forerunners of the Younger Tyranny. The teaching of sophists could have been one of the elements contributing to the mental climate favourable to pursuing tyrannical power at the end of the 5th century BC.

The second part of the work ("Die Vorläufer und ersten Repräsentanten der Jüngeren Tyrannis") presents the profiles of the forerunners and first exponents of the Younger Tyranny operating before 400 BC: Alcibiades, the Thirty, Hermocrates, Dionysios I, Lycophron of Pherae and Klearchos (chapters V-X). Presenting their profiles, the author analyses how their activity could have been influenced by the factors discussed in the first part, e.g. sophist teachings or possible social tensions in their cities.

This discussion is related to the very important issue of where the line between tyrannical rule and other forms of strong political leadership lies. In the case of Klearchos, Jordović observes that although we can find information on him establishing tyranny in Byzantium (Diodorus 14.12.2-3) it is not necessarily a conclusive argument about the nature of his rule in Byzantium. The author is right when he says that Klearchos taking over tyrannical power and becoming independent of Spartan control would have to mean that Sparta, at the peak of its power, easily conceded the loss of a strategically important city at a time when its relations with Persia were still good. Klearchos, having no external assistance or supporters in Byzantium could not have held on to power for long. Moreover, other authors led by Xenophon did not see anything unusual about Klearchos's position in Byzantium. Accusations of tyranny may perhaps be explained by the brutal treatment of the citizens, which according to Jordović could be attributed to the PTSD (post-traumatic stress disorder) syndrome described by L. Tritle. [5] The removal of Klearchos from Byzantium may in turn be linked to the opposition of the Spartan government to Lysandros and his supporters.

In the case of Klearchos, Jordović rightly observes that his tyranny in Byzantium was largely a creation of historians. In the case of Lycophron the author took a different stance, concluding that Diodorus's account describing him as the tyrant of Pherae is decisive. However, since the author rejects the image of Lycophron as Volkstyrann and admits he belonged to the aristocracy, it should be shown how his political leadership in Pherae differed from Medios's (and earlier Aristippos) in Larissa, about which he says that it resembled a tyranny. This issue seems a significant one for the whole book, because if the dominant position of aristocracy in the Thessalian cities is thought of as tyranny, or its collective equivalent of dynasteia (a term used by Thucydides 4.78.3) then consequently this necessitates a different approach not only to the problem of distinction into the Younger and Older Tyranny but also to the understanding of tyranny as such. There is no reason to assume that the political role played by the aristocracy in Thessaly underwent significant transformations between the 6th and 4th century BC.

To sum up, Ivan Jordović's book is an important and interesting study of factors contributing to the emergence of autocratic leaders as a consequence of the traumatic events of the Peloponnesian War. However, its author unnecessarily tries, a little artificially and on the basis of vague criteria, to distinguish a group which could be called tyrants among these leaders. It seems, though, that such a classification obscures the picture of the reality of the turn of the 5th and 4th centuries BC rather than helps to understand it. Tyranny, to quote Sian Lewis, seems "not so much constitutional position as a method of rule, potential within any political system". [6]