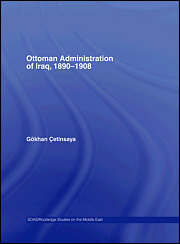 In his meticulously researched study, Cetinsaya scrutinizes the major issues which shaped the administration of Iraq during roughly the second half of the Hamidian era (1876-1909). Based on extensive research of both Ottoman and British archives, Cetinsaya's book traces the interaction between the empire's capital and arguably one of its most troublesome provinces. Ottoman efforts to regain control in Iraq have to be interpreted in three respects. First, due to administrative negligence and political unrest, the empire lost much of the tax revenue base derived from one of its most economically attractive provinces, an area with tremendous agricultural and trading potential. Second, Iraq increasingly became an arena of conflict between the Sunni Ottoman Empire and neighboring Shia Iran due to the conversion of a large proportion of the Iraqi population to Shiism. Third, England had strong geopolitical interests in the region.

From Cetinsaya's account, it becomes clear that there was unanimous agreement among Ottoman officials that administrative, military, infrastructural and educational reform were at the heart of unlocking Iraq's vast potential for achieving primarily agricultural development. However, due to the Empire's financial constraints and Sultan Abdülhamid's (1876-1909) unwillingness to resort to large-scale foreign loans because of bad experiences from the 1870s, most reform proposals were only carried out half-heartedly, if at all. One of the provincial bureaucrat's major suggestions for structural reform, the unification of the three provinces of Mosul, Baghdad and Basra under one central administration situated at Baghdad, was continuously rebuked by the Sultan out of fear that this would run counter to his own centralizing measures by putting too much power into the hands of one single governor.

Another structural problem of the provincial administration was that its military, financial and political sections were not unified into one overarching bureaucratic structure, but rather were responsible to and therefore only reported to their respective ministries in Istanbul. As a result, the respective offices did not communicate well and personal animosities often robbed Ottoman provincial officialdom of much of its effectiveness. If problems with the local power structures, such as tribes, Sufi orders, landowners, etc. arose, Abdülhamid normally used an accommodating approach instead of resorting to violence. In fact, he usually tried to co-opt the local leaders by granting them positions and gifts. This approach owed very much to the simple fact that the Ottoman's 6th Army in Iraq was permanently under-staffed, badly equipped and of dubious reliability due to chronic arrears in the payment of their salary. To a certain extent, this "crisis management" method met with a degree of success. However, in some areas, especially in the Kurdish regions of the north, tribal strife became endemic.

Thanks to his extensive use of the archival sources of the Ottoman central administration, Cetinsaya is able to provide valuable insights into its sometimes odd workings. One example is the story of Nusret Pasha, from the Sultan's entourage, who in spite of his unquestioned loyalty to the Sultan was exiled to Baghdad in 1886 due to his permanent "troublemaking" personality. Unsurprisingly, once he arrived in Iraq he started making trouble again. By primarily acquiring land and real estate illegally, he caused a plethora of complaints from provincial notables and officials to the Porte, with many asking for his transfer to another province. This went on for years and at times occupied much of the administration's energy. Obviously of somewhat choleric character, Nusret responded poorly, even repeatedly beating various officials in their offices in front of witnesses, among them the Kilidar ("Keykeeper") of the shrine at Samarra. After years of petitions, the Sultan finally reacted by, among other things, setting up an investigative commission led by Nusret's own son (52-57).

This serves as a good example - among many others spread throughout the book - of the importance of personal networks in the Sultan's court. In the study of the history of the Middle East network analysis has been met with many understandable reservations and much thoughtful and sensitive criticism. [1] However, as the story of Nusret Pasha shows, there were cases in the history of at least the late Ottoman Empire where certain decisions cannot be explained simply by referring to the broad political schemes or socio-economic structures of the time, but rather by asking, "Who knew who?".

Even though Cetinsaya's book is a goldmine of information about the history of Iraq in the late Ottoman Empire, it sometimes becomes a little bit difficult to follow all the quarrels and political maneuverings of all the chieftains, notables and bureaucrats. Its findings tie in with recent research about other Arab regions during Abdülhamid's time. In Cetinsaya's own words these are "the considerable role played by local notables in provincial administration, Abdülhamid's reluctance to confront such notables [...], his willingness to delegate lesser administrative functions to the local chieftains and notables, his hesitation to use armed force against powerful tribal chiefs, (and) his efforts to incorporate his Arab subjects into the Ottoman system through education [...]" (151).

Given the book's importance for the study of Iraq's history and its potential to become a standard work of reference, it can only be lamented that it took over ten years until its final publication after it was submitted as a doctoral dissertation in 1994, a phenomenon not so uncommon in Anglo-American academia. Several drawbacks of this aspect can be clearly illustrated by the publication of Cetinsaya's important book.

First, had it been published sooner, it would have been pathbreaking. Now, unfortunately, its primary findings "only" corroborate other research about the late Ottoman Empire that has been published in the meantime. Second, other research about the period would have benefited considerably from the detailed information provided in Cetinsaya's study. Third, much of the detailed material of other studies about Iraq, which have been published since the mid-1990s and would have helped draw an even better picture, could not be included as fully as the author might have wished. Undoubtedly, this would have been too much to ask for from the author, especially in view of the way academic careers usually develop after one's dissertation is complete.

Against this background, it might be worthwhile to query those involved in the production of knowledge, be they supervisors, peer reviewers or publishers, on how the publication procedure might be shortened. Knowledge only starts reaching its purpose once it becomes accessible to others.