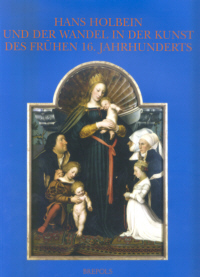 A conference offers a snapshot of the current range of approaches to a problem at a particular moment. This book around Holbein collects papers from the Passavant Colloquium (Frankfurt, 2003), and its subject extends to the crucial role in "early modern" German art. All participants (except for Mark Evans) share a German art historical training; curiously, there is no list of contributors in the volume. Taken as a group portrait, this German conference offers real engagement with the subject of the volume, "der Wandel in der Kunst", often at a local level.

The first one section most fully addresses "Stilwandel und neue Aufgaben." Kurt Löcher discusses the innovations in portraiture "from Bartholomäus Bruyn to Jakob Seisenegger". Bernd Wolfgang Lindemann uses the reliefs of the Daucher workshop in Augsburg itself to consider the function of the new emphasis on relief carving as a medium. Berthold Hinz examines Cranach the Elder in his latter career, after the advent of the Reformation, from the standpoint of his "profane" subjects, particularly the nude Venus. Finally, Jürgen Müller returns to Holbein himself to consider how much of his theory of art can be read out of his images, including his use of the Laoköon from Italian graphics.

Löcher ranges widely for his portrait examples. Like Holbein scholars, he emphasizes the role of the Reformation in advancing this new kind of painting emphasis, reinforced by a new humanist-influenced stress on the individual, with Cranach's Luther portraits as a paragon of both developments. On the whole, however, Löcher's generalizations about the "secular" portrait and bourgeois assertiveness sit uneasily with his stress on the changes in religious culture, clouding the purposes of these new portraits (individual or class/position commemoration?). He suggests that reciprocity of status could develop between a portrait specialist, such as Bruyn in Cologne, and his patrician sitters. He chiefly excludes the courts, where more portraits were produced, if for different purposes, only then to highlight court formulas, such as full-length images.

In considering the replicated religious works of both Adolf and Hans Daucher, Lindemann points to the early growth of art collections, such as the Amerbach-Kabinett, as an impetus to the production of multiple versions of celebrated compositions. This important essay is to be applauded for its attention to copying more than to attributions. Certainly sixteenth-century works emphasized more personal use of imagery, even for religious works like epitaphs. Lindemann emphasizes Rezeptionsgeschichte of objects as they moved into private collections, a move towards a nascent aesthetic appreciation of artistry in the generational shift to Hans Daucher. During the second quarter of the sixteenth century a new self-consciousness of art works in the modern sense, a true Wandel in der Kunst, emerged in Germany.

Later the final essay on Daniel Mauch by Michael Roth provides another case of this development in small-scale sculpture. Mauch's travel from Ulm to Catholic Liege exemplifies another sixteenth-century trait, artistic mobility, including mobility of Mauch's earlier small-scale sculptures. Pertinent to Holbein's Basel is Ulm's response to the Reformation, which culminated in 1530-31 in the elimination of liturgical furnishings and the emigration of the artist for his final decade.

As a complement to Löcher, Michael Evans discusses miniature portraits, the English tradition of "limning" also practiced by Holbein. Evans follows the innovators in France (Fouquet, Jean Clouet) and England (Lucas Horenbout), whose vellum portraits ultimately grew out of late medieval court manuscripts. Evans focuses on the fifteenth century, especially the Burgundian dukes, to show the miniature more as an evolution than a novelty. Besides Holbein, Evans' survey also points to cultural interactions with northern Italy (Clovio), the Netherlands (Simon Bening), as well as Germany (Lucas Cranach).

For Lucas Cranach Berthold Hinz underscores the artist's representations of nude females, whether Eves or, especially, Venuses, as the result of Wittenberg's Saxon court and its humanist university. Themes of Venus and Amor or the Judgment of Paris address the beholder directly, to complicate the clearer morality of the First Parents. Hinz's real contribution is to suggest a distinctive Cranach type (compared to Memling and Bosch prototypes) in the same period, the 1520s, as the other essays; however, Hinz links Cranach's rich thematic range to other shifts in visual culture, even to Wittenberg court collectors, whose accessories adorn the nudes. He minimizes the narrower humanistic program as formative for these images and imagines a public akin to the Nuremberg of Hans Sachs.

Jürgen Müller reconsiders the German dialogue with Italy for Holbein through his use of aemulatio, visual rhetoric of imitatio artis, derived from Quintilian. In the Luther print as Hercules Germanicus, he notes German associations with Hercules and heroism, linked to Tacitus' Germania (a point also made by uncited American scholars on Altdorfer); this satirical woodcut also plays upon the Roman, papal site of its Laoköon source, transformed into a victory image. Müller considers both formal and semantic borrowings, noting how the familiar citation appeals to the educated viewer, chiefly through graphic works, e.g. Holbein's Pictures of Death and Old Testament Imagines. Shared poses of suffering epitomize both motif and content of the exemplum doloris.

In short, these first four essays make a good case for a new era of artistic creativity, ein Wandel in der Kunst, with new media, scale, subjects, and rhetorical practice. In the remainder of the volume, the scholarly contributions remain at a high level but often focus on more limited topics. Local traditions predominate, whether about artists' roles or patrons' roles.

Wolfgang Schmid emphasizes exchanges in all media of arts among Cologne, Nuremberg, and Frankfurt. He focuses on the art market as well as artistic migrations and connections to London and Antwerp as well as Italy. Christof Metzger examines the imperial city of Nördlingen after its magnificent high altar in St. George's by Friedrich Herlin (1462), attending especially to dislocations to artists, especially Schäufelein, imposed by the Reformation. (Schäufelein's documented activity in portraiture and book illustrations, especially for Augsburg publishers but also more widely, accords well with the chapters sketched by other authors.)

Thomas Eser's wide-ranging, important essay focuses on Holbein's heirs, important goldsmiths of complex designs in the later sixteenth century, the era of Jamnitzer, van Vianen, et al. He also speculates on the reasons (other than losses) for their neglect by modern academic art history. Freya Strecker and Helmut Zäh provide a monographic study of a single Burgkmair commission, the Crucifixion Altarpiece (1519, today in Munich), whose patrons, they demonstrate, were the Konrad Peutinger family for their recently completed (1517) cemetery chapel of St. Salvator in Augsburg (destroyed). The Renaissance tomb relief for Cardinal Albrecht of Brandenburg (1525) in Aschaffenburg by Peter Vischer the Younger is investigated by Kerstin Merkel, who situates Kaspar Nützel, a Nuremberg patrician, as the intermediary between the Cardinal and the sculptor. Other sixteenth-century tomb reliefs in the Palatinate, commissioned by the dukes of Pfalz-Simmern, are studied by Stefan Heinz and Wolfgang Schmid.

Finally, Tomasz Torbus discusses the early sixteenth-century Wawel Castle and Sigismund Chapel, the latter one of the purest Italianate ensembles north of the Alps, for the Jagiellonian dynasty in Cracow. This article focuses on the Italian architects (especially Bartholomeo Berecci) of the Wawel, with their local Cracow minority community, to offer a stark reminder of how much the cultural prestige of Italy held sway not only for Holbein but for his period in Northern Europe, especially in a court context like the one fostered in Cracow by King Sigismund I the Old.

The one article that does not fit the Colloquium is by editor Bodo Brinkmann: discussion of a French painting (dated 1537) in the Städel with an exacting perspective view of an open cellar. Identified Dinteville family heraldry locates the work in Auxerre. To this observer, the closest comparisons like with the insistently perspectival narratives of Provencal art, e.g. Josse Lieferinx's Pilgrims at the Tomb of Sebastian (Rome). Brinkmann's hypothesis of a Netherlandish artist active in France might explain the analogy with Lieferinx, an earlier Netherlander in Provence. For content he hypothesizes that this painting formed part of a Labors of the Months sequence, perhaps created in isolation for a sophisticated patron with wine connections.

But Brinkmann's own thoughtful, well-researched contribution also shows how the careful study of individual works must always be the dialectical term in dialogue with grander period pronouncements by art historians. If many of the contributions to the volume are inevitably more focused than wide-ranging, then that is the nature of shorter conference papers. However, it is also clear that the Holbein-Zeit offers a real cultural shift in its art forms and is receiving good attention from a wide range of scholars in the German-speaking discipline.