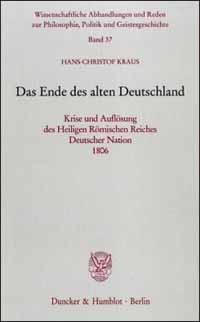 This short book provides an account of the final years of the Holy Roman Empire, an entity that for centuries extended over most of German-speaking Europe, but that finally succumbed to Napoleon. The history of the Holy Roman Empire has been the subject of substantial revisionism in recent decades. Karl Otmar Freiherr von Aretin's two volume Heiliges Römisches Reich 1776-1806, published in 1967 under the auspices of the Institut für Europäische Geschichte in Mainz, was in many respects seminal. There followed more specialised studies that focused particularly on the imperial courts. More recent research has set itself the task of uncovering how the Reich and the order dependent upon it functioned at the local level.

As things stand now, the dismissal of the Reich as a moribund entity whose continued survival stood in Prussia's (and hence Germany's) way is no longer tenable. It is not so much that the recent revisionism argues that the Empire could compete with Europe's other great powers in the military arena, though Georg Schmidt has come close to this position. Rather, historians influenced by the horrors of the twentieth century are unwilling to use military power as the main yardstick of success, as has been the case previously. Instead, they are generally less impatient at the often depressingly slow business of consensus building. They rate 'soft power' more highly than 'hard power'. Hence, their nostalgia for the old Reich.

Kraus's account of the end of the old Empire, in contrast to the more recent literature, adopts the older, essentially negative view. Kraus refers to the recent historiographical revisionism, but only briefly. He lavishes much more space on the short-comings of the Empire, including for example its ridiculous ceremonial. For Kraus, not only was the Reich essentially rotting into decay from at least 1648 onwards; its demise was necessary to allow essential reform in Germany. Indeed, in his concluding sentence (108), Kraus goes so far as to link the Reich's longevity to Germany's disastrous course in the twentieth century.

For the reviewer this is all very unconvincing, for a number of reasons. Admittedly, some of the revisionism on the Holy Roman Empire has gone too far in its portrayal of the Reich as a precursor of the United Nations or European Union. Nonetheless, to write an account of an entity purely in terms of decline, especially if the starting point for the decay is located 158 years before death, produces distortion. This is equally so if one attempts histories of Prussia purely from the perspective of 1945, or of France from 1940, or of Austria from 1918. In Kraus's account, the process of death is so long drawn out that he exhausts the stock of moribund metaphors to describe the various stages, concluding with the 'signature' of the Reich's 'death certificate' on 6 August 1806 (69).

Kraus's account is unconvincing at another level. This is because its focus remains solely on the institutions of the Reich, including especially on the Emperor in Vienna. Not surprisingly, this produces an unappealing picture. The last Holy Roman Emperor, Francis II, was hardly an inspiring figure, though if we adopt power as a measure of success we must concede that he, unlike Napoleon, retained it. Reducing the Reich to Francis II and a few other central institutions ignores the fact that a great deal more was at stake. Kraus writes that the majority of Germans did not see 1806 as a catastrophe, as they would 1918 and 1945 (14). At one level, this is fair enough: the formal termination of the imperial dignity might pre-occupy jurists, but had few tangible consequences as such. Yet if we see the collapse of the Empire in terms of the removal of safeguards preserving a far larger set of entities - guilds, city-states, representative estates, religious communities, church states, sovereign imperial nobles - then Kraus's assertion is untenable. Germans were without a doubt uninterested in the legal intricacies surrounding Francis II's abdication. They were very concerned about the destruction of the plethora of institutions that was inextricably part of the same process. It was those like Hegel, who supported the sovereign territorial state, who were the unrepresentative minority. After all, what did the sovereign territorial state have to offer the ordinary German, apart from higher taxation and military conscription? A sceptical popular attitude towards the state would remain well into the nineteenth century, and would only diminish with the introduction of constitutions that limited the exercise of arbitrary power first made possible by the Empire's collapse.

Kraus's account of the Empire's demise neglects the perspective from below. Instead, the focus is on high politics and international relations. The terrain is familiar enough, though Kraus blunders when he lists Russia amongst the belligerents of the First Coalition (28). He nonetheless adds some interesting details to other events, including Francis II's abdication, and the possibility of Napoleon crowning himself western emperor. The reason that Napoleon did not do this is less because he was the 'son of the Revolution', but rather because of an essentially anti-republican consideration: Napoleon had no interest in binding himself or his government by the kind of contractual relationship inherent in the old imperial dignity.

Overall, Kraus is not reticent in showing that the Reich covered itself in ignominy in these final years. Its response to the kidnap and murder of the Duc d'Enghien in 1804 was especially pathetic. This cannot be disputed. What might be said in mitigation is that other powers in possession of larger armies did little better. Prussia's policy in these years, which moved from self-interested appeasement and culminated in its kamikaze attack on France in 1806, was especially disastrous; it only survived this period of upheaval thanks to the efforts of Russia. Simply because an institution succumbed to the Napoleonic whirlwind does not mean that it was without vitality or useful purpose. Such, one can conclude, applies especially to the old Reich.