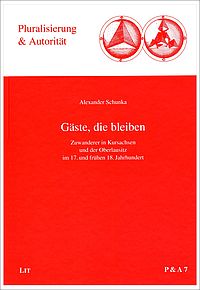 Cohorts of historians, including Richard Schmertosch, Eduard Winter and, more recently, Eva Kowalská, Edita Štěříková and/or Lenka Bobková, have addressed the issues of exile and (forced confessional) migration in early modern Central Europe. Analysing the immigration into seventeenth and eighteenth century Saxony and Upper Lusatia, Alexander Schunka clearly pursued a more ambitious goal: his text considers the problem in its complexity. Well acquainted with recent theoretical debates on Migrationsforschung (Harald Kleinschmidt, Klaus Bade) and armed with an impressive knowledge of the relevant primary sources, Schunka develops, polishes and, perhaps, critically re-assesses some of his arguments, as previously voiced in numerous analytical studies.

Divided into five sections, the book examines a number of interrelated issues, including the intensity, scope and geographical horizon of immigration. It treats of state policy towards new settlers, centripetal forces facilitating integration as well as of centrifugal factors creating 'inner frontiers'. Finally, Schunka is concerned with the social, political and economic strategies adopted by immigrants in a host society whose culture they often found not fully compatible with their own.

Though most newcomers in seventeenth and eighteenth century Saxony were Protestants of various denominations, forced to leave the post-White Mountain Bohemian Lands, Schunka wisely avoids one major trap: that of explaining the migratory flows purely in terms of confession. Though sources referring to confessional mobility abound, the author also briefly investigates economic and private aspects of immigration into early modern Saxony.

Exceeding the limits of conventional approaches towards research on migrations, the book, by investigating the issue in the context of early modern social discourse and political thought, substantially contributes to the ongoing debate about the rise of pre-modern territorial state. The latter was based, in its first phase, upon successful confessionalization and bureaucratization. Particularly revealing is Schunka's insight into disputes over the ius emigrandi as viewed by the chief Lutheran theologians (46-53) as well as his investigation of pragmatic political strategies as adopted by the Saxon authorities during the peace negotiations in the 1640s. 'Squeezed' between political loyalty to the Emperor and religious affinity to (mostly) Bohemian Protestant immigrants, the Elector eventually chose to keep the close alliance with the Habsburgs by turning the blind eye to demands and supplications repeatedly raised by the exile circles (57-69).

In general, the book testifies of large immigration waves into early modern Saxony. At the same time, however, the author's attitude towards the population growth thesis seems at best reserved as data informing us about the scope and intensity of emigration are not available (154). Schunka's own research seems to justify the tentative conclusion that Saxony served as a target country for various groups of migrants but the arguments defending the depopulation thesis are equally strong (see, for instance, studies by Uwe Schirmer).

In my view, demographic and psychological aspects of immigration would nevertheless deserve a more elaborate investigation. Most medieval and early modern urban societies, including urban centers in Saxony, found themselves in a highly schizophrenic situation. There is a prevailing consensus among historians referring to the "natural decrease theory". Historical demographers have suggested that, because of the high mortality rates caused by epidemics, wars, natural catastrophes, and continual problems with hygiene, the natural increase of the urban population was either moderate or nonexistent (see the so-called natural decrease theory). Therefore, it was primarily immigration that either produced the rise or compensated for population losses. Most early modern cities, therefore, desperately needed new town dwellers.

However, the side effects of immigration were grave; namely the legal disintegration of urban space, the growing cultural, social and religious plurality and the weakening of the inner integrity of the urban commune. The emergence of new frontiers made urban authorities everywhere increasingly preoccupied with problems associated with the co-existence of distinct social groups within a limited space. In the seventeenth century this was precisely the case with many urban centres in Saxony in which the Bohemian immigrants found themselves in a fragile state of unaccomplished integration. Although, for various reasons, their full assimilation proved unfeasible, limited economic and social integration proved unavoidable. The unfulfilled integration process might have had fatal consequences as in periods of crisis (epidemics, famine, siege of the city) these segments of the urban population, because of their cultural or religious dissimilarity, usually found themselves subject to hostility from their host societies. Examples are collected by the author abound. A short-lived episode from 1639 testifies to a dormant animosity towards the half-integrated Bohemian community settled in Pirna. In this year, the city was plundered by the Swedes. Shortly afterwards, the Bohemian immigrants were charged with actively assisting this military aggression. The urban sources even classified their behaviour as a violation of the sacred solidarity with the city and the burgher community (161). In this particular case, the immigrants from Bohemia found themselves in a thankless position of "the foreign others".

Comparing the image of the Bohemians in Saxony with that of the English Catholics in northern France or Dutch immigrants in northern Germany (as studied by Heinz Schilling) would perhaps better enlighten the self-perception of early modern urban society as closed and utterly conservative community, suspicious of newcomers who, however, proved indispensable for its survival and continuous existence.

The author investigates the immigration into early modern Saxony mostly in terms of acculturation and integration but the rival concept of transculturation, once introduced by the Cuban historian and social anthropologist Fernando Ortíz, might pose a useful and fruitful alternative. Though originally referring to inter-racial relations in post-colonial America, his concept of reciprocal cultural transfer between minority and majority societies might be well applicable to the Saxon case. One may, for instance, wonder to what degree the (mostly) Bohemian immigrants influenced the host society in terms of culture, economy and language.

All in all, Schunka's enlarged dissertation, now turned into a monograph, is a work of a real significance and I should expect his study to become a central text for students of early modern migrations, political thought, confessional issues and/or urban history.