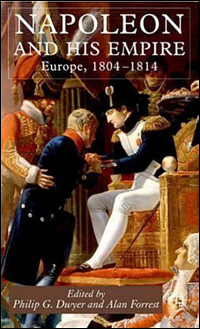 The essays in this book, first presented at a conference held at the University of Verona in 2004, commemorating the two-hundredth anniversary of the proclamation of Napoleon's empire, investigate the institutions of Napoleonic rule and its consequences, generally understanding that rule as a system of domination and exploitation. While some of the authors balance positive and negative features of the emperor's regime, others see it in clearly negative terms. The chief impression left by the essays is that of a government with strong affinities to twentieth century totalitarian regimes.

The book's essays deal with a greater France (the hexagon plus Switzerland and the Low Countries), central Europe and Italy. Spain is not considered, nor is Napoleonic eastern and northern Europe. Ten of the twelve authors come from the far-flung corners of the Anglophone world - Tasmania to Ontario via Greenwich - and two from Germany. There are no eastern European historians in the book, and, somewhat oddly for a conference on the Napoleonic Empire held in Italy, no French or Italian ones.

About half the essays emphasize the most repressive and exploitative features of Napoleonic rule. Katherine Aaslestad's account of the Continental System describes how the economically disastrous affects of the embargo on overseas trade spread from the empire's port cities inland, bringing recession and impoverishment in their wake, creating a massive discontent with imperial rule, which played a major role in bringing down the entire system, once it encountered military defeat. Malcolm Cook's piece on Napoleon's plebiscites brings out the intimidation of voters, falsification of results and rapidly declining turnout that lay behind the enormous majorities the regime interpreted as overwhelming public support. Michael Sibalis's essay on political prisoners describes the six hundred or so individuals, real and imagined enemies of the regime, who were subject to arrest and detention for indefinite periods without trial or any form of judicial proceeding. Similarities with more recent totalitarian practice - although not explicitly noted by the authors - are hard to miss.

Howard Brown's essay on special tribunals and security procedures deals with Napoleonic internal counter-insurgency. After seizing power in 1799, the new First Consul, resolved to end the disorder, brigandage and chronic hostility to the regime prevalent under the Directory. Flying columns of soldiers and special tribunals were effective instruments of repression. Brown finds that about 2,500 individuals were executed in the first two years of Napoleon's rule, five times the yearly figures of the late old regime, a level of repression not seen since the Reign of Terror. The executions were particularly brutal public spectacles. The femme Brunet, a shopkeeper in the village of L'Isle in southern France, was condemned for receiving stolen goods from brigands and executed by firing squad in the village square. "She was nursing; milk and blood flowed from her corpse. All of L'Isle closed its doors and moaning was heard throughout the town." (82)

Michael Rowe's chapter on the Napoleonic contribution to Germany's economic modernization offers a more explicitly negative evaluation. Rowe argues that the efficient Napoleonic bureaucracy strangled economic growth in western Germany, which had been underway during the old regime. He also suggests that the Prussian agrarian reforms, favorable to economically efficient large landowners were better for agriculture than the promotion of smallholders by the Napoleonic Code. Not everyone would agree with the author's skepticism about state policies to encourage economic growth or his disdain for the capabilities of peasant farmers. The fact that both per capita income and agricultural productivity were much higher in Germany's western regions than its eastern ones throughout the entire nineteenth century at least raises questions about Rowe's interpretations.

Diverging from the picture of a state apparatus acting - usually malignantly - on society are the essays by Gavin Daly on the prefects, John Dunne on local elites, and Alexander Grab and John Davis on Napoleonic rule in Italy. All of these essays investigate the interplay between the regime's bureaucracy and the notables, considering whether the government could function without the cooperation of these locally most influential men. The authors have different opinions about the actual influence of the notables (to say nothing of the social composition of this group in different regions), but their insightful and stimulating essays all point to the need for additional research on the actual functioning of Napoleonic rule, for which evidence is abundant in archives across Europe. These essays also offer the possibility of comparison with twentieth century totalitarian regimes, since the extent to which such regimes were dependent on a degree of popular consent and cooperation has been an important theme of recent scholarship.

The essays of the two German authors differ from those of the other contributors by emphasizing elements of continuity from the old regime. Ute Planert summarizes her recent book on Napoleonic regimes in southern Germany, asserting that the Napoleonic period was not the seedbed of German nationalism in the south. Rather, she argues, attitudes toward Napoleon followed the lines of old regime loyalties and conflicts. For the bulk of the population the entire period, from the outbreak of the wars of the French Revolution to the famines of 1816-17 was one long era of politically undifferentiated adversity. Andreas Fahrmeir's very subtle essay on Napoleonic citizenship law argues that its conferral of French citizenship on anyone born in the country was not an example of a west European ius soli, contrasting with a central European ius nascendi, but did reflect the establishment of a unitary citizenship, characterized by individuals' direct relationship to the central state, while in central Europe citizenship was multiple, including relations to a municipality (Gemeindebürgerrecht) and to a state (Staatsbürgerrecht). However, these differences, Fahrmeir points out, pre-dated the French Revolution.

The emphasis in many of this book's essays on the repressive and violent nature of the Napoleonic regime, and the images evoked of twentieth century totalitarianism are reminiscent of scholarly judgments during the bicentenary of the French Revolution. In contrast to twentieth century dictatorships, though, Napoleon's worked with quite primitive technology. After reading this book, one has to wonder if a Napoleonic empire, ruling a large territory and substantial population with an elaborate bureaucratic apparatus, was a long-term viable enterprise, in view of the primitive conditions of transportation and communication. There were states at the beginning of the nineteenth century that encompassed large areas - the Russian, Chinese and Ottoman Empires or the United States come to mind - but they were all loosely administered, lacking the well-staffed government ministries, the prefects with their multiple tasks of law enforcement, economic policy-making, gathering statistical data or engaging in political surveillance, and their incessant correspondence with the central administration, or the armies of gendarmes, tax collectors and customs agents of Napoleon's regime. For all the violence, repression and domination of Napoleon's empire, it may have been undertaking a task beyond its physical capabilities.