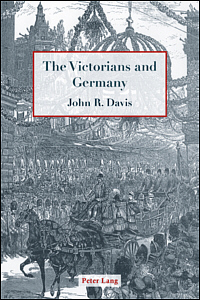 It has long been recognised that British interest in Germany in the nineteenth century was substantial and significant, and many detailed studies have appeared on aspects of it. It is striking, however, that a very few books have attempted to give a general introductory account of it for the non-expert reader. This is the gap that John R. Davis has sought to fill in this full and useful account.

Its main achievement is to offer a clear explanation of some quite complex intellectual developments and to trace some of the connections between them. The strongest chapters are the earliest. The first considers the late eighteenth-century German reaction against classicism and the increasing emphasis on Geist and the individual's inner life in the hope of understanding processes of social change and God's intentions for the world. The second discusses the way in which these ideas affected some important practitioners of English literature and the third does the same for English theology. In all these chapters the student will find some helpful generalisations and linkages. There follows a chapter on attitudes to the writing of history and philology and one on art, aesthetics and music, both of which cover a good deal of ground competently in similar vein.

The last three chapters, on education, travel and the German polity, are more diffuse and less satisfactory. This is because they have a more difficult task in two respects. First, John R. Davis makes a more concerted attempt in them to consider the period after the 1860s, whereas the early chapters have a thematic unity stemming from their focus on 1825-65. Second, they require more consideration of wider swathes of British opinion, and the practical impact of German ideas in Britain, whereas the first half of the book is really only concerned with small networks of cultured Germanophiles. In other words, the book is less successful when it tries to live up to its title. The definitive book on the Victorians and Germany has not yet been written, and perhaps never can be written.

In the first half of the book, a strong case is made for the receptiveness of important clusters of early Victorians to German ideas about man's spiritual needs in the modern world, and their impact on conventional assumptions about the bible, history, art and scholarship. Most, but not all, of the examples will be familiar (Coleridge, Carlyle, Arnold, Eliot, Lewes and so on) but the discussion is comprehensive and shows the zeal with which German thinking was used to attack perceived British philistinism and materialism. The main point is well made, that this was a multi-faceted intellectual trend which had considerable attractions in Britain in the forty years after 1825. "Germany had sought to liberate herself from Enlightenment rationalism in the eighteenth century, and this experience produced ideas and developments particularly attractive in Britain in the nineteenth century" (388).

A minor problem with these chapters arises from the amount of material that has to be covered. Many of the discussions of individuals are blunted and the overall approach more list-like than fluent. Moreover the book is written almost entirely from modern secondary sources and so coverage reflects emphases in the existing literature. Thus, for example, there is much more on Max Müller than on Bunsen, despite the latter's importance, and considerably more coverage of Unitarian theological interest in Germany than of evangelical Dissenters' engagement with German Lutheranism, which scholars have neglected. A lot of writing on some significant individuals, like Seeley, appears not to have been absorbed. The general effect is to summarise the conventional position rather than to force us to reassess the Anglo-German cultural relationship.

John R. Davis's case for German cultural influence in Britain depends on lumping together all who seemed open to German argument. Yet those who read German could pick and choose from a great variety of theological and philosophical texts, many of them conservative. Only fiercely chauvinist opponents were likely to group Arnoldian Broad Churchmen together with heterodox transcendentalists under the Germanist umbrella. Many liberal Anglicans had only the sketchiest understanding of German "rationalism" anyway. "Germanism" was often a stick used by the intellectually unadventurous Anglican Establishment to beat its opponents, indiscriminately. Moreover, John R. Davis does not have the space to give adequate attention to these critics, and the result is to give an exaggerated sense of the impact of "Germanism". The controversy over the mild heterodoxy of Essays and Reviews, like the confident clerical response to Darwin's Origin of Species, shows how culturally powerful the forces of conservatism still were at the beginning of the 1860s.

The bias against these critics is starkest in the chapter on education reform, which sets out at length various expressions of admiration for German educational institutions through the nineteenth century without giving serious weight to all the forces that were pulling in the other direction and repeatedly frustrating such plans. Any reader of this chapter might be forgiven for developing considerable scepticism about the practical extent of German influence on nineteenth-century Britain. It also too readily assumes that changes in policy were connected to a warming of sentiment towards German practices. However it could just as easily be argued that that sentiment remained ambivalent, while policy changes were driven by more domestic assumptions about the power of the state, about the poor and about the religious problem.

At one point in the conclusion, John R. Davis recognises the great truth that "the discussion of Germany often bore little relation to evidence on the ground, and was also implicitly a discussion about Britain, where Germany was a motif or a theme, hardly based in fact" (384). Unfortunately the book hardly develops the idea that the British were mostly concerned with themselves. British cultural discussion should be seen as an essentially internal argument in which examples from other countries played a limited but sometimes telling role. None of the British arguments about Germany are adequately contextualised either chronologically or by reference to contemporary problems in British life. For example, little attention is paid to the difference of climate between the early 1850s, the high point of British arrogance about national superiority, and the mid-1860s, when there was more receptiveness to other countries' practices and customs. Germanophiles like Matthew Arnold or George Eliot who had a high national profile in these years had been counter-cultural figures fifteen years previously. Even so, a lot of the expressed respect for Germany in the mid-1860s was ambiguous or superficial, seeking an arresting way of scoring a point against complacent orthodox Churchmen or parliamentarians who seemed unwilling to embrace institutional reform.

Similarly, though the chapter on Victorian travel to Germany contains some attractive material, it would have helped to set the discussion of travellers' attachment to the area in the context of the extensive scholarship by John Pemble, James Buzard, Maura O'Connor, Piers Brendon and others about Victorian travel elsewhere on the continent. How far were tourists attracted to Germany by anything specifically German? Did they have any more engagement with local culture, any more interest in the present (as opposed to Romantic historical stereotypes), and any more willingness to escape an insular "Little Englander" lifestyle in their spa towns, than those who visited other places? If not, how deeply rooted was a distinctive Germanophilia in the British travelling classes?

The final chapter, which attempts too much in trying to generalise about attitudes to the German polity both before and after 1870, and to cover some cultural trends after 1870, has the merit of showing even more conclusively than the other material that there was no such thing as a dominant Victorian idea of Germany.

This book is best seen as a clear-headed introduction to German Romantic thinking and to those British cultural figures who were most influenced by the various strands of it. It is a good starting-point for the more complex journey that anyone must undertake who wants to understand the richness of the interchange between an economically powerful, politically self-confident and culturally conservative country and a rigorous, creative and potentially disturbing intelligentsia across the North Sea, with which it arguably never fully came to terms.