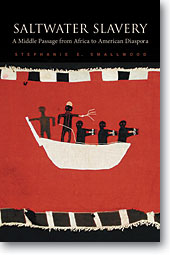 Saltwater Slavery succeeds in its primary objective of bringing "the people aboard slave ships to life as subjects in American social history" (3). Stephanie Smallwood makes judicious use of the private correspondence between officials in London and agents in Africa and the Americas, linking it carefully to secondary literature on the Gold Coast, the Atlantic slave trade, and slavery in the Americas (mostly British America). The result is an almost archaeological excavation, which turns over familiar passages and seemingly innocuous lines in the documentary record of the slave trade, in such volume and with such precision as to generate a genuine sense of the human story of transatlantic enslavement. Smallwood sensitively and intimately dusts down the salient waypoints for slaves, carefully separating experiences that are often bundled together: capture, imprisonment, embarkation, shipboard passage, disembarkation, sale, and slavery in the Americas.

The first part of the book begins with a succinct description of the social, economic, and cultural terrain of the Gold Coast, which quickly developed from a Sudanese periphery to a more heavily populated, diverse centre of Atlantic interaction, feeding off Portuguese exchanges (including slaves) in return for upland gold. With the proliferation of New World colonies in the seventeenth century, the region, as a prime site for uploading cargos of slaves for transatlantic shipment, became a target for multiple nations, and especially the English. The resultant patterns of trading and shipping routes, dominated by the distinctive European coastal forts, were the institutional and geographic structures that framed a new model of enslavement, a model which provided African states such as Akwamu and the Asante with "an expedient means for managing the human by-product" of their militaristic expansionism (23).

The victims increasingly faced something more than captivity: the prospect of saltwater slavery, an absolute exclusion from any social community. Throughout the book, Smallwood stresses Africans' varied responses to their attempted commodification, and slave traders' "thoroughly scientific" (43) development of institutions, methods, and sites of incarceration to carry out this commodification more efficiently and effectively.

One of the reasons that Saltwater Slavery works so well is that it seeks not to encompass the whole length and breadth of slave-trading time and space that is oversimplified in the phrase "Middle Passage" but specifically tackles the "modest tributary" (3) of the Gold Coast, in the half-century after 1675 when European records (thanks largely to the Royal African Company) and colonial demand were both in full flow. Smallwood challenges the phrase "Middle Passage" in other ways too, convincingly demonstrating its unsuitability for capturing the lived experiences of enslaved Africans. Saltwater slaves had little sense of beginnings and ends, but an ongoing exposure to suffocating traumas, both physical and psychological, that made even their social death "something horrifyingly different" (60) in its completeness and irreversibility.

Saltwater Slavery tries hard to capture the fullest possible understanding of how transatlantic exile reconfigured lives - refreshingly concentrating on the "before" as well as the "after". For instance, rather than relying solely on the ethno-linguistic categorisations of slave traders or American buyers, or the socio-political landscape of West Africa as described in early European maps, we are presented with indigenous stories of origin and evolving notions of community (kinship and kingship) as found in African archaeological literature and oral traditions. Such sources do not typically lend themselves to secure generalisations, of course, but as anthropologists and ethnographers have shown for comparable populations elsewhere in the early modern Atlantic world, they allow for a more nuanced understanding, particularly of cultural exchanges. Equally welcome in the central section of Smallwood's study is her treatment of the transformative intimacies of the tortuous transatlantic journey, including her engagement with African epistemologies and cosmographies (especially mourning practices).

In the final two chapters, Smallwood turns from African markets and shipboard experiences to address the complex questions surrounding dispersal, acculturation, creolisation, and the diasporic identity of Africans and their descendants in the Americas. Here again, she offers a sobering counterpoint to earlier works that emphasised the redemptive power of community formation or slave agency: Smallwood's slaves proceeded "involuntarily, propelled always by agendas and agents other than themselves" (8) in constellations that were the antithesis of communities. Their dislocation was all the greater because of their exile from a home culture that bound every person integrally to an extended family (especially among Akan-speaking groups).

After the theatrical marketing event of the slave auctions, in which Gold Coast Africans were highly rated, they were re-parcelled into new configurations. From that moment, Smallwood argues that commodified Africans had to begin to reconstruct personhood and fight for social integration in order to become "immigrants" - though her outline of a strangely simplistic three-step process by which they did so (orientation, community-formation, and memorialisation) is surely open to question, and needs further empirical support and better calibration across time, space, and gender.

In the aftermath of sometimes over-congratulatory bicentennials of the abolition of the slave trade, this sobering book presents an important and welcome reorientation for the field. It is a work that tempers historiographical synthesis with a fresh and thought-provoking approach, and whose basic premise is powerful: the human commodities at the commercial heart of the early modern Atlantic world, the people whose labour linked its outposts into a profitable multidirectional European market nexus, had themselves a relentlessly linear and terrorising experience. Even as new communities haltingly formed in the Americas, the arrival of new shiploads continuously traumatised their collective memory and their creolised identities.

All works in such sparse terrain are vulnerable to challenge because they must deploy evidence elastically and speculatively. There are moments where Smallwood perhaps overstates the case for commodification, where quantitative data might have been used more effectively (for instance, in the questionable worth of the ratios of exports to imports in Table 1.1), and where her canvas is overstretched (e.g. the Angolan fugitives described on page 184 who actually fall outside her time period, and are on the loose in Georgia not South Carolina). But this is nitpicking in a field where definitive answers are impossible, and should not detract from the fact that Saltwater Slavery gives shape to the experience of voiceless thousands in a manner that might yield similar insights elsewhere. Canny African merchants, rusting shackles, suicides, interminable delays on the Atlantic littoral, the political economy of crowding bodies belowdecks: this is absorbing social history of high quality and high impact, as evidenced in its being awarded the Frederick Douglass Book Prize for 2008. It can be read profitably in conjunction with Marcus Rediker's The Slave Ship (2007), both offering accessible and novel qualitative histories that help flesh out, and arguably set in motion, the well-trodden quantitative pathways of the Atlantic slave trade.