Aysel Yıldız: Crisis and Rebellion in the Ottoman Empire. The Downfall of a Sultan in the Age of Revolution, London / New York: I.B.Tauris 2017

Fawzi Habashi: Prisoner of All Generations. My Life in the Homeland. Translated by Jano Charbel, Berlin: Klaus Schwarz-Verlag 2011 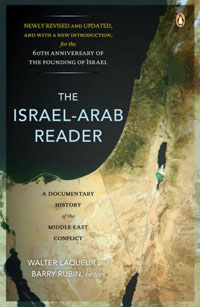 Generations of students grew up with the Israel-Arab Reader since the historian Walter Laqueur edited it for the first time two years after the 1967 Arab-Israeli War. Three editions and almost two decades later it became a joint venture with the historian Barry Rubin. In print for forty years now, it is one of the most successful documentaries on the Middle East conflict. This edition is devoted to the 60th anniversary of Israel's founding.

After the Cold War, as the Penguin edition of 1991 appeared in America, some Middle East historians believed this could be the last edition because the conflict seemed to end. Obviously, this euphoria led to mistakes in search for peace. We can only see in hindsight what went wrong in that "spring decade" after the Madrid Peace Conference, the Oslo Agreements and former President Bill Clinton's last rescue efforts of early January 2001.

Here comes the importance of this book: we can study the past properly with the help of a synoptically approach based on documents of all sides. Involved are five states in the Middle East, Israel and its immediate neighbors. Although the role of other lands like Turkey, Saudi Arabia, Iran and Iraq are important as well. Also we need to take into account two other organizations, the Arab League and the P.L.O. Of the out-of-region actors the Americans, Russians, Europeans and United Nations proved to be influential.

All this changed after the millennium with a phase of intense confrontations that began with the Islamic terror attacks in Israel, in the United States and other parts of the world. In this bloody phase, some non-state organizations became key players at Israel's borders, like Harakat al-Muqawama al-Islamiyya, Hamas, and Hizb Allah, the Party Of God. For a fresh approach, this edition provides a balanced mixture of sources from 1882 to 2007.

There are various national collections of documents in which the "Foreign Relations of the United States" is with regard to the Middle East conflict certainly the foremost one. Large parts of this FRUS series after World War II is available online, from the Truman to the Ford administration.[1] In the Middle East, only Israel provides a similar advanced foreign policy series. The "Documents on The Foreign Policy of Israel," ISA, and the "Yearbook of Official Documents" by the Foreign Ministry started in 1975 and 1986. But they are not available online and well behind the common 30-year-rule to archival access.

Useful is also Bernard Lewis' fine resource collection "A Middle East Mosaic" (Random 2000) and specialized works such as Martin Gilbert's "Atlas of the Arab-Israeli Conflict" (Routledge 2008) which is in itself also a unique venture since 1974 in its ninth edition. Other reference books found no new edition like Dilip Hiro's "Dictionary of the Middle East" (St. Martin's Press 1996). Meanwhile there are also specialized readers like "The Middle East and Islamic World Reader" by Marvin Gettleman and Stuart Schaar (Grove Press 2003) and "The Al Qaeda Reader" by Raymond Ibrahim (Doubleday 2007). By contrast, this excellent Israel-Arab Reader deals with basics of the Middle East conflict.

If we compare with the previous edition, obviously no older text was excised. Some new documents were added, including papers of: the coalition agreement between the now split Palestinian factions Fatah and Hamas of March 2007; former President George W. Bush's last rescue efforts at the Annapolis Conference in late November 2007 (those presidents try often to set Middle Eastern clocks according to their fast ticking watches in Washington DC). Among striking additions in this reader are the Arab League Summit's "Beirut Declaration" of early 2002, the speech by Iran's President Mahmud Ahmadinejad at the conference "World without Zionism" of late 2005; and the United Nations Security Council's ceasefire resolution of August 2006. The latter contains points against the sales or supply of arms to individuals or entities in Lebanon which were clearly violated.

In a larger perspective I found four documents that might be regarded as candidates for an entry into this collection. I shall name them briefly. First, a report by the American consul in Jerusalem. Selah Merrill used in 1899 for the first time "Jewish Question" [2] in Palestine with regard to the support by the American Zionist movement for Jewish "tourists en mass," to Ottoman restrictions and to unruly Jewish immigrants from Russia.

Second, a text written in 1907 by the New York Federation of American Zionists. Under the headline "Zionism: A Jewish Statement to The Christian World" it begins: "Zionism strives to obtain for the Jewish people a legally secured, publicly recognized home in Palestine. Zionism is the solution of the Jewish question proposed by Jews." The authors stress that half of the Jewry lives in Russia and Poland. They are "restricted and harassed by exceptional laws, and their opportunities are severely limited." And they ask: "With whom is the Jew of Eastern Europe to assimilate, if he is to assimilate at all?" They saw an assimilation as "impracticable" and suggested a life by colonizing lands in Palestine.

Third, a message given by the Ottoman Grand Vezir Talat Pasha to Jewish delegates in 1918. In his text, which can be dubbed as the "Young Turk's Balfour Declaration," he said that the Council of Ministers in Istanbul had decided to lift all restrictions for the Jewish emigration to and colonization of Palestine. The ministers would regard a religious and national center of the Jewish nation in Palestine with sympathy and treat Jews completely as equals to others. They gave orders to the administration to secure their good treatment.

Fourth, the Grand Mufti of Palestine reacted to the Peel Commission Report of July 1937. His "Appeal to the Islamic World" was a vicious attack against Jews. Amin al-Husaini asked Muslims to rid their lands from them. It was already a combination of religious and racist hatred of Jews. He underscored there a formal rejectionist tradition that goes on until today. He meant no to a Jewish state and no to contacts with Jews as "regional outlaws."

Well, from this vantage point, the Middle East changed slightly to the better since 1948 which is documented uniquely in this anniversary edition.