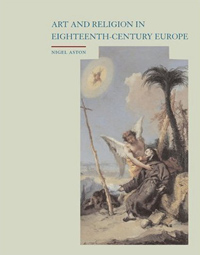 Religious art in ancien régime Europe, especially images intended for non-Catholic sacred sites, is a relatively understudied area of the visual culture of the ancien régime. Nigel Aston's book is a highly ambitious attempt to synthesize a vast body of material into a coherent narrative that seeks to reposition religious images at the apex of eighteenth-century artistic production. Like all such undertakings, the author has relied almost exclusively on secondary sources. While illuminating many of the "dark corners" of art history, such as monastic art in Hungary and Lutheran imagery in Sweden, the consistent privileging of the artistic periphery occurs at the expense of the center-Rome.

The introduction acknowledges the problems this approach presents to many art historians, myself included, and the author's attempt to engage interdisciplinarity in a sophisticated and sustained way merits praise. This book is an important contribution to scholarly understanding of religious art in the eighteenth century, and many of the little-known images discussed will doubtless inspire other scholars to seek additional knowledge of them. Still, there are a number of issues that need to be addressed in any assessment of this valuable text.

Nigel Aston's book is divided into eleven chapters that are bracketed by brief introductory and concluding remarks. The range is impressive and includes such diverse topics as the impact of Jansenism on the production of religious imagery in Catholic countries, funerary art in Christian settings, Christian art in public settings such as churches, palaces and state buildings, the market for religious imagery and its role in ephemeral festivals, and many other important topics.

The ordering of the chapters leaves a bit to be desired. While the first two chapters, "The Reformation and Counter-Reformation inheritance, c. 1520-1700" and "Art and the Religious Culture of Europe" are logical places to begin and "Revolution and Religious Art", the final chapter, is a reasonable place to end, the middle chapters have no discernible logic. Why, for example, is "Religious Buildings and their Contents" placed as chapter seven, while "The Churches and Religious Art", which considers altarpieces and other objects encountered in sacred settings, discussed in chapter four? There may have been a reason for the arrangement of the chapters, but it is not at all evident to the reader.

The book's primary strength is its insistence on the fundamental importance of religious imagery to eighteenth-century visual culture, and that religion in general should be repositioned as a crucial factor in any evaluation of the history of the era. Nigel Aston writes: "[...] religion remains fundamental to any accurate understanding of eighteenth-century European societies [...] artworks produced within and for its varied religious culture are central to validating the underlying presumption of religiosity." (10) Both contemporary accounts and a mass of artistic evidence are cited to support the author's thesis. His notion that art historians have neglected religious art in their narratives of the development of the century's visual culture, however, is overstated. Although the rise of the so-called lesser genres - landscape, still-life, portraiture and genre painting - had a profound impact on art patronage and the market, no serious survey of the art of the ancien régime does not include considerable discussion of religious imagery, accompanied by numerous illustrations.

There is a disciplinary difference in play here. Art historians tend to look at artistic production primarily through the lens of the oeuvre of individual artists. There were relatively few painters (and even fewer sculptors) who worked exclusively in the genre of religious art, and sacred imagery was only a part of their overall production. This was especially true of artists in the major artistic centers of Western Europe, especially Rome, Naples, Paris, Venice, and London. This practice is illustrated in the display strategies of private collectors, where sacred subjects hung cheek by jowl with erotic mythologies, peasant festivals, kitchen still lifes and other subjects. Although it is important to examine the separate genres synthetically, one must not lose sight of the professional practices of artists and the wishes of patrons to demonstrate their good taste by the quality and inclusiveness of their collections.

Generally speaking, the discussion of religious imagery in Protestant contexts, especially in Great Britain, is more persuasive than many of the characterizations of Roman Catholic art. The author's emphasis on the profound impact of Jansenism on Catholic images is a case in point. Differences between Jansenist thinking in France and Italy go unremarked, and the French version is presented as definitive. In a section of chapter nine titled "Jansenism and other challenges to popular sacred art" (244-248), Jansenist distaste for many forms of popular imagery is given credit for Enlightened Catholicism's attempts to rein in "superstitious" cult images and other objects that cast the faith in a bad light, particularly to skeptics, Protestants and the learned. In fact, the critiques of such popular images by Ludovico Antonio Muratori, Benedict XIV, Scipione Maffei, Giovanni Bottari and Cardinal Domenico Passionei, among many others in Italy, were much more important to official ecclesiastical censures of such images. None of these figures could be characterized as Jansenist in the French sense. Indeed, the Synod of Pistoia and Bishop Scipione de' Ricci's "Jansenism" was largely of Italian, not French inspiration. By the late 1780s, Jansenism in France was virtually a dead letter, at least in ecclesiastical terms.

The issue of Catholic Enlightenment, mentioned many times in Nigel Aston's text, brings up my chief problem with this well-researched and provocative book. If one may judge by the images the author presents, it seems that very little religious art and architecture was being produced in eighteenth-century Rome, Naples and Florence. Of the book's 110 illustrations, forty-seven are British, nineteen French, twelve Venetian (seven by Giambattista Tiepolo alone) and only one is Roman. A handful of central and south Italian works are mentioned in passing, but not illustrated. As the center of universal Catholicism and the seat of the Papacy, this strikes me as fatally unbalanced. Many of the themes discussed by the author, including the movement against miracles and the continuing "vitality and confidence" of the eighteenth-century religious orders would have been considerably strengthened by recourse to images produced in Rome. Canonization pictures executed for Clement XII, Benedict XIV and Clement XIII certainly engage the question of the miraculous in enlightened Catholic thinking, while the truly impressive series of colossal statues of the founders of the religious orders executed for Saint Peter's (not to mention the many new papal-sanctioned orders of the eighteenth century) attest to the continuing cultural ambitions of the orders. In sum, the neglect of Rome and Naples seriously undermines its ability to speak authoritatively about Catholic imagery produced during the ancien régime.

This book is a praiseworthy attempt to reposition religious art at the epicenter of European art and reception during the decades leading up to the French Revolution. Its rejection of older scholarly models of the marginalization of religion and its images in the European imaginary and the purported secularization of society is spot on and indisputable. The text is also a major contribution to scholarly understanding of Protestant religious art. While any assessment of Roman Catholic religious art that largely excludes the decisive Roman and Neapolitan role in the development of sacred imagery is problematic, Art and Religion in Eighteenth-Century Europe is still a highly important contribution to our knowledge of the role of religion and its imagery in European culture from 1700 to 1800.