Mark Häberlein: The Practice of Pluralism 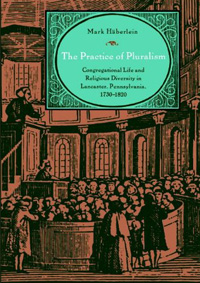 In his book, The Practice of Pluralism: Congregational Life and Religious Diversity in Lancaster, Pennsylvania, 1730-1820, Mark Häberlein paints a vivid and vibrant picture of religious life in colonial and early national Lancaster, Pennsylvania. Lancaster was one of the largest non-coastal towns in eighteenth-century North America. Its population grew from 2,800 people in 1700 to 4,000 at the end of the century. Lancaster was a "commercial hub" that connected the Philadelphia metropolis to the Pennsylvania backcountry (1). The Practice of Pluralism is an excellent local study that simultaneously celebrates and critically examines the nature of religious pluralism and the extent to which colonial and early national Americans allowed religious differences to influence community stability.

"Community", in the context of Lancaster, was an expansive concept. Häberlein distinguishes his work from community studies of New England and Southern towns characterized by ethnic homogeneity and religious conformity. Lancaster was remarkable for its ethnic and religious diversity. Its citizens were a mix of German and English and they worshipped according Lutheran, German Reformed, Moravian, Anglican, Presbyterian, Quaker, Jewish, and Catholic faiths. Häberlein notes that while Anabaptists, Mennonites, Amish, and Sabbatarians had a significant presence in the countryside around Lancaster, they did not form congregations within the city.

Häberlein resists focusing on a single religious or ethnic group in an "Atlantic" context by tracing its migration from Europe and its settlement in America. Instead, he considers all of the denominations in Lancaster together, assessing the "nature of religious pluralism". He takes a twofold approach: "comparison", and "the study of interactions" (11). Comparing the communities, he discovers that while they all had distinct characteristics, their experiences were remarkably similar: they were all searching for stability. By studying interactions, he can shed light on the ways in which people in colonial Lancaster understood their differences.

Formulating a detailed reconstruction of the various congregation's memberships and histories, Häberlein discovers that church adherence in Lancaster was based on ethnic lines. The English settlers were members of the Anglican, Presbyterian, and Quaker churches. German settlers worshipped in the Reformed, Lutheran, and Moravian Churches. The small Jewish population was largely Ashkenazi. While members of the Anglican Church held most of the highest political offices in the city, social class, or income level, did not impact church membership among Germans. The social composition of the German Reformed and Lutheran churches, and even the smaller Moravian church, was virtually similar. Wealthy Germans were just as likely to belong to the Reformed church as the Lutheran church.

Examining interactions, Häberlein discovers that relationships among the denominations were largely civil, but there was little direct interaction among the groups. Unlike in metropolises like New York and Philadelphia, few wealthy Germans joined the Anglican Church for the prestige and opportunity it provided. Intermarriage was rare, even among German Reformed and Lutherans congregants. One of Häberlein's most surprising discoveries is that German and English Protestants alike coexisted peacefully with Jews and Catholics. Häberlein indicates that German settlers would have had more experience interacting with Jews in Germany, than with English Anglicans, for example, and there would have been no natural alliance among English and German Protestants against German Jews. Even as inflammatory anti-Catholic literature proliferated Philadelphia at mid-century, citizens of Lancaster were more concerned with order and stability in their diverse surroundings than fanning polemical flames.

The biggest conflicts occurred within denominations rather than among them. Regional traditions and variations between co-religionists often led to quarrels in congregations. For example, Häberlein relates a story of interdenominational conflict within the Lutheran church in the 1750s. Several members of the congregation resented and rejected their minister for his severity and strict discipline, verging on deranged fanaticism. Lancaster's largest Lutheran population originated from the Duchy of Württemberg in southwest Germany, but it also consisted of significant numbers from Palatine, Hessian, Hallensian, and Franconian territories in the north and east of Germany. The unpopular minister came from Halle, while most of his critics were from Württemberg. Häberlein proposes the activistic, missionizing pietism practiced by north and east German Lutherans assaulted the independence and the commitment to lay leadership of the Württemberg Lutherans. Regional diversity, even within ethnically homogenous churches, provided fodder for misunderstandings and violently opposing views of church government and organization. Conflicts, dissent, and scandal proliferated congregations in Lancaster in the eighteenth century, even as relationships remained peaceful among them.

Häberlein prudently refrains from projecting his findings too broadly. He is very careful to acknowledge that the populations, patterns of settlement, and personalities he describes are unique to Lancaster, and cannot be extrapolated. Nevertheless, within the very specific context of Lancaster, Häberlein succeeds in making innovative and compelling observations that have further implications for the study of the principles and practice of religious toleration and religious pluralism more generally, particularly, his findings about lay participation, and his conception of the practical nature of pluralism.

One of the greatest strengths of The Practice of Pluralism is Häberlein's meticulous archival research allowing him to investigate lay and popular participation in religious life. Looking at tax lists, deed books, wills, estate inventories, and newspaper ads Häberlein argues that the absence of qualified ministers did not signal a lack of interest or participation in organized religion. Residents of Lancaster formed worship communities without the prompting or goading of clergymen. They built meetinghouses before they had ministers to carry out the services. In fact, in many cases Lancaster residents insisted on the authority of the laity over the authority of the clergy in matters of worship and government. Laymen in Lancaster demanded the right to choose and approve of their ministers, oversee funds, to discipline, and to shape their worship. Clashes between the clergy and the laity over questions of authority within churches were continuous obstacles to the stability of the community, but also kept religious life vibrant and competitive. Häberlein's work calls into question the premise that a shortage of ministers in the colonies discouraged popular participation in religion.

Finally, Häberlein proposes an intriguing way to conceptualize pluralism in colonial and early national U.S. history. His title is telling. Pluralism was a practice more than a liberal or an Enlightenment principle. Residents of Lancaster peacefully coexisted not through any high-minded commitment to toleration, but rather out of expediency. Häberlein's work compellingly suggests that pluralism was not an end in itself and he subtly critiques pluralism as a positive value. One reason why Lancaster congregations so successfully managed inter-group conflict was because they avoided head-to-head confrontations. Congregations practiced a sort of benign neglect towards their competitors. They formed congregational islands reinforced by marriage patterns. However, conflict was rife within these isolated sub communities. Each congregation experienced its own angst as members with different regional traditions and different commitments to authority, discipline, and government vied for influence. Conflict exited where there was interaction, and congregations spent decades overcoming their internal divisions.

Viewing pluralism as an active practice of coexistence on the local level, and revealing, through meticulous archival work, that lay participation was the driving force behind the turbulent and vibrant religious life in Lancaster, The Practice of Pluralism makes an important contribution to our understanding the early history of Pennsylvania, as well as the complex and often contradictory nature of religious diversity more generally.