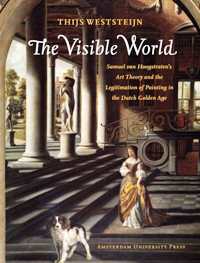 Art historians, in examining the literary sources on art of the Dutch 17th century, have been vexed by the scarcity of art writing by Dutch artists and critics during this time. Framed by Carel van Mander (1604) and Arnold Houbraken (1718), the authors who wrote treatises on the visual arts are few: Isaac de Ville (1618), Franciscus Junius (1641), Philips Angel (1642), Willem Goeree (1668 h-1882), Samuel van Hoogstraten (1678), and Gerard de Lairesse (1707). Joachim von Sandrart (1675) continued in the tradition of Vasari and Van Mander, writing about art from antiquity and the Renaissance on, including major chapters on the Dutch. Samuel van Hoogstraten's position within this roster is crucial, not only for his erudition but also for his international travels and contacts. His Inleyding tot de Hooghe Schoole der Schilderkonst: anders de Zichtbaere Wereld of 1678 fills a gap in publications in the Dutch language and in the articulation of a Dutch art theory. By asking purposeful questions about Dutch Baroque art theory and Van Hoogstraten's place within it, Thijs Weststeijn has provided convincing and thoughtful answers, and made a most appreciated and masterful contribution to the field.

One general problem with the few Dutch art theoretical writings is that they are often considered as step-children (at best) of the Italian art theorists, who were so highly productive that, by sheer volume, they dominated the discourse. Julius von Schlosser (1924) and J. A. Emmens (1968) dismissed Van Hoogstraten's treatise as unoriginal, because it drew on many sources, and fell outside the paradigm that they found in Italian art theory. More recently, scholars have begun to take on the individual Dutch authors, in isolation (as much as possible) from the Italians. To this end, Eric Jan Sluijter analysed Philips Angel's De lof der schilderkunst to determine that the predilection for representing the materiality of the visible world forms a major tendency in Dutch art, and this set it apart from Italian art and art theory. [1]

Until recently, Van Hoogstraten's treatise has generally been considered a compilation from many and varied sources that offers little original material, or a self-serving justification for the artist's status in an international cultivated circle of the arts. Weststeijn, without dismissing these characteristics, proceeds from the text itself to discern Van Hoogstraten's approach, both to his sources and to his milieu. This is a very fruitful means toward a full analysis of Van Hoogstraten's Inleyding. As the title implies, and as Van Hoogstraten wrote, there was to be another publication on the invisible world. Inherent in this topic are the relationships between these two publications, one realized and the other not, and Van Hoogstraten's concept of art with relationship to these two worlds, one visible and the other, invisible - or one material, and the other, ideological. Van Hoogstraten's book, in Weststeijn's interpretation, serves further as a course of instruction that charts the intellectual and moral development of artists.

Weststeijn applies the rhetorical arts to the practice of the visual arts. He demonstrates how rhetorical concepts, practices, and terms appear in Van Hoogstraten's own discourse, and may be used to interpret the works of Rembrandt and other Dutch artists. Van Hoogstraten probably attended the Dordrecht Latin School, where he would have studied Cicero, Quintilian, and Scaliger; yet his most immediate model for the rhetorical approach to art was Junius' The Painting of the Ancients (English, 1638, and Dutch, 1641). Establishing that the art of painting lies within the authority of literary tradition, Weststeijn restores a verbal language to a visual one, and reconstructs the vocabulary to discuss Dutch art. This is an especially useful structure for analysis with respect to representing human expressiveness. In the fourth chapter, "The Depiction of the Passions", Weststeijn demonstrates how Van Hoogstraten's ideas are rooted in or have resonance with philosophers, including Justus Lipsius and René Descartes; rhetoricians, including Cicero, Quintilian, and Isaac Vossius; and artists' writings, notably those by Federico Zuccaro and Willem Goeree. This situates Van Hoogstraten in the broad intellectual arena of western thought.

Whether artists made use of the Inleyding is not clear, but many artists undoubtedly shared at least some of the same cultural formation; consequently, we may use the Inleyding, and Weststeijn's interpretation of it, to clarify aspects of Dutch art. For Van Hoogstraten and for us, Rembrandt serves as "the ideal painter of the passions". Weststeijn provides a solid rhetorical framework for Rembrandt's terse statement of his own artistic goal: to attain the "greatest and most natural movement". This movement is on the one hand, the dramatic action in the painting, but on the other, the viewer's reaction. Kinship between visual art and rhetorical theory has been often noted, almost as a trope within art history. By working out the details with respect to Van Hoogstraten, Weststeijn has elucidated a central issue in the Dutch Baroque.

An underlying issue is how artists read, whether texts or images, and how theory and practice interact. For one outstanding reader, Rubens, art developed directly from his reading; for another, Rembrandt, reading enhanced his visual imagination. The relationship of Van Hoogstraten's reading to his art is here set forth, but more may yet be done. Most Dutch artists were not as well-read as Rembrandt or Van Hoogstraten, and most probably did not have the rhetorical background that came from Latin school. And in general, the few art treatises written in Dutch probably sufficed for the practicing painter; one, succinct in the extreme, is merely a large broadside: Pieter de Grebber's twelve rules. [2]

This study builds on a recent and welcome flurry of scholarship: Michiel Roscam Abbing (1993); Celeste Brusati (1995); Hans-Jörg Czech (2002); Jan Blanc (2006 and 2008). [3] If Van Hoogstraten seemed so neglected just a few years ago, today he is finally receiving due attention.