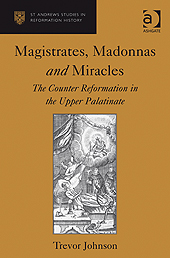 This book is Trevor Johnson's substantial revision of his doctoral thesis, completed in 1991 at Cambridge under the supervision of Robert Scribner. It is also a poignant publication after Johnson suffered a premature death in 2007 while at the University of the West (UK). The posthumous work joins others that have, in recent decades, done much to expand our knowledge and understanding of Catholic history in the wake of Trent.

Johnson's subject is the Upper Palatinate, nestled today in a tranquil corner of Bavaria and back in the sixteenth century between Franconia, Bavaria and Bohemia. Though not among the more notable regions, the Upper Palatinate's colorful confessional history makes it a potentially instructive case study. As explained in Part I, "The Palatinate Deformed", the Upper Palatinate underwent confessional changes in religion, starting with Lutheranism in 1556, Calvinism in 1559, a Lutheran restoration in 1576, and finally a reintroduction of Calvinism in 1589, which remained until Catholicism was reinstalled in the 1620s. Lutheranism took some root during these decades, and Johnson describes a "ferocity of resistance" to the imposition of Calvinist policy (31). The latter statement may well need to be circumscribed, for as in other regions, one can document confessionalized interests among the urban elite and landed nobles but is hard pressed to do so among the rest of the population. Johnson claims the populace became weary of the multiple confessional changes, but it is a speculative statement in a very brief chapter (Chapter 2) that is very thin on substantiating evidence. One wonders whether many subjects much cared about the voltes-faces, for as Johnson himself notes later on, the preoccupation of most parishioners, who lived in rural areas, was merely to access religious service in the face of challenging topographical and climatic realities (160) and to have a faithful and friendly minister (318). Such desires held true in any age prior to the twentieth century and could easily transcend the confessional regime in power. Johnson rests much of the book's thesis on his interpretation of these decades, which is that the alternating Lutheran and Calvinist settlements between the 1550s and 1620s created a "climate of religious instability" and "did much to smooth the impact of the Catholic restoration in the 1620s" (27). As it is, the foundation set in Part I, a mere 26 pages in length covering close to a century of history, is skeletal and faulty.

Part II, "The Palatine Informed", recounts the return of Catholicism to the Upper Palatinate. The Elector Maximilian of Bavaria invaded and seized control of the region in 1621 and stood poised to install the Counter Reformation. Recatholicization had been attempted elsewhere in the Empire prior to 1621, and Maximilian knew which attempts succeeded, which failed, and why. In cogent fashion, Johnson explicates how Maximilian navigated through an array of tensions and events, both internal and external. He opted not to extract Protestantism overnight but rather adopted a policy of gradualism. He and his magistrates managed the piecemeal removal of Protestantism, including its worship services, calendar and clergy, with "supple vigour" and "restraint" between 1621 and 1628, and simultaneously phased in Catholic religion. Then, in 1628 Maximilian shifted gears and issued his conversion mandate (Religionspatent), which required the population to convert to the Roman faith within six months. The Elector forced it on the nobility, some of whom signed on while others headed into exile. Otherwise one reads "the vast majority of the population" (72) opted for conversion over emigration. Johnson notes how fifteen percent of Amberg, the capital city, emigrated but then goes largely silent about the rest of the region's inhabitants. This, of course, raises thorny questions that Johnson seems not to recognize. Can one classify them as having "converted"? While the authorities might have perceived the choice as one of conversion, did their subjects do so? Did they intend their non-emigration to be a conscious rejection of Protestantism and embrace of Catholicism? Or did they identify themselves as Christians, whether devoutly or nominally, and regard both Protestantism and Catholicism as Christianity and continue to live in the Upper Palatinate because of it? Taking the documented response of a few in the leading city as indicative of the regional populace as a whole has been readily done by scholars but does more to muddy the waters. Towns and villages were not the same beasts. The second two chapters of Part II cover the steady build up of a competent Catholic clergy and reintegration of monastic orders, old and new, after they had been removed via the Reformation. General synods, visitations, clerical seminaries, recruitment of a disciplined, home-grown priesthood, and rural missions filled out the program.

The latter half of the book, Part III "The Palatinate Reformed", addresses "secular and ecclesiastical instruments [...] and their impact and their effectiveness in shaping a Catholic society, moving from conversion to consolidation" (155). By the end of the book one reads "the Counter Reformation had been successful in reshaping the Upper Palatinate's religious identity" and that it "was a remarkable transformation" (313). However, the historical evidence provided in the pages between is often inconclusive or limiting, and at times undermines the claim. For example, while Catholic literature and a rhetoric of abuse against confessional opponents "seep[ed]-in" and were "internali[zed]" by theologians and clerics (162-169), Johnson cannot demonstrate it did so among the general populace. Regarding the catechism, Johnson acknowledges the Church did not have the means in the first decades of recatholicization to promote an internalization of doctrine, and is left with conjecture about what happened from there: "We can assume that, over time, the catechism's familiar words, learnt by rote as described, would [...] have seeped into the consciousness of the Upper-Palatine populace" (160; the statement is further puzzling because it contradicts his later argument, namely, that parishioners were attracted not to bookish religion but to the performed religion of pilgrimages and utilization of sacramentals). Chapter 9 briefly raises the topic of baptismal bonds and naming practices yet has to conclude that "[c]ustom here was apparently completely blind to the period's confessional changes" (253). The rest of it addresses the reclamation of saints and relics; as in other matters, the bulk of the initiative came from authorities and certain towns, especially the leading one, Amberg.

Similar problems in the evidence appear elsewhere. While the authorities instituted certain rules on meat-eating and laboring on forbidden days so as to build Catholic identity (178-183), through the seventeenth century they regularly had to impose punishments on violators; in one case Johnson concedes "[i]t may be that the community did not see itself as threatened by such crimes, either because actual culprits were in a small minority, or, conversely, that the religious bans were generally seen as inconveniencing and impractical" (182). Too, the Catholic authorities had as much difficulty disciplining social and sexual indecency as did their Protestant predecessors (183-189). As for reviving Purgatory and works of charity towards the dead (189-198), Johnson can only cite a couple supportive examples from Amberg, and one of them, a specialized brotherhood founded in 1688 to assist souls which had no sponsor, was in decline already by 1707. Johnson refers to folkloric evidence for how "charity to the Holy Souls began in the home" (197), yet at the same time, despite the diocesan mandate to restore cemeteries to the Catholic standard, many parishes did not seem to regard such repairs "a priority even in the rebuilding and refurbishment programmes of the later seventeenth century" (195). Chapter 8 opens with the reinstitution of the Catholic sacraments (202-219), yet the discussion centers merely on how the clergy were to explain, defend and administer them. Moreover, three decades into recatholicization a 1656 Regensburg visitation "found many parishes remained without [the Borromean confessional] boxes and in some places which did possess them the old custom of confession in the sacristy continued" (215). The same visitation discovered that extreme unction "was the least administered (and perhaps most resisted) sacrament. The prospect of a deathbed struggle for acceptance or denial of a Catholic identity may have deterred families from calling out priests to perform the last rites" (219). Oddly, Johnson closes out the section by going back in time to the late 1620s to narrate cases of how parishioners on their deathbed refused the sacrament. Throughout Part III those corporate village institutions, such as the commune, so commonly seen in other studies of late medieval and early modern Central Europe do not figure in the equation. While Johnson states it is because more powerful entities crowded them out, one wonders whether "small rural communities" in fact "took their cue from their local lord and followed his lead in most matters, including confessional allegiance" (23).

Johnson's book stands on firmer soil on the matters of confraternities, sacramentals and pilgrimage. Here he can cite examples of lay participation which, at least in some cases, appears voluntary. Indeed, Johnson credits a resilient, popular religious traditionalism, one that predated the Reformation and survived Protestant efforts to shut it down, for facilitating recatholicization. The laity of the seventeenth century still wanted to take up rituals and objects that could manipulate points of contact between the natural and supernatural, and Catholic clergy accommodated the desire much more than their Lutheran and especially Calvinist predecessors had. These points get to the heart of Johnson's thesis, namely, that the success of the Counter Reformation would have been compromised if not jeopardized had either the clerics or laypeople not participated. Recatholicization happened not from above or from below but because of cooperation between the two.

Johnson declares that by 1750 "the recatholicization appears to have been consolidated" and "the Upper Palatinate's Catholic identity was no longer in question" (13). The claim seems fairly secure when extended to the ecclesiastical and secular rank-and-file but, based on the book's content, is less convincing when it comes to the regional populace at large.