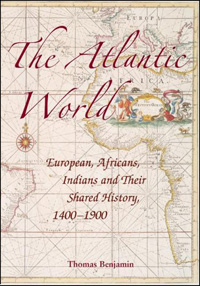 To my knowledge Thomas Benjamin's volume is the first single-authored work that surveys the entire history of the Atlantic World from the 15th to the 19th centuries - the period that has been the focus of so much attention by early modern and colonial historians in the past two decades. It follows the appearance of a multi-authored text on the same subject published by Harlan Davidson in 2007 [1]. Both are survey textbooks intended to introduce students to this broad subject, and both are essentially successful in doing so. With a sole author Benjamin's book achieves more continuity than the Harlan Davidson volume, but the latter demonstrates more depth, as it reflects the expertise of five authors.

Benjamin's book takes a clear stand on a number of important issues debated by recent Atlantic World historians. His work promotes the encounters thesis, which stresses that the Atlantic World was the world made by encounters among European, Africans, and Indians. In the past five to ten years this view has gained increasing prominence in the field, as opposed to views that stress physical geography, or shared identity and political concerns as the defining factors of the Atlantic World. While Benjamin promotes the view of the Atlantic World as distinct from global history during this era, he does see it as a developmental phase in the path toward globalization. Currently Atlantic and global historians are disputing both of these points and in so doing continue to advance our knowledge in both fields.

Lastly, Benjamin is for the most part clear about chronological boundaries of the Atlantic World. For years Atlantic historians were vague about this issue, but recently there has been improvement. Benjamin divides his book into three parts, with the first addressing the construction of the Atlantic World, the second how it operated at its peak during the 17th and 18th centuries, and the third how it declined or was transformed from the late 18th to the late 19th century. In Part One he follows the view that 1492 marks the commencement of this era, but he begins his study in 1400 to provide context for European transatlantic expansion and to identify antecedents to the pending encounters among Atlantic peoples. He then traces the rise of Portugese and Spanish empires in the Atlantic until the early 17th century. Part Two addresses Dutch, French, and English expansion and their assault on the Iberian empires and each other, which ultimately led to the ascendancy of the British Atlantic empire by the mid-18th century. Further, this section describes the rise of the Atlantic system, in which Europeans increasingly traded with Africans to acquire slaves as labor for the development of plantation economies in the Americas, which in turn provided exports to European markets. Part Three describes how imperial rivalry, colonial endeavors to achieve independence and revolution, and the push by Europeans, Euroamericans, and slaves for abolition and emancipation brought down the Atlantic system and ended or transformed the Atlantic World. The end date of 1900 is intended to cover the end of slavery in the Americas (when Brazil finally abolished slavery in 1888), with the recognition that slavery continued in Africa until well into the 20th century. In this sense Benjamin's end date is somewhat vague and arbitrary, as New World slavery became less of an Atlantic development after the end of the transatlantic slave trade in the 1860s, and slavery within Africa continued after 1900.

While Benjamin successfully highlights many important issues and debates in Atlantic history, taking a clear stand on most, there is relatively little in this work that significantly advances the understanding of scholars in the field. This is a reflection of the book's raison d'etre: It is a survey textbook intended primarily for introductory teaching purposes, something the short excerpts of "document inserts" and absence of footnotes highlight. One important exception to this is Benjamin's work with demography. Throughout this book we see invaluable tables in which he summarizes population trends among Europeans, Africans, and Indians, as well as transatlantic migrations, at times noting gender differences in the latter. This has never been done before, and it allows us to make important comparisons of demographic developments regarding Atlantic peoples throughout this era better than ever before. Of course there are problems with missing or sketchy data - something that is inevitable given the huge chronological and geographic scope of the book - but Benjamin points out where the problems are, and scholars would do well to work with what he has.

Because of available documentation, historiographical training and tradition, and intended audience, most Atlantic World studies contain strains of Euro-centrism, and Benjamin's work is no exception, in spite of his use of the encounters approach. For example, when describing the arrival of Columbus in the Bahamas in 1492 Benjamin is less interested in the immediate effect this had on Indians or their possible perceptions of this unusual development than he is in emphasizing that the admiral sought peaceful contact and cooperation with the Taino people (125). Crew members that Columbus left behind when returning to Spain instigated the destruction and violence, and upon his return Columbus was forced to deal with "rebellious" natives by directing a pacification campaign, with enslavement and redistribution of land that included demanding tribute from the Taino (127). Also, Benjamin describes the Inka counterattack against the Spanish as a "rebellion" (150). He stresses the importance of European skill in working with native alliances, but instead of focusing on success and failure for all peoples during conquest and resistance he stresses what worked and why for the Europeans and the importance of maintaining a balanced view of their character during this process - that is there were both greedy and noble Europeans involved (158-159). Also, for Benjamin the dynamic explaining the shift from Iberian to northwest European predominance in the Atlantic in the 17th and 18th centuries was European imperial rivalry, and not, for example, African and Indian participation in a European directed economic transformation associated with a consumer revolution throughout the entire region. There is also a useful extended discussion of how accurate and useful early European ethnographies of Indians were (including how sincere the European ethnographers were) in response to recent post-colonial criticism of these works, but Benjamin never tells us much about the content of these works - that is the Indians (277-293). Lastly, most of the discussion of the Atlantic slave trade focuses on how Europeans organized it and whether it was truly capitalist, while not enough attention is paid to its effects on Africans on either side of the Atlantic (e.g. 348-349).

The Euro-centrist nature of the work is problematic, but it is still useful to introduce students to the relatively new field of the Atlantic World from the 15th to the 19th centuries. The ambition of the author is admirable for tackling such a huge project. If it goes into a second edition, I do hope that he and the press correct the numerous typographical errors, repetition of ideas, and the absence of bibliographic citations for some works referenced in the text.