Susan P. Mattern: Galen and the Rhetoric of Healing 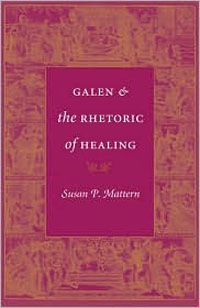 Born AD 129 at Pergamum, Galen studied there and at Smyrna, Corinth, and Alexandria, and spent a large part of his life in Rome. He is known as the author of an enormous corpus of medical works, yet Galen's longest work, now lost, was a dictionary of Attic words (8). Galen the famous physician was deeply involved in sophistic culture (8). In many case stories that Galen relates, oral debate plays a central role, so much so as to make Galen's deeds among his patients appear very similar to verbal contests of the Second Sophistic (80). It is those deeds among his patients, and how Galen writes about them, that form the subject of Susan Mattern's book, "a book not about medicine, but about a physician and how he writes about his medical practice" (x; 2). Mattern undertakes to reconstruct Galen's social values and self-image (4), and attempts to illuminate the relationship between Galen's stories about patients and the society that produced them (49). The result is an insightful, and very readable, introduction to Galen for scholars interested in the society and culture of the Roman Empire.

Galen recognizes stories about patients as distinct units of discourse, referring to them simply as "patients" (ἄρῥωστοι) (41). Counting each patient as a separate story and different versions of the same story as separate stories, Mattern finds 350 case histories in Galen's corpus (41). Most describe Galen's own patients, and are presented in the first person (40).

Mattern discusses the role of case stories in earlier medical tradition, including the Hippocratic Epidemics, histories by Erasistratus of the early 3. c. BC, and Rufus of Ephesus (1. c. AD), and offers a brief discussion of healing inscriptions, most notably those at Epidaurus, which probably reflect oral traditions (27-37). Mattern's description of the narrative structure of Galen's own case histories - not particularly interesting in itself, as Mattern admits (67) - aims to show that Galen's stories resemble inscribed stories about the miracles of Asclepius more than they resemble Hippocratic case histories (67).

It is likely that Galen composed his stories from memory (44). On where and when his stories take place, he offers hardly any specific details (48). He may have expected his readers to imagine Rome as the setting for most of them (52). He treated slaves, peasants, aristocrats, and, for a time, gladiators. Conspicuously absent are references to craftsmen (118). Galen does not try to portray himself as a doctor to the elite classes (117).

In many stories a crowd of observers is present, which is often described as the patient's friends (85). Galen's own "friends" and "followers" were usually present too, another crowd that could include physicians, medical students, laymen interested in medicine, and philosophers (19). Galen's professional relationships were not easily distinguishable from friendship (141-2).

Many of Galen's stories have agonistic elements (71), and much of his work was intended to refute or to humiliate a rival or predecessor (15). His rivals are labelled bandits, villains, spewers of nonsense, ignorant, malicious, arrogant, and more (73). This kind of competition was linked closely with ideas of manliness (74), and Galen's writing on emotion often concerns anger, important because it is linked to honour (134). Only in one story does Galen receive a financial reward, and that sum is best construed not as a fee but as a prize for the victor in the medical "contest", like the cash prizes offered at agonistic festivals (83). Especially the agonistic features in Galen's case stories call to mind some Biblical stories, and Aelius Aristides' Sacred Tales (96).

Medicine as a science and a profession was associated with Greeks, therefore Galen's argument that the excellent physician is identical with the sophistic pepaideumenos, the educated gentleman steeped in the highest disciplines of Hellenic paideia, is tied to questions of Hellenic culture and identity (24-6). In this context it is important that Galen, as Mattern rightly stresses, interpreted the city of Rome, and perhaps its social organization, as Greek (52). In doing so, Galen continued a tradition we commonly relate with Dionysius of Halicarnassus and the time of Augustus, but which went back as far as Aristotle and Heracleides of Pontos.

Galen wants to assert over his patients the kind of power exercised by the head of household over his servants (146). On the other hand, physicians were often slaves or freedmen (23), and many of the therapeutic tasks Galen performs seem servile (148). Galen therefore positions himself and his art at the other end of the social scale, deliberately blurring the line between physician and well-educated aristocrat, and claiming that he was known as a philosopher (23). The few patients whom he names are likely to belong to the intellectual-cultural elite (99).

Mattern doubts that Galen's case histories accurately represent the demographics of his practice (110), because he preferred to write about the kind of patient he considered typical or even archetypical, the urban male of free status, in the prime of life (118). This ideal patient, which conforms roughly to the Greek idea of the citizen (118), formed the centre of Galen's theory of temperament and hexis: men in their prime are according to Galen hot and dry, whereas women are cold and wet (103) (though individuals in those categories might vary in their temperaments; 105). He probably told few stories about his elderly patients because they are a marginal group compared to his ideal patients (110).

Another marginal group are women. About twenty-five of Galen's stories concern female patients (112), but he is not interested in them as a category (x; 114). His stories about women do not differ significantly from his stories about men (x). However, female patients do not have "friends" (91). They have midwives, attendants, servants, and husbands (91). Women do not play the role of rivals in Galen's agonistic stories - he does not compete with midwifes (73) - nor do they play the role of witnesses or judges (89). Healing, as portrayed in the case histories, is a male activity (91).

Galen often mentions his patients' lifestyle: food, drink, bathing, exercise, and sleep (in that order) are important topics in the stories (126). He approves of exercise but criticizes athletes as representing a perverse extreme, so dedicated to exercise that they are useless to the city (129). Galen, like others of his day, recognizes oratory as a form of exercise (127). The duality between urban and rural life - between peasants and city dwellers - is more pronounced than that between aristocrats and slaves. Both slaves and their masters might be found in the palaistra (131).

Mattern has written an admirable book that will make Galen accessible outside the circle of scholars specializing in ancient medicine. A minor objection: the father of Thessalus (1 c. CE), founder of a detested school of medicine, was not necessarily in truth a weaver (24; 58). To say of him that he carded wool (ἔρια ξαίνοντι: 9.657; 10.10) was a strongly depreciative way of saying that Thessalus' father did not belong to the cultural elite. The expression brings to mind the word λινουργός, used to describe groups at the bottom of the social scale in other authors, most notably Dion Chrysostomos, while it contained also a hint at effeminacy.