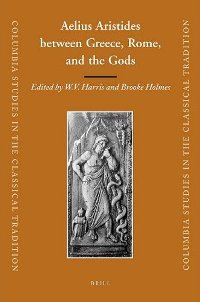 Whether or not contemporary audiences were indeed stupefied by the complexity of Aelius Aristides' art as he himself claims (Or. 28.120), the orator presents challenges for the modern reader. To list only a few uncertainties surrounding Aristides, we do not know whether his oratory was truly popular (279); whether he was truly an invalid or a hypochondriac; whether a narcissist or one who posed as one. He has been both admired and detested (255). On the way to forming a scholarly consensus on those and many more issues, the contributions included in the volume under review are very welcome. Fourteen chapters fall into four parts dealing with (1) Aristides' relation to the literature of the past, (2) his self-presentation, (3) Aristides and the Roman empire of his times and (4) his reception.

E. Bowie establishes that Aristides cites early lyric, elegiac and iambic poetry infrequently. When he does he prefers Pindar, possibly because Aristides was convinced that he himself had the outstanding natural capacities which Pindar praises (17). E. Oudot interprets Aristides' Panathenaic Oration as a manifesto against Thucydides (34). Since according to Aristides Athens' real power resides not in her political and military rule, but the Attic tongue and everything that is connected with it (44), oratory alone has the legitimacy to speak about Athens, not history and its prominent representative Thucydides (46). (Aristides probably implies that he himself, the Atticist orator par excellence is entitled to speak about Athens).

According to S. Said, the most prominent myth in Aristides' speeches is that of Heracles (52). In his Hymn to Heracles, Aristides recasts the hero into a world emperor (63) or a provincial governor (64). On the other hand, in To Plato: in Defence of Oratory, Aristides completely transforms the role of Prometheus into an ambassador to Zeus about the desperate situation of men (65). Zeus' remedy for mankind is oratory, but this remedy is given only to "the best, the noblest and those with the strongest natures", that is, the members of the elite (66).

Using literary and epigraphic evidence, G. Bowersock establishes very plausibly that pantomimes were included in thymelic competitions between CE 170 and the early years of Commodus (75). This implicit elevation of pantomimes to the level of sophists (77), together with the explicit elevation of one particularly famous pantomime to that level by Hadrian of Tyre (72), must have enraged Aristides, who denounced the pantomimes in a lost speech known from Libanius' sixty-fourth oration.

B. Holmes' piece on Aristides' "illegible body" owes much to 1990s scholarship on 'bodies becoming texts' (and is not as critical of such interpretations as Harris, 4, suggests). One can certainly agree with Holmes that these texts are the products of ambition, both literary (81) and other. But it will probably be more profitable to continue the discussion along the lines suggested by M. Korenjak in an insightful study that finds no mention in this volume despite the Sacred Tales' ubiquity. [1]

In the sixth chapter, J. Downie offers perceptive observations on the role of bathing in Aelius Aristides' first Sacred Tale and in his Or. 33, for instance that the dream narrative of HL I.19-21 aims to suggest that Aristides, like Socrates, moves beyond conventional moral categories (129). Also A. Petsalis-Diomidis' study concerns mainly the Sacred Tales. She believes that they can be called a pilgrimage text (137), and sees in them an apologetic text, partly aiming to silence those who criticised Aristides for not declaiming often enough (148). She underlines Aristides' deeply religious outlook (150).

D. Fields offers an interesting comparison between Aristides' and Plutarch's discussions on self-praise. Aristides presents self-praise as a matter of honesty (163), a matter of parrhesia (speaking the truth: 162) and even of benevolence because, left to their own devices, his ignorant hearers would be in no position to judge his speeches (163).

L. Pernot calls attention to Aristides' omission in his To Rome of Rome's history and culture. Pernot also underlines the importance of figured speech and particularly the figure called τὸ ἐνάντιον ("the opposite": saying the opposite of what one means) for understanding the orators of the Second Sophistic. This is an important article, because risky though it may be to try to interpret an author's silence on certain matters and to try to read between the lines (198), it is probably less dangerous than taking Sophistic works at face value. Pernot's study concerns Aristides' use of the figure called τὸ ἐνάντιον in speeches other than To Rome. However, Aristides says in that speech (Or. 26.40) that speaking of the Greeks he risks being accused of speaking of unimportant things, a statement that must have sounded a paradox coming from Aristides. Though Aristides heaped praise on Rome the imperial power in To Rome, the phrase is an exaggeration to the point of being a blatant lie, and can well be understood as an example of the figure studied by Pernot.

F. Fontanella sees the oration To Rome as a response to Polybius' doubts about the Roman empire, and shows that we must look for more than one goal and for multiple layers of meaning in an orator of Aristides' calibre. Fontanella detects in To Rome Polybian themes that Aristides appropriated, and argues that Aristides, though he never explicitly cites Polybios (212), responds to the doubts raised by the Greek historian in the so-called second introduction to his history (213).

C. Jones argues plausibly that Phrynichos, a contemporary of Aristides, is to be counted among Aristides' admirers. Jones dates Phrynichos' (extant) Ecloge ca. 177-180 CE, and the first version of his Preparation at around the same date (257). Like Aristides, Phrynichos was an Atticist (261). He probably heard the lectures of Aristocles, Aristides' teacher at Pergamum, and was perhaps also a patient in the Asclepieion (258-259). [2]

The final two chapters are concerned with Aristides' Nachleben. [3] R. Cribiore demonstrates that Libanius imitated Aristides both in his early years and in his Autobiography, written 378 (267-271), and even after 387 when he composed Or. 3 (271-273). L. Quattrocelli argues that despite caustic and occasionally even vulgar scholia of Arethas the 10th-century archbishop of Cappadocian Caesarea (290), Aristides was widely admired by the Byzantines. His popularity might contribute to a better understanding of both Aristides and the Byzantines. [4] As for the moderns, this volume is another sign that the prejudices of the Renaissance and Enlightenment concerning the Greek literature of the Roman Empire are slowly but surely receding.

[2] Cf. C. Jones: The survival of the sophists, in: Brennan, T. C. and Harriet I. Flower (eds.), East & West : Papers in Ancient History Presented to Glen W. Bowersock, Cambridge, Mass. 2008, pp. 113-125, on Phrynichos as "a more accurate barometer of later preferences than Philostratus".

[4] See A. Kaldellis: Hellenism in Byzantium. The transformations of Greek Identity and the Reception of the Classical Tradition, Cambridge / New York 2007.