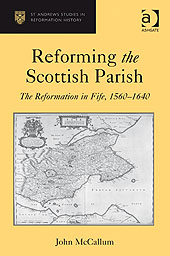 In recent years, Scottish Reformation historiography has advanced remarkably, shifting the focus away from the once predominant focus of relations between the church and the state. A range of studies of ecclesiastical discipline and popular belief have added new dimensions to historians' understanding of the issues and processes involved in the religious changes of the early modern period. John McCallum's book on Fife makes a significant contribution to that corpus of work. Through a careful and thoughtful interrogation of surviving church records, he advances the discussion in a number of significant ways, drawing upon work elsewhere in Britain and Europe, and thus ensuring that the discussion of Scotland is firmly placed in a context that will be relevant to scholars of other Reformations as well as of Scotland. It takes a much longer view of the process of Reformation than has commonly been the case in Scottish works, where there has been a tendency to address the issue of the 'success' or 'failure' of the Reformation in a much tighter timeframe of no more than three or four decades after 1560. Studies of the progress of the Reformation in England and Continental Europe have shown that effective establishment of religious change needs to be understood over a duration of up to about 100 years after the official changes took place and McCallum makes effective use of this longer-term perspective.

The book starts with the important assertion that "for all the local studies" of the Scottish Reformation, "little real parish history has been written" (4). To fill this hole in Scottish Reformation historiography, McCallum proceeds to examine the clergy, the exercise of ecclesiastical discipline, the nature of worship and of religious instruction. The picture of the establishment of the Reformation that emerges is one of gradual progress rather than overnight success. For the first three decades after the Reformation, most parishes had to share a minister with at least one other. Fewer than one in four of the post-1560 ministry had served in the old church, which amounted to a real crisis of recruitment that took over a generation to rectify. Not until the 1590s could almost every parish expect to hear a weekly sermon, although there was variation, as urban parishes might be accustomed to two preaching days in a week while some rural churches were lucky to have one sermon in a month. Before that decade, worship for many of the laity would have involved, more often than not, listening to a reader reciting set readings and prayers and joining together in singing metrical psalms.

The timescale for the establishment of the ministry in Fife was mirrored in other spheres, such as the establishment of kirk sessions and the growth of their activities in enforcing moral discipline on the populace. McCallum is rightly cautious about evaluating this on the basis of surviving records and he takes care to use more than just the existence of kirk session records to demonstrate the gradual nature of these processes.

Some historians have suggested that the 1590s were a decade of crisis of the church, something which a number of contemporaries believed as they perceived a decisive shift away from a church which was virtually autonomous towards a strongly Erastian settlement. For Fife, however, they appear to have been the crucial decade of transition, during which the key features of the Reformed church were established and after which the strength of the church grew. Most parishes were provided with their own preaching minister; there is evidence for the widespread establishment of kirk sessions and real efforts at effective discipline. From around this time also, the earliest written and printed sermons, catechetical texts, religious poetry and laypeople's notes on sermons survive. From the early seventeenth century, almost every minister was university-trained (compared to only about 10% in England) (137). From that period too, some thorough analysis of the application of discipline is possible and the results are surprising. Although sexual sins were the most common, contrary to what other scholars have suggested about post-Reformation discipline in Scotland, they constituted less than one third of all cases, while public insults and Sabbath breach together accounted for more than half. McCallum also shows, in another departure from received wisdom, that women were not disproportionately targeted by kirk sessions. Indeed, overall, more men than women were disciplined and even in sexual cases, both sexes were equally likely to appear before the session (207-14).

McCallum's key argument in relation to discipline and to much else is that local variations and local circumstances have to be taken into account. Overall statistics mask considerable variations between individual parishes and these too are explored and reflected upon. Indeed, the key strength of this study is its insightful and thoughtful approach to the sources and the evidence that they contain, which allows ambiguities to be explored and uncertainties to stand.

The only note of criticism lies in the way in which Kipling's twin 'imposters' of triumph and disaster (or in this case success and failure) are handled. While McCallum began with a rejection of an analysis of the Reformation that deals in these commodities, he is drawn back to them, time and again, and focuses much of his conclusion on the issue of success. In doing so, he demonstrates that such an analysis is inescapable for, after all, the questions of whether something worked or not and the ways and extent to which it worked are key to understanding and contextualising any historical phenomenon. McCallum has asked questions and provided intelligent and thoughtful answers to them. He ends with an intriguing and attractive paradox. In spite of the reformers' aspirations to put the preaching of the word and ecclesiastical discipline at the core of their programme, it was their failure to establish these things overnight that allowed the new religion to become, by 1640, so strong and accepted.