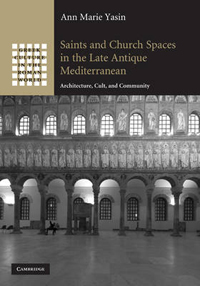 Yasin begins Saints and Church Spaces with an accessible intellectual biography from which we learn that her "project [...] evolved from a study of saints' memorials per se into a broader investigation into the social and architectural effects of the rise in saint veneration on early Christian ecclesiastical space" (4). This important book is an ambitious investigation of how saints in general - not just their relics, tombs, or martyria, but also their images and references to them - affect "late antique sacred topography". Her broad materials include pan-Mediterranean public church architecture from the later third to the seventh centuries, with a focus on the fourth to the sixth centuries, and a clear definition of what she means by "church" (7-8). The project thus ultimately involves analysis of art and architecture, and Yasin primarily turns to this task. But she is also interested in evidence from literary sources and in a study of ritual and practice, and what we can reconstruct about communities and their social interactions. The book is scholarly but still accessible, and generally jargon-free; it contains a good number of helpful, clear plans and photographs.

Yasin teaches that when we study saints and church architecture in antiquity, we should not look to relics alone. The saints look out from images, they are mentioned in inscriptions, they are voiced in liturgy and in prayers. And their function in church structures is more complex than simply sanctifying the church altar and providing holiness and possibly salvation to those buried most proximate. The book "suggests that the impact of saints' cults on early Christian sacred geography is more pervasive and diverse, but perhaps less novel and radical than has been previously supposed. Specifically, it argues for an understanding of saints' cults as a powerful means of extending pre-existing notions of corporate identity, intensifying social hierarchies, and connecting local Christian groups to larger earthly and heavenly communities" (6).

Chapters 1 and 2 examine the context from which early Christian churches emerge. Chapter 1 discusses early Christian communities, their gathering places, and ideas of sacred space before Christians had the capital and political freedom to build. Yasin also delves into early Christian literary discussions of sacred space, showing, for example, how Clement and Origen refute temples and sacred architecture, articulating a theology of a God who cannot be contained. Here, more attention to the rhetorical context - that is, the politics and polemic of early Christian arguments against the political and social order - would have helped Yasin to articulate more strongly a nuanced analysis. The theological idea of a God with no place / all place, or the concept of the theologically or philosophically correct human as God's own temple, is certainly prevalent in early Christianity, but such concepts function not only as philosophical articulations, but also as apologiai in the face of Christian poverty and lack of political clout to construct their own cult centers, and as invective against and self-construction in relation to contemporaneous cults.

Chapter 2 responsibly pauses at Roman practices of collective burial before proceeding to the question of how early Christians commemorated their dead in their churches. Analysis of family burials from Aquileia to the Isola Sacra to Pupput (Tunisia) and discussion of the Parentalia and the roles of collegia as burial societies allow the reader a broader context of early Christian rituals and architecture - to see both similarities and differences. Yasin shows that Roman burial practices are based upon kinship ties linked to Roman definitions of familia. Yasin argues (and I would have liked to hear more) that Christian epigraphic tendency to reduce nomenclature, to omit titles, or sometimes to offer anonymous dedications differs from contemporaneous religious practices, a difference that may indicate "a broad change in Christian attitude toward death" (91). Moreover, Yasin demonstrates that the idea of burials ad sanctos is only partially true: while some burials crowd up against the tomb of a saint or martyr, not all do with any regularity. And Yasin makes clear that the bringing together of living and dead in religious space and ritual is one of early Christianity's strange habits, compared to contemporaneous Judaism or "pagan" cults (82).

Chapter 3 follows Roman euergetism into the Christian churches, noting how Christians (unlike Romans) do not connect themselves with past benefactors, and hypothesizes that the epigraphic slump of the fourth century and following (108ff.) had to do in part with Christian euergetistic habits: namely, to offer shorter and less detailed donor inscriptions. In this chapter, Yasin begins to demonstrate one of her strongest skills (and a methodological intervention): helping us to understand the ancient viewer as one who embodies memorialization by moving toward and reading certain inscriptions in the church.

Chapter 4 challenges the idea that the saint's relic is the only or most important way of honoring saints within the church. "Multiple ritual focal points" (156) exist at many churches. Indeed, sometimes the altar and these multiple points where saints are honored are in "visual dialogue" (171). Yasin makes you understand that the church is not static: it is a place where the worshipper is propelled between multiple points of sanctity, honoring multiple saints; indeed you may be able to eyeball one sanctified location as you stand in another. One wants more here: How do these multiple sites of sanctity shift over time, growing more and less important? What about processions? Liturgical furniture that is moveable? Reliquaries or icons that can be shifted in space over time? The story Yasin tells is compelling, and it also calls to mind what she cannot tell (because of the paucity of evidence, literary and archaeological; because of the long duree of use of a church).

In her final two chapters, Yasin asks what saints do in church. Chapter 5 elaborates how the presence of the saints can stimulate communal prayer. Starting with a close reading of Augustine's De cura, Yasin exposes a late antique debate about how, precisely, the saints are efficacious in their presence in churches. Paulinus may have thought that Felix resided in his tomb at Nola, but Augustine too thinks that saints "aid and intervene in human affairs" (220). Yasin uses not only this literary evidence, but also mosaic inscriptions and iconographic evidence to support her argument that churches are locations where the saints interact with the living and the dead, and not just through proximity to their relics. She offers sensitive readings of churches in Sbeita, Ammeadara, Nebo, and Thessalonikē, where inscriptions cause the common church-goer to pray deliberately or accidentally: that is, to give voice to the requests of the donor to the saint, simply by reading the inscription. This rich analysis made me want more: What evidence do we have of basic literacy at the time of the production of these inscriptions? What archaeological evidence do we have of wear within the sanctuaries, or light or the covering of such inscriptions (if they were on the floor)? Does the positioning of the inscriptions indicate the use of patterns in the church (as we can see, for example, in the basilica preceding the Octagonal Church at Philippi)?

The final chapter demonstrates the ways in which saints order the space of a church. Yasin expertly explains how images of the saints construct or confirm extant social hierarchies; they are depicted in the apse, for example, alongside or in juxtaposition with clerics and / or ecclesiastical donors, and of course float above the ecclesiastical experts at work just below at the altar. She again demonstrates through literary sources and the space of the churches how saints are honored and remembered apart from their relics: through the reading of their names (especially in Eucharistic prayers), through the performance or at least reading of their stories (I would have liked to have heard more of Yasin's speculations on this ritual), through their mention in inscriptions and their images. Yasin's analysis of the construction of social community through the saints invites even more speculation: What is going on through the temporal as well as spatial juxtapositions of images, the collapsing of time so that Christ, martyr or saint, and bishop or cleric are contemporaneous? In what sense are the saints used to assert or construct an alterative sense of time?

What more would I want from this already excellent book? Had she had the space, or for her future work, I would ask four things of Yasin. First, Yasin cites a number of theorists who influence her thought: Lefebvre, de Certeau, J. Z. Smith, Tilley, among others. A more explicit and consistent reflection on how these theorists help her would have enriched the volume. Second, Yasin's use of the term "geography" at the beginning of her volume led me to believe that her spatial analysis might extend outside the space of the church and into pilgrimage and practices that linked sacred hotspots. How would she continue her work on this different scale? Third, I was curious about how Yasin's book would have changed or deepened with a more thoroughgoing investigation of literary sources, especially hagiographies or apocryphal tales of the apostles and others, including an analysis of their variations (regional, in terms of gender, theology, etc.).

Finally, although at the beginning of her book Yasin argues that she presents a wide geographical spread of evidence to show large scale tendencies in the Mediterranean world, I still wondered as I read: Why did she provide this example and not another? By what criteria does she choose her evidence in any given chapter? What problems may arise from these implicit criteria? In addition, the admirably wide scope of her knowledge sometimes has the result that we do not have the opportunity to learn deeply about one given site. When Yasin pauses to interpret a given site (e.g. donations of Juliana, church of St. Polyeuktos (Istanbul), 139, passim) in depth, one learns more and understands more completely than when a range of examples are quickly provided.

Book reviews can function as intellectual dinner party invitations. Yasin should gather in the flesh or intellectually with following scholars for the mutual benefit of their work. Elizabeth Castelli's Memory and Martyrdom primarily focuses on literature about saints, and thus her content and theorizing (especially her thinking through Halbwachs) both challenge and complement Yasin's work. Patricia Cox Miller's The Corporeal Imagination, with its focus on saints' relics, images, and stories, provides a different theoretical framework within which to consider many of Yasin's data: thing theory and materiality. Georgia Frank's Memory of the Eyes would further enrich Yasin's work, since Frank considers living saints and the sacred geographies they created around their living bodies, as well as the practices that their pilgrims developed in traveling to them. Regarding the senses and the experience of church spaces, I wondered what conversations would be sparked between Yasin and Susan Ashbrook Harvey's Scenting Salvation.

A stanza from Yeats' 1926 "Sailing to Byzantium" reads: "O sages standing in God's holy fire / As in the gold mosaic of a wall, / Come from the holy fire, perne in a gyre, / And be the singing-masters of my soul. / [...] gather me / Into the artifice of eternity." Yasin's book helps us to glimpse this: the saints as masters and guides of late antique Christian souls, surrounding them in gold (or silver), on mosaics, names and dates carved in columns, virtues inscribed upon the epistyle of the church. Her approach extends past other scholars' focus on the question of how holiness was conferred to the common person by the relics and bones of the saints. Her book thus puts us more firmly in a whole world of religious life and experience in early Christian churches, where not only bones, but names, stories, seeping oil, the walk around the church itself brought together living and dead, reaffirmed hierarchies, comforted, and created memory and community.