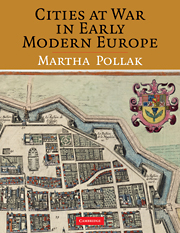 In Early Modern Europe cities underwent great changes. Against the background of new social, economic and - above all - military developments, architects, town planners and builders of fortifications displayed their specific reactions. In face of these challenges they constructed new bastions that were to meet the permanent threat of war.

Martha Pollak, who is Professor of Architectural History at the University of Illinois in Chicago, presents on 354 pages (including introduction, notes and index) a detailed view of the fortifications of major European cities between 1550 and 1770. The five chapters of the book deal with "Pentagonal Citadels and the Emergence of Military Urbanism", "Military Culture and the Dissemination of Urban Knowledge", "Siege Views: The War of Military Images", "The Forms of Military Urbanism" and "Celebrating Peace: Triumphs, War Games and the Transformation of Urban Space". An epilogue: "Fireworks and Illuminated Architecture" concludes the text, which is interspersed with numerous illustrations that offer a vivid impression of the subject matter. The development of effective artillery in Early Modern Europe had lasting repercussions on the conception and design of cities. The author analyses a cross-section of these from Scotland down to the Ottoman Empire and from Cyprus to the American colonies. She particularly emphasizes the impact on city architecture by using the term "military urbanism". Although massive fortifications were taken down in later centuries they nonetheless formed the outlook and the grid of many modern cities, even in the USA.

Illustrations and descriptions of cities started in the 16th century and they offer precise views of fortifications and surrounding landscapes. The German Mathias Merian is prominently citied among other engravers. The decorative aspect of public buildings in their renditions is also referred to as well as their commemorative function. Printed views of cities had their origins in Italy (Venice, Naples and Rome). The fractured political landscape with its many capitals and residences created a market for such paintings, engravings and tapestries for several centuries. It was especially the major European rulers who commissioned military architects and who controlled fortified cities, Louis XIV standing out among them. Urban design and housing profited much from the practicality of military architecture, as did visual art through the many commissions and sculpture through the desire for honour and remembrance. Cities also used to provide backgrounds for historical events and celebrations, to create enjoyment, pride and a congenial atmosphere. The author in particular stresses the interdependence of artists, patrons and designers in Early Modern Europe, who all helped to finally engineer new and splendid fortifications and who - like Charles V - showed how political propaganda could be spread via art. Pollak does not leave out any of the outstanding designers (the greatest being Galileo Galilei) of new military construction of ideas. In the late 15th century polygonal fortifications began to replace medieval walls in response to the effectiveness of modern artillery. The massive bastions and citadels and the "sloping walls of earth and masonry" were totally unprecedented. The citadel reflected a city in itself, while the city in turn slowly adapted itself to its new defenses. Urban pride and pleasure also emanated from the citadel. In chapter one "The Geometry of Power" the author studies in particular the new "fashion of the pentagonal citadel between 1534 and 1680", in chapter two "Military Culture and the Dissemination of Urban Knowledge" illustrations mainly centre on southern and western Europe, yet places like Wolfenbüttel, Stralsund and Straßburg also serve as examples. Chapter three "Siege views: The War of Military Images" is about the renditions of this kind of warfare especially in woodcut illustrations, with Vienna as the best example of these, and the tapestries of Charles V's conquest of Tunis as the most famous ones. "The Forms of Military Urbanism" (chapter four) deals with the impact of fortifications on urban design (streets, gates and walls). In chapter five Pollak writes about "Celebrating Peace: Triumphs, War Games and the Transformation of Urban Space". She points at processions, triumphal arches, equestrian statues and games in forms of naumachic and fictive assaults. The epilogue, as mentioned, is about "Fireworks and Illuminated Architecture".

All in all the book offers an exhaustive treatment of the subject matter and will certainly be for a long time the most learned study of it. It includes all aspects, is meticulously researched and lavishly designed. Its wealth of information, especially its illustrations, almost overpower the reader. It is meant for military experts and all those who are interested in architectural history and in the history of land warfare and urban fortification. In spite of references to numerous sources and multiple bibliographical notes one point of criticism could be that the more recent historiography, for instance the one pertaining to Eastern France in the period that is covered, is only paid scant attention to by the author. The text is densely written and does not always make easy reading due to its specialist vocabulary and the foreknowledge that is required. Mention could be made that fortified cities were also distinct targets in Germany´s Thirty Years´ War and that they were often blackmailed with the threat of total destruction, which was sometimes actually carried out (e.g. Magdeburg).