Albert Boime: Art in an Age of Counterrevolution 1815-1848, Chicago: University of Chicago Press 2004 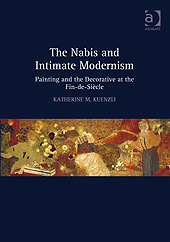 The Nabi aesthetic has proved elusive to theories of modernism. Artists such as Edouard Vuillard, Pierre Bonnard, Maurice Denis, Paul Ranson, and Paul Sérusier embraced large-scale decorative panels as well as small-scale, fragile works in media such as painted paper. Although as a group, these artists rejected the Impressionist focus on external appearances in favor of a quest for spiritual or inner truth, several did paint Neo-Impressionist, modern-life themes such as public gardens. Their ongoing involvement with an aesthetic of the decorative, however, has been difficult to reconcile with a narrative of modernist easel paintings that moved toward abstraction.

Katherine M. Kuenzli's book, The Nabis and Intimate Modernism: Painting and the Decorative at the Fin-de-Siècle, makes a very strong case not only for the "intellectual seriousness" (1) of the Nabi movement, but also for its modernism. In a series of interconnected essays, Kuenzli explores the intellectual ambitions as well as the contradictory aims of a group that produced mass-market posters as well as elite decorations. Readers will be struck by the tremendous lucidity of the book's arguments, especially as the author tackles the paradoxes and contradictions that attend the Nabi project.

Many art historians, when touching on Symbolism in a survey course, find themselves quoting Maurice Denis ("Remember that a painting - before being a nude woman, a battle horse, or some anecdote - is above all a flat surface covered with colors assembled in a certain order"). And although Denis was setting out principles of the Nabi movement when he issued his manifesto, the line is often recalled as a signpost on the road to Clement Greenberg's theory of modernism, the dominance of which has contributed to the denigration of Nabi art. "What has gone almost unobserved, however," states Kuenzli, "is that the same essay that begins with a seeming declaration of pictorial autonomy and self-sufficiency concludes by invoking Richard Wagner" (94). Kuenzli quotes Denis as he lauds the "blue arabesques in the background" of the Mona Lisa as a "prestigious accompaniment to the invasive and caressing rhythms supplied by the orange motif, like the violin's seduction in the Overture to Tannhäuser!" Kuenzli sees these Wagnerian aspirations as "part of an attempt to forge a Gesamtkunstwerk, whether for the theater or for private clients" (95). Her focus on Wagnerianism, which she defines as the French Symbolist construction of Wagner, enables her to unify some of the most diverse and contradictory strands of Nabi practice.

For the Nabis, Wagnerianism was paradoxical. On the one hand, it drew on the work of Liszt and Baudelaire in considering Wagner a "poet of interiority," and his music conducive to "an experience of imaginative reverie" (71). Yet Wagner was also the central reference point in the group's collectivist yearnings and in their search for the Gesamtkunstwerk. "For Vuillard as for Mallarmé and his associates," she writes, "Wagnerianism represented the dream of aesthetic and social unity rather than its accomplishment" (97). Kuenzli sees a productive tension between interiority and collectivity as inhering in Wagnerianism as it runs through Nabi decorations for Maeterlinck's plays, van de Velde's interiors, and Vuillard's and Bonnard's elaboration of "a single composition across several canvases" (158). As she deploys the concept in focused chapters devoted to discrete themes and projects in Nabi work, her construction of Wagnerianism enables her to bring the artists' intellectual goals into sharp focus.

It is not easy to reconcile Bonnard's and Vuillard's decorative panels - many painted for specific homes and patrons - with Bonnard's commercial posters. These artists' secularism would appear to clash with Denis' ardent Catholicism. Van de Velde was a member of the Parti Ouvrier Belge; Vuillard and Bonnard demonstrated anarchist sympathies; Denis, Sérusier, and Ranson sided with the French military establishment against Alfred Dreyfus. These are but a few of the contradictions in forms, styles, and political views that make Nabi work difficult to grasp as a modernist whole, yet Kuenzli's multi-layered approach allows her to stitch together a divergent set of projects into a coherent aesthetic.

In her analysis of several otherwise diverse works, Katherine Kuenzli interprets the Wagnerian Gesamtkunstwerk as the model for a dissolution of boundaries, such as those between media, or between viewer and work. The Nabi theater aesthetic, for instance, "was premised on breaking down physical and mental boundaries between actors and sets, as well as between stage and audience" (81). Like the proponent of Art Nouveau interiors Siegfried Bing, the critic Julius Meier-Graefe evidenced an "essentially Wagnerian conception of interior decoration as enabling an imaginary and pleasurable loss of self" (158f.). In Vuillard's decorative panels, painted for the physician Henri Vaquez, "what is most compelling [...] is not their ability to conjure up a specific bourgeois life"; rather, Kuenzli points to "the ways in which the artist obscures individual identity in order to make domestic life the basis of all-encompassing rhythms" (189). This fascinating line of thinking can be seen as sharing Michel Foucault's interest in pleasure as it dissolves boundaries between bodies. [1] Although Kuenzli does not pursue a Foucauldian analysis, Foucault's view of pleasure would dovetail perfectly with the Nabi aesthetic of sensuous interiors she describes.

The author's analysis of Nabi interiors leads her to state - tactfully but firmly - her philosophical differences from "recent historical analyses of the 1890s French home as a nervous mental chamber" (207). Kuenzli cites key critical texts from the period, as well as artists' statements and what we know of commissions such as the Vaquez project, to back up her assertion that Vuillard's panels tried to "lull the viewer into a pleasant state of reverie" (205). For Kuenzli, the intended viewer of Nabi work had attained a refined sensibility, not the neurosis described by Dr. Jean-Marie Charcot that has become the basis for the more medicalized interpretations of the interior put forward by Debora Silverman and Susan Sidlauskas. [2]

In a final chapter, Katherine Kuenzli explores some of the ways in which the Nabi idea of the decorative informed Henry van de Velde's design of Hohenhof, the Hagen home of patron and collector Karl Ernst Osthaus, as well as Henri Matisse's site-specific panels. In light of Kuenzli's reasoned reconstruction of Nabi interiors, it becomes easy to see the Nabi aesthetic as the basis for Matisse's idea of the decorative. The "reigning principles" of Nabi work, "whether intimacy, the decorative, or the Gesamtkunstwerk - fell out of favor in the 1930s," when these ideas smacked of totalitarianist uses of art (228).

The Nabis and Intimate Modernism reveals the difficult and also contradictory aspirations for a decorative modernism that would be transformative. Katherine Kuenzli's persuasive arguments and subtle research paint a picture of a fin-de-siècle moment when an art based on pleasure, and on a dreamlike fusion of viewer and work, could embody an aesthetic that was thoroughly modernist.