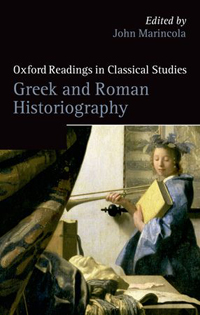 John Marincola's collection Oxford Readings in Classical Studies: Greek and Roman Historiography brings together fifteen articles on history-writing in the ancient world by a variety of scholars. Marincola notes in his Preface that he has selected the articles to concentrate on three particular areas. These areas are "the complex nature of constructing the past; the question of the extent to which ancient historiography concerned itself with historical truth (as we might understand that term); and the relationship between history and other genres, especially poetry" (v). The six contributions that were not originally written in English (the pieces by Loraux, Gehrke, von Ungern-Sternberg, Timpe, Canfora, and Funke) have been translated into that tongue for the anthology.

In terms of novelty, this collection boasts new addenda to nine of its articles, all of which are written by the original authors. In about half of these cases, these addenda are bibliographical reviews of subsequent scholarship, typically a paragraph or so in length. Terse as these are, they helpfully map later developments in scholarly thinking about these subjects. Timpe, Woodman, Canfora, and Funke also add substantive material to their original articles. These additions range from the making of new points to the marshalling of fresh data about the conclusions of the originals. In short, even those long familiar with the articles concerned will find something new in this collection.

In addition, Marincola himself contributes a thoughtful and perceptive Introduction (1-15). This explains his decision to put some distance between the ensuing collection and the long shadows of Felix Jacoby and Arnaldo Momigliano, whose absence is likewise justified in the preface (v, footnote 1). The decision is, in the view of this reviewer, a very sensible one, despite the eminence of the individuals concerned; the same goes for the more low-key avoidance of Sir Ronald Syme (3, footnote 7). Jacoby's rather dogmatic insistence on the generic structures of ancient historiography has not been his most helpful legacy, and the most enduring articles of Momigliano are easily accessible elsewhere.

Marincola also sets out how the fraught question of what history means in the modern world impacts upon the study of its classical counterpart. He manages this with a lucidity that not all previous treatments of the issues involved in assessing ancient historiography have consistently attained. This reviewer cannot easily think of a better introduction of similar length for those new to the issues involved.

With regard to the selection of articles, there is, again, little at which one could cavil. The addenda mentioned above give testimony to the enduring impact that many of these articles have had upon subsequent scholarship. It is, moreover, useful to gather these works together in one volume. The days of having to juggle Brunt's Studies in Greek History and Thought in one hand and Woodman's Rhetoric in Classical Historiography in the other will not be mourned by many undergraduates. Marincola also does a good job of selecting articles which are not too heavily slanted towards the study of any particular historian. This is a significant consideration for an Oxford Readings in Classical Studies volume since, as the editor himself acknowledges (v), this series is working its way through author-specific volumes anyway.

For the most part, the articles Marincola has selected here are not readily accessible from a few key-strokes at a computer by a user of moderate competence, which is a potential hazard for any such collection in these days of the Information Superhighway. That said, one might perhaps raise an eyebrow over the inclusion of Emilio Gabba's "True History and False History in Classical Antiquity" (337-61). Reservations here are not as to the quality of the work, but rather as to the actual gain in convenience which is made by putting the article in this collection. The Journal of Roman Studies is not hard to find on JSTOR, and this is not a contribution with an addendum.

In short, Oxford Readings in Classical Studies: Greek and Roman Historiography evades almost all the pitfalls to which anthologies of its kind are prone. It performs a useful service in bringing acknowledged classics of the subject together. It also adds enough that is new to justify any scholar in the area making its acquaintance.