Abdullahi A. Gallab: The First Islamic Republic. Development and Disintegration of Islamism in the Sudan, Aldershot: Ashgate 2008 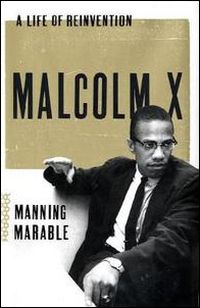 Manning Marable, the author of Malcolm X: a Life of Reinvention, was an outstanding historian, a prolific author and one of the most influential professors of African American history of our time. After working on this monumental biography for more than twenty years, he passed away only days before its publication. This book is the result of the work of tens of researchers who worked under the direction of Marable at the Malcolm X project at Columbia University since 2001.

The book sheds new lights on the life and the political activity of Malcolm X, who was mostly known to the public thanks to Alex Haley's Autobiography of Malcolm X, published in 1965, which rapidly became a worldwide bestseller. As a great expert on Malcolm X, Marable sensed that there was a hidden history beyond this autobiography, and he duly discovered that three chapters were missing from the original version of Haley's book. The chapters had been acquired by a Detroit attorney for 100,000 dollars in 1992 and Marable succeeded in reading the drafts for only few minutes. He soon realized that they represented - in the words of Marable - the "political testament of Malcolm X" (9). Marable began his research on Malcolm's life because he was convinced that the Autobiography, while an excellent narrative book, was not a complete and exhaustive biography of Malcolm Little. Most importantly, Malcolm died before having read the complete book, a fact which suggested to Marable that it may not represent Malcolm in exactly the manner he would have wanted.

The book is divided into seventeen chapters, which explore in chronological order unknown aspects of one of the most influential American activists of the Twentieth century. Some of these are in striking contrast with Malcolm's public image, such as his alleged homosexual relation with a white man during his gangster years, or the difficulties of his daily life with his wife Betty Shabbazz. As the title pre-announces, this book tells the life of Malcolm X through a series of reinventions, which are crucial to understanding his political activism, and present a unique insight into aspects of his personality. Marable has brought Malcolm's life back to a more human level, deconstructing the legend which the autobiography contributed to create after his death. Two of these reinventions are particularly significant: the first concerns his conversion to the Nation of Islam and his "becoming X", as Marable describes it, which marked the beginning of his new life as a spiritual and political mentor. The second is Malcom's trip to Mecca, the holy city of Islam, in 1963, which opened his mind and made him aware of a tolerant Islam.

The first part of the book is dedicated to his gangster life in Harlem, to the "Harlem Red years". It clearly emerges how Malcolm's early life was not exactly as it was depicted in the autobiography, where he tended to exaggerate his criminal activity in order to empathize the role of Elijah Mohammed in his salvation from a depraved life. Then, the chapters dedicated to the Nation of Islam certainly represents one of the most brilliant histories ever written of black Muslims in the US. In reconstructing the role of Malcolm in the NOI, Marable underlines that the 1959 three week trip to Egypt and Saudi Arabia, which is not addressed in the autobiography, represented a turning point in Malcolm's view of Islam. The author asserts that the journey marked the beginning of his private concerns over Elijah Mohammad's teachings and his reinterpretation of Islam. The Islamic shahada states that only Muhammad (died 632) is the final prophet of God, which as Marable points out, meant that Elijah's claim to be Allah's Messenger' would inevitably have to be questioned.

The most important and innovative part of the book is the one dedicated to the last year of Malcom's life, from his break with the Nation of Islam until his death on February 21th 1965. In the words of Manning Marable: "[Alex Haley] misinterpreted Malcolm's last frenetic year as an effort to gain respectability as an integrationist and liberal reformer, which was not an accurate or complete reading of him." (446) In Marable's book it emerges instead that Malcolm's last intellectual reinvention in 1964 was much closer to a revolutionary like Che Guevara, than to that of an integrationist champion. Since his broke with the Nation of Islam, Malcolm X was working on the creation of two groups: the Muslim Mosque Incorporated, which followed the teachings of orthodox Islam, and the Organization of African American Unity, which was a secular organization inspired by the Organization of African Unity. Manning Marable points out that from the moment of his departure from the NOI, Malcolm was trying to build a secular coalition which included both integrationist and nationalist groups interested in human rights for African American and Africans all over the world. He expressed the necessity of fighting within the United States and of bringing the Afro American quest for human rights in front of the United Nations to embarrass the US government in the eyes of the entire world. To internationalize the black American struggle was, in Marable's opinion, his major goal in the last period of his life.

Even if in 1964 Malcolm X occasionally supported desegregation tactics, a fact that led many historians to draw him closer to the civil rights movement and to Martin Luther King, Marable asserts that this is only historical revisionism. In Marable's opinion "this view is not only wrong but unfair to both Malcolm and Martin" (482): while King wanted to convince Americans that "race doesn't matter" and to erase the color line which relegated African Americans to second class citizenship, Malcolm "perceived African Americans as an oppressed nation within a nation and [...] he always thought first and foremost about blacks' interests". (483)

The book contains two revelations which deserve specific mention. The first is that Marable discovered that Alfred Balk, Haley's collaborator and co-author of a 1962 article on black Muslims, was exchanging information about Malcolm with the FBI. The second is in reference to Malcom X's assassination with Marable arguing that Willie Bradley "and possibly other Newark mosque members may have actively collaborated on the shooting with local law enforcement and/or the F.B.I.", (475) a statement which led to appeals from a group of journalists and civil rights activists for the case to be reopened.

This definitive biography of Malcolm X is an indispensable masterpiece for anyone interested in African American history and the black liberation movement. Although Marable occasionally goes too far with personal interpretations of some aspects of the life of Malcolm X, this book represents an important contribution to our understanding of one of the most influent political activists of the twentieth century.