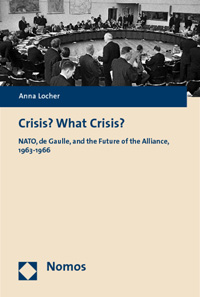 One of the most important developments in recent scholarship on the Cold War is a renewed appreciation for conflicts within the West. The last decade in particular has seen a variety of publications on the history of the European Community and NATO, and how tensions between Atlanticism and Europeanism may have played an even bigger role in shaping those communities than the allegedly apocalyptic conflict between East and West. Inspired by the work of such path breaking scholars as Frédéric Bozo and Piers Ludlow, historians have begun to examine the development of NATO and the EEC from a variety of perspectives, pursuing their research in multiple archives and multiple languages and opening the door to truly international history.

The dominant figure in such narratives is Charles de Gaulle, whose efforts to emphasize French independence led him to challenge the structures of both the European and Atlantic communities. Commanding the international stage for most of the 1960s, de Gaulle rejected plans for expanding the EEC or instituting majority voting, wanting to preserve and extend French leadership. Hoping to make an independent France a model for European liberation from American tutelage, he also withdrew France from NATO's integrated military command structure in 1966, expelling the alliance from French soil even as he insisted that France remain formally within the alliance. Although he never did succeed in creating the new Euro-American alliance he envisioned, his challenges to the status quo and the responses they inspired left an indelible mark on both the EEC and NATO.

In this revision of her 2006 Zurich dissertation, Anna Locher approaches the story of France's challenge to NATO from two creative perspectives. First, she embeds the dramatic story of France's 1966 withdrawal from NATO in a larger narrative beginning with de Gaulle's veto of British membership in the EEC in early 1963. For Locher, de Gaulle's NATO gambit was no surprise, but rather the culmination of a long process. That leads to her second feat of contextualization. By showing how France's allies recognized and began adapting to de Gaulle's policies well in advance, she demonstrates how the alliance was able not only to survive the 1966 crisis but also to emerge as a stronger more self confident alliance, leading to the Harmel exercise in 1967. In those crucial years, Locher argues, the Alliance began a process of self-examination that made it better able to face the future. As she concludes, "After France had announced its retreat from NATO's military branch, Western governments and NATO officials could properly start to adapt NATO to an era characterized by détente." (280)

Locher succeeds in her task by focusing not only on the usual main actors - the US, Britain, West Germany, and France - but by highlighting the role played by NATO's smaller members. Canada, Belgium, and the Netherlands in particular are shown to be active and creative actors in the negotiations of the early 1960s. Locher also makes extensive use of the NATO archives, tracing the roles played by the alliance's committees and organizations, as well as by prominent leaders such as Secretaries General Dirk Stikker and Paul-Henri Spaak, and the various permanent representatives of the member states. Locher thus offers a history of NATO as an alliance, rather than a mere extension of bilateral relations between the United States and its European allies. In Locher's telling, the French withdrawal was a crisis long foretold, with de Gaulle's actual move happening almost as an afterthought in the book's last twenty pages, after a section that asserts the alliance was "Back on Track."

As a representative of the newer generation of scholars contributing to Cold War history, Locher deserves credit for her willingness and ability to work in a variety of archives, as well as her admirable familiarity with the recent scholarship on European-American relations. Her multilateral perspective helps highlight the role of the smaller members of the alliance and enriches her narrative. This is true multiarchival international history such as scholars have been advocating for years, and will find a place in the libraries of students and scholars of transatlantic relations and the Cold War.

The one criticism worth considering about the book (outside of the minor irritation of its lack of an index) is that, while providing even more transnational details about the crisis, Locher essentially drains it of drama. If de Gaulle's challenge only made NATO stronger, then one is left to wonder whether it was much of a challenge at all. Perhaps all the worry and bluster was overblown. It is certainly tempting to make such an argument, and Locher comes very close to doing so. Her conclusions claim that the multiarchival work helps us to understand "how the Atlantic alliance cleared the hurdle toward a reassured and newly invigorated NATO in 1966." (292) Locher's story thus has a happy ending for the alliance.

If all this new research and extensive archival work only leads to that sunny conclusion, however, I fear that we are missing something. This is not a direct problem for Locher's solid contribution to the literature, but should give scholars pause as we consider future work. Anyone who studies the contemporary Atlantic world cannot avoid noticing that it is still haunted by the problems of the 1960s. Europeans and Americans still haggle over the meaning of consultation, as well as about the proper relationship between the Atlantic Alliance and European integration. The relative weight of the member states in decision-making and the physical contributions of the different members to alliance activities have troubled alliance work from Bosnia to Afghanistan to Libya. How is it possible that an alliance that was "back on track" in 1965 nonetheless continues to struggle to define its international role nearly five decades later? Certainly the end of the Cold War created special challenges of its own. But even during the Cold War, NATO members both recognized and evaded these problems, leaving them for future generations to solve. We are still waiting.

Locher's work accomplishes well what she seeks to accomplish, focusing on the immediate crisis years and offering a valuable model for future multiarchival and multilateral research. Nevertheless, scholars have a long way to go in trying to understand either the present or the future of the alliance.