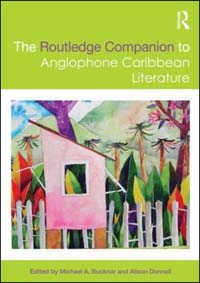 This hefty volume appears in Routledge's acclaimed companion series, and comprises 68 essays which were written both by established authorities in the field and emerging scholars. As the editors announce, the unifying concern of the contributions is to debate the politics of Caribbean literary history. In particular, they seek to engage with the key "contestations and controversies" that have informed critical practice and theory in the anglophone Caribbean (xxv). The companion is divided into six parts: Caribbean Poetics, Critical Generations, Textual Turning Points, Literary Genres and Critical Approaches, Caribbean Literature and, finally, Dissemination and Material Textuality.

The first section consists of sketches of largely canonical Caribbean authors which aim to trace their poetics, that is, their aesthetic-political programme. To this end, the majority of the essays in this section contextualise the literary works predominantly with the authors' own comments, be they critical essays or interviews. This tendency is particularly pronounced in Sandra Pouchet Paquet's essay on George Lamming's "Revolutionary Poetics," Edward Baugh's meditations on "Derek Walcott: On Being a Caribbean Poet" and Mark McWatt's reflections on "The Language of the Imagination" of Wilson Harris. Thus, they firmly subscribe to the debatable hermeneutic premise that the author's interviews and "critical essays cast light on his fictions" (37); an approach that risks resurrecting the flawed and long-dead notion of the author's true intention. Moreover, McWatt's essay reads less like a critique and more like a homage to the genius of Lamming, his "surprising consistency and integrity of vision, language and purpose" (34).

Some essays, however, provide a clear critical thesis, lucidly elaborated. Alexis Pauline Gumbs's assertion of what she - rather intimidatingly - terms Dionne Brand's "diasporic domestic radicalism" (4) is convincingly illustrated in her essay: Brand deconstructs and exposes the violence and traumata inherent in the notion of 'home' and 'domesticity' in a Caribbean diasporic context, while at the same time she invests the notion of disaporic 'homelessness' with a radically revolutionary agenda.

Section two, "Critical Generations," provides an informative and concise survey of Caribbean literary criticism and its concerns from the early twentieth-century to the present. However, in places more historical contextualisation would have been helpful, as well as a little less jargon. For instance, the opening paragraph of Norval Edwards' essay on "The Foundational Generation" contains several long-winded sentences that contain a volley of jargonistic nouns. One wonders for example what is meant by vague phrases such as "race and language as consanguineous figures of history and nation" (111).

The following section, "Textual Turning Points," is very heterogenous. It comprises essays on diverse topics, such as British colonial narratives of the Caribbean, the emergence of the Caribbean diaspora novel in the USA, in Canada and Great Britain, on a Caribbean ecopoetics (i.e. the poetics of place and landscape) in Lamming, Harris and Naipaul, the foundation of a Caribbean theatre, as well as investigations of female and/or feminist literary interventions. Most authors in this section make the case that their objects of enquiry merit the status of textual turning points. For instance Evelyn O'Callaghan argues convincingly that the colonist narratives mark an important intertextual foil that postmodern Caribbean novelists, such as Caryl Philipps, exploit for their ideologically opposed re-writings. Carolyn Allen in her contribution on the emergence of a Caribbean theatre problematises the notion of the primacy of the textual in theatre, as she discusses the impact of the social-politically charged performances by the feminist theatre collective Sistren. However, with some essay such as Lorna Burn's Glissant informed comparison of the "prophetic visions" in Walcott's poem Another Life and Braithwaite's The Arrivants the readers is left wondering why these texts mark textual turning points?

The section on literary genres and theories explores how European genres and theories have been adapted and transformed for use in the Caribbean literary context. For instance, Glyne A. Griffith illustrates that Western Marxism was unorthodoxically altered to suit the anti-colonial, anti-imperialist and antiracist agenda of left-wing Caribbean intellectuals and writers. Other performative genres beyond the text are also considered, including dub poetry.

The penultimate section is concerned with the relationship between Caribbean literature and its relationship to various key concepts, such as the canon, ethnicity, race, gender/sexuality, migration, etc. The whole section consists of contrasting standpoints by two contributors that discuss these subjects; an innovative approach that helps to stimulate further debate with the reader. For instance, it works very well that Leah Rosenberg's critique of the male-dominated Caribbean canon, which excludes early women's writing, is followed by Kenneth Ramachand's denial that such a canon exists. However, the non-literary dimensions of the key terms sometimes receive short shrift in both contributions, for instance, in Alison Donnell's and Dania Dwyer's texts on Caribbean literature's relation to totalising History. Claiming an empowering recovery of history solely for literature risks ignoring the extremely valuable work done by cultural and social historians to recover the histories of the marginalised in the Caribbean. The dangers of a 'literary' approach also become visible in the subsection on popular culture. There, Idara Hippolyte analyses and effectively ennobles the glorification of violence in Jamaican dancehall by drawing on theories of the French philosopher Baudrillard, the American literary theorist Jameson as well as Nietzsche's concept of the Übermensch.

This companion offers a wealth of different perspectives on various aspects of anglophone Caribbean literature. Due to the varying quality of the individual essays, however, less might have been more. This would have also allowed for more engagement with the socio-historical and political contexts which have formed the preconditions for Caribbean literature to emerge.