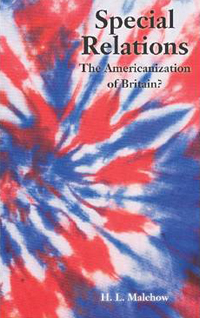 This book seeks to explore how the United States shaped post-1945 British society, politics and culture. It is one of the first contributions to embed contemporary British political, social and cultural history systematically and consistently within a transnational and transatlantic framework. Instead of relying on simplistic notions of hegemonic "Americanisation", or an individualist and "authentic" appropriation of cultural forms, Howard Malchow argues for a middle way. He combines attention towards the importance of American popular culture as a reference point in the Cold War with a focus on the agency of those who appropriated it. He therefore has many interesting things to say about the notion of allegedly "authentic" British popular and protest cultures in the 1960s and 1970s and discusses with admirable clarity and lucidity how visions of "America" were themselves a product of such processes of appropriation.

In short, this book highlights how "America" became a source for contestations in British popular culture and politics and emphasises how even the critical assessments that developed during these discussions were not manifestations of "anti-Americanism", but a continuation of American forms of modernity. Malchow follows this theme in four sections, starting with the import of modernist architecture from the United States to London and the symbolic and real contestations for which this architecture became a key reference point: moving from the new building for the London Hilton hotel towards the new and imposing US embassy building on Grosvenor Square, Malchow literally sets the scene for his transnationally informed analysis of the anti-Vietnam and student protests of the 1960s.

The second part discusses American influences on British counterculture and includes a fascinating section on American influences on the London underground press. The book's third section analyses the consequences of these renderings of American modernity in Britain and tackles the ways in which these processes provided the conditions of possibility for three "liberation movements" (Anglo-American African Americans; feminism and gay liberation), highlighting the ways in which protesters appropriated ideas of "freedom" and thus both reproduced and subverted hegemonic Cold War discourses of "American freedom vs. Socialist dictatorships".

The book's fourth part explores the transformation of these themes during the 1980s. Here, Malchow's passages on the selling of British "heritage" to US consumers is especially impressive. He can show how Britain sold Americanised versions of its own society back to the United States and was thus able to see how American consumers regarded this as authentic representations of British popular culture. Transnational relations thus operated like a mirror that allowed the two societies to observe each other as "authentic" - they generated knowledge about themselves by looking abroad to others and observing these observations.

Surprising as it may sound, given the state of research on protest movements and popular culture for continental European countries and given the mythical status of the Anglo-American relationship in British foreign policy, this book is the first solid historical account to examine the transnational connections and cultural representations that undergirded this relationship. Malchow has produced an intelligent and pathbreaking contribution to British contemporary history that impresses through the detailed and rigorous engagement with both published and unpublished primary source material. Malchow eschews the now fashionable yet rather facile reliance on media discourses that has become so prominent in more recent studies on contemporary British history produced by British historians. This move enables him to probe more precisely and convincingly processes of social and cultural change. His study impresses through its range of learning and conceptual engagement that combines attention to cultural studies with an eye for the dynamics of politics and is firmly grounded in painstaking archival research. Through its concentration on London as the key "postwar locus of British modernity" (6), the book somewhat neglects provincial renderings of the engagement with American popular culture, such as the folk revival, in the north of England. But this small lacuna cannot detract from the fact Malchow has truly broken new ground with his book. It will serve as a conceptual and empirical model of scholarship on post-1945 British popular culture in the context of exploring transatlantic modernities. It is also currently the best reference point for research on the history of counter-cultural movements in Britain in the 1960s and 1970s. It can also be read with great profit by those interested in processes of "Americanisation" and transnational history.