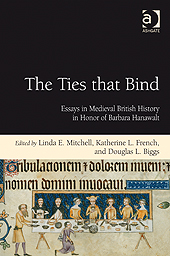 This collection of twelve relatively short essays is a Festschrift for Barbara A. Hanawalt, emerita George III Professor of British Studies at Ohio State University. The volume includes a list of her publications - five monographs, nine edited books, and over fifty articles - and a short introduction that discusses her life and work. The essays are written by her former doctoral students, colleagues and friends, including the three editors. As with Hanawalt's own work, the essays focus on late medieval England. They also reflect her range of interests - although half of the essays discuss women (including noble and religious women) - and the different approaches she has employed. According to the editors, the volume falls into two parts: "The first six pieces develop their studies through sophisticated mining of sources that invoke social historical methodologies, statistical analysis, and prosopography [...]. The six essays in the second half of the volume focus on single subjects or develop composite portraits through both creative and inventive treatments of sources and the re-evaluation of commonly used texts" (4-5).

The first three essays explore aspects of urban economic and socio-political culture. Jonathan Good discusses "alien" clothworkers in London and their conflicts with "native" clothworkers, including the well-known attack on the Flemings during the Great Revolt of 1381. Susan Duxbury assesses Southampton's inland trade in wine in the fifteenth century. Benjamin McRee examines the role of the mayor in fifteenth-century Norwich, particularly in the managing of political controversy and conflict.

Janet Loengard's essay on thirteenth-century women in the king's courts is the first of six essays on medieval women. She analyses the women listed as plaintiffs or defendants in the edited Curia Regis Rolls for 1242-5 (in about 1,740 entries, more than 800 mention a woman as a party). Loengard concludes that women knew about their property rights and were active in enforcing them. Indeed, she contends that the middle of the thirteenth century may have been a high point for such rights.

Susan Steuer's essay on vowesses is the only other one to look at women as a group rather than focussing on named individuals (they are positioned either side of Joel Rosenthal's essay on the mobility of bishops between dioceses). Steuer maintains that widows documented as vowesses, women who had taken a vow of chastity but were not enclosed, are "only the proverbial tip of the iceberg" (102). Besides the women recorded in the registers of archbishops and bishops and the records of archdeaconries and peculiar jurisdictions, she argues that women identified as "pure widows" in charters and wills should also be understood to be vowesses "through strong circumstantial evidence" (97). The phrases she is referring to include "pura viduitate mea" and "propria viduitate mea". Steuer has some convincing examples that this was the case but it would have strengthened her argument if she could also explain similar formulations such as "in mea libera potestate et virginitate". [1]

One of Steuer's examples, Margery Kempe, is also the subject of another essay: Katherine French reassesses the Book of Margery Kempe by focussing on Margery's relationship to her parish church. French argues that two stories about her parish - one about how a political faction tried to gain liturgical rights for Lynn's two chapels and one about how her parish church was miraculously saved from a fire - roughly divide the first, longer book into thirds giving it a thematic coherence that others have claimed the Book lacks: "In the first third, Margery tries to change her identity from a frivolous parish woman to a spiritually led one. The middle third covers her travels [...]. She visits other parishes, but is an outsider [...]. In the final third [...] Margery works to become an accepted parish member, but only of the parish as religious forum, not a political one" (163-4).

Laura Michele Diener also offers an essay on a religious woman: the unnamed sister of Aelred of Rievaulx to whom he offered his treatise, De Institutione Inclusarum. Diener concludes that the sister did exist but, despite her best efforts to read the sister into the text, that what the Rule demonstrates "is how a religious man viewed the ideal experiences of a holy virgin" (119).

Linda Mitchell and Douglas Biggs are more successful in their attempts to reconstruct the lives of individual women as the aristocratic women under discussion can be found in various public documents: Countesses of Norfolk Maud Marshal (c.1192-1248) and Margaret Marshal (c.1321-99), and Lady Margaret Sarnesfield (c.1381-1444). Mitchell, like Loengard, maintains that women's legal rights to property weakened between 1245 and 1345 but she also finds that Margaret Marshal was just as adept as her great-great-grandmother Maud at forging sophisticated strategic alliances to secure the futures of her children and grandchildren.

The final two essays turn to peasant societies. Anne DeWindt tells the story of the Great Revolt of 1381 - which featured in the first essay - from the perspective of the Berenger family of Warboys, tenants of the Abbot of Ramsey. It is based both on the surviving evidence, which might have reached the ears of Berengers in some form, and on "informed speculation" (178). It succeeds in personalizing the grand narratives of the revolt, demonstrates that the revolt did matter after all, and could be profitably assigned to undergraduate students.

Madonna Hettinger seeks to evoke the personal impact of the Black Death on peasant survivors, by means of a method controversially trialled by Barbara Hanawalt in her Growing Up in Medieval London, that of the composite portrait. The sources used include literary sources from urban eyewitnesses, monastic records, royal letters, and two letters written during the 1904 epidemic of bubonic plague in China that Hettinger found in her College's Special Collections Department. Together the information enables Hettinger to write a father's account of his son's death from plague in 1349.

The collection as a whole is a fitting tribute to the wide-ranging scholarship of Barbara Hanawalt. Students of medieval society will find in it a variety of approaches and a demonstration of the vitality of this field.