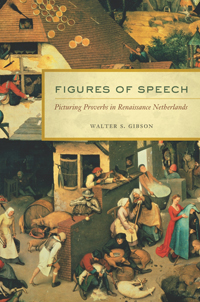 "Figures of Speech" articulates and explores the pervasiveness of proverb imagery in Renaissance Netherlands. The book consists of three case studies: a discussion of Bosch's Haywain triptych and its afterlife; a study of a suite of prints by Jan Wierix known as the Twelve Proverbs; and a chronicle of the pictorial theme of the Battle for the Breeches. The conclusion focuses on Pieter Bruegel's Netherlandish Proverbs (1559, Berlin). The author tackles three large-scale questions, posed in the preface: "Why were proverb images so immensely popular in these centuries? Did the depiction of proverbs change over time, and if so, how? And why did some proverbs, to the exclusion of others, find such favor with the picture- and print-buying public?" (XIII).

Quoting Erasmus and a host of other authorities, Gibson underscores the lability of the proverb. Storehouses of wisdom and ornaments of rhetorical persuasion, proverbs were Aristotle's tool of "ancient witnesses, poets and all other persons whose judgments are known to all." [1] Conversely, people "are delighted when a general statement of the speaker hits those opinions which they hold in a particular case." [2] Erasmus, compiler of the famous "Adages", emphasized their fungibility of form: "Almost all figures", he wrote, "like the expression 'willy-nilly' (nolens volens), are proverbial" (10).

The main strength of the book is the author's deft assembly of appropriate sources. For example, Chapter Five humorously chronicles the portrayal of the theme of the seven women battling for breeches - a subject with scriptural roots in Isaiah 4:1 (a "verse with a notorious career in the visual arts - one that would surely have dismayed the prophet himself" (38)) - in popular carnival plays, prints, and pilgrimage badges. Gibson emphasizes the sexual humor of sixteenth-century depictions. He draws a novel connection between a print of the subject by Marten de Vos and a famous relief sculpture of the phallic pagan God Semini (Priapus) still visible today above the archway of the Antwerp prison - an old, powerful, stone- and brick- institution near the river. Described as "easy to recognize" by the Spanish historian Calvete de Estrella, the bas-relief was appealed to by Antwerp's women, especially against infertility (Antwerp's inhabitants referred to themselves as "children of Semini"). Gibson introduces a new reference to the prison relief, hitherto unnoticed, in a mock New Year's prognostication published in Antwerp in 1561. It invokes the sculpture to inform readers that "Venus will be in the environs of the house of Priapus, and Mars will have no domination, a planetary conjunction favoring love, not war" (133). The chapter reveals the multi-generic, cross-discursive, and hybrid nature of pictorial proverbs. A mass cultural form drawing on both high and low references, pictorial proverbs were a crucial dialogic space, composed from a wide range of verbal and visual narratives.

In the last chapter, Gibson returns to the questions posed at the outset. He offers a host of explanations for the flowering of proverb images in the Low Countries, including the success of Erasmus' "Adages". Ultimately, he concludes that the passion for proverbs, "may owe much to a fortuitous conjunction [...] of the "linguistic nationalism" of the period [...] coupled with the emergence of Antwerp as a center of art production catering to an international market" (145). (Regrettably, Elizabeth Honig's subtle book on this subject does not appear in the bibliography). [3]

"Figures of Speech" explores the "reasons" for the fascination with proverb pictures in the sixteenth-century Low Countries (the "why"). The book might also have analyzed the interaction between the aesthetic and economic realms (the "how"). The freewheeling power of proverbs to address the "dichotomy" between form and matter - making them expressions of ethical freedom - is invoked, but the author gives little space to figuration and instrumentality, topics explored by Mark Meadow in his book on Bruegel's Netherlandish Proverbs. Meadow's early analogy between the formal patterns of Bruegel's painting and the structure of commonplace books highlighted relations between the visible and the legible. [4] While Gibson is attentive to theology in the chapter on Bosch's Haywain, his admonitory reading of the triptych misses the point about the participation of the economic in art discourse, or the significance of classes of property and transitory goods. The book, in general, leaves material and technical issues unexplored, such as relations between the reproducible, often serial production of proverb pictures and their authority and efficacy.

Numismatic and divine categories lay at the heart of representation. [5] Jesus spoke in parables to hide and reveal truth at the same time, a stance, rhetorically and logically problematic, that orators tested with hilarious results. Pieter Bruegel, scientist, mathematician, painter, and orator, interrogated the relationship between sacred and secular - between God's realm and Caesar's realm - with deep irony (especially in his political cartoon-fabric painting, The Parable of the Blind of 1568). But "Figures of Speech" is a traditional cultural-historical and iconographical survey, not a book about measure. In three rich case studies, the author, sage witness of Bruegel scholars, subtly weaves together a wide range of fascinating sources and images that attest to the mass appeal of "speaking deeds" (145) in the sixteenth-century Low Countries.