Stéphane Benoist (ed.): Rome, a City and its Empire in Perspective 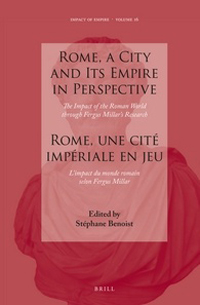 This oddly titled collection of essays, based on a colloquium held at the University of Lille 3 in 2010, pays tribute to the work of Sir Fergus Millar. Edited by Stéphane Benoist, who also contributes a short introduction that surveys Millar's career (in laudatory terms), the volume stands as a modest but eloquent testimony to the deep influence of Millar's published scholarship over the last fifty years.

The chapters are arranged in roughly chronological order. There are two chapters on the Roman Republic (by Fr&#233déric Hurlet and Francisco Pina Polo); one on the Hellenistic world (John Ma); two on the Roman empire (Peter Eich and Clifford Ando); one on the later Roman empire (Philippe Blaudeau); and two on the culture of the Roman and late Roman Near East (Fergus Millar and Jean-Baptiste Yon). Organized in this way, the essays effectively illustrate the broad sweep of Millar's research interests.

The stated purpose of the volume is "to deal with the main aspects of Millar's research, its reception and the reactions it has raised, and to propose surveys about current inquiries, as well as perspectives for future studies" (vii). Given its brevity (under 200 pages of text), and the fact that individual authors have interpreted their assignment in very different ways, the volume can only deliver an impressionistic and somewhat disjointed picture of Millar's work and the research avenues it has opened up. In assessing the volume as a whole, then, it is best to consider the essays not in order, but rather in terms of how they approach their subject.

Hurlet, Eich, and Yon each provide systematic overviews of different aspects of Millar's scholarship, not only highlighting key features of the work, but also discussing critical responses to it. Hurlet examines Millar's series of studies on the "democratic" character of the Roman Republic, emphasizing the central role of formal institutions in Millar's conception of Republican politics, and stressing his interest in the subject of "publicity." After summarizing the views of Millar's principle critics, especially Karl-Joachim Hölkeskamp, he then weighs in himself on the ongoing debate over the nature of Republican politics, concluding that Millar's diachronic analysis of Republican institutions has been salutary, but cautioning that the term "democracy" may be misleading in this context. Eich analyzes the "petition-and-response" model that lay at the heart of The Emperor in the Roman World (1977), situating Millar's views on the Roman empire in the context of sociological research on other premodern states, and arguing, against Millar's critics (especially Jochen Bleicken), that "petition-and-response" is still the best way to conceptualize Roman imperial administration. Ever so slightly more critical of Millar's methods and conclusions is Yon, who tackles the problem of culture and identity in the late- and post-Roman Near East. Suggesting that Millar both focuses on and privileges certain kinds of evidence, especially verbal expressions in official contexts, and also adopts a particularly Roman perspective on the geography of the region, Yon offers four case-studies of linguistic usage in the Near East (at Palmyra, Umm al-Jimal, Samra, and Zoara), arguing from funerary epigraphy that the relationship between languages, religious identities, and local cultures in this area is even more complex than scholars have recognized.

Millar's own chapter is a brief report on a work in progress on the Roman Near East after Constantine, a sequel to his The Roman Near East (1993). He draws attention to the imperial and ecclesiastical administrative structures of the region; the complicated relationship between Judaism and Christianity during this period; the interplay of languages in the Near East, especially Greek and Aramaic; and the rise of Syriac as a Christian language, "the most profound question which confronts the historian of the period" (133). Though Millar stresses that he is not writing an "overall" or "integrated" history of the post-Constantinian Near East, there can be little doubt that the work will be a major contribution to our understanding of this crucial period.

Like Hurlet, Eich, and Yon, Blaudeau sets out to investigate one strand of Millar's research, in this case his analysis of fifth- and sixth-century church councils in his 2006 monograph, A Greek Roman Empire. He does not attempt a critical review of the work and scholarly reactions to it (it is perhaps too soon for that), however, but instead offers an appreciation of Millar's achievement. In particular, he shows how Millar's historical arguments are often based on his great sensitivity to language and to the dynamics of textual production and communications in the later Roman empire.

The chapters by Ma, on Elias Bikerman's Institutions des Séleucides (1938), and by Ando, on Greek conceptions of the Roman city, are more or less free-standing essays, relevant to the volume as a whole only insofar as both deal with subjects of longstanding interest to Millar. Ma demonstrates the continuing relevance of Bikerman's magnum opus, applauding his astute analyses of the Seleucid state, royal power, and king-community interactions, but argues that the Maccabean revolt of the 160s BCE should not be seen primarily in terms of local initiatives, as Bikerman claimed; instead, according to Ma, the uprising was the result of centralized, top-down pressures, mostly administrative in nature, under Antiochus IV. Ando's essay is a preliminary study for part of a work in progress on Roman imperial government. Through a close reading of several passages in Strabo, he shows that Greeks struggled to perceive the nature of the Roman city, especially with respect to the relationship between certain administrative arrangements (in particular, attribution) and processes of acculturation.

Finally, there is Pina Polo's chapter on contiones. It is, in effect, a concise summary of his important earlier work on the topic, which notes along the way how central public oratory has been to Millar's view of Republican politics.

As will be clear from this short review, there is something of a "hodge-podge" quality to the volume as a whole. Nevertheless, at least three key themes emerge. First, we are reminded of Millar's sustained interest in public institutions, from the voting assemblies of the Roman Republic to the church councils of late antiquity. Second, we are invited to appreciate Millar's fundamental work on official communications as a central feature of administrative apparatuses, both imperial and ecclesiastical. And third, we gain a valuable perspective on Millar's many insights into the convergence of language, culture, religion, and identity in the ancient Mediterranean world, especially in its eastern half (broadly defined). In these regards, the volume is indeed a fitting tribute to a senior scholar whose path-breaking work continues to stimulate the field.