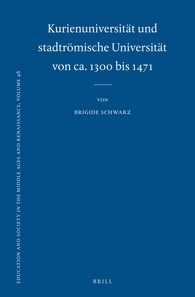 In Kurienuniversität und stadtrömische Universität, Brigide Schwarz takes on two major tasks. First, she seeks to open up new paths for future research through a wide-ranging, systematic analysis of the relevant sources. Second, she seeks to provide a basic outline and description of curial and city universities in their various locations and iterations (290).

Despite the complexity of the tasks and the paucity of secondary literature to draw on, Schwarz's work is a remarkable success. Indeed it is difficult to imagine another author capable of executing such a task. Through decades of work on the Repertorium Germanicum Schwarz has developed an extraordinary familiarity with the content, form, and conventions of the documents emanating from the Curia. This intimate knowledge of the sources allows her to draw compelling conclusions from the often-sparse evidence illuminating the "dark centuries" of both the Roman and curial universities (421).

After a historiographical overview, in which she characterizes the state of current research as "meager" (1), Schwarz discusses her approach to the sources, most notably the papal supplication registers and the Repertorium Germanicum. These sources allow Schwarz to shed new light on the structure and history of the universities. Schwarz also uses them to piece together prosopographical registers containing the names and brief biographies of more than six hundred faculty and students associated with the curial and civic universities.

Schwarz divides the remaining work into five main sections of dramatically unequal lengths. Part A provides a historical overview of the curial universities and the Roman civic university. She also briefly discusses the relationship between the curial university in Avignon and the Avignon civic university. In this section, Schwarz outlines the effects of the relocation to Avignon, the Great Schism, the Councils, and the two main periods of papal itinerancy during the reigns of Clement V (d. 1314) and Eugenius IV (d. 1447). In this section, Schwarz goes beyond the two main geographical centers (Rome and Avignon), and includes the temporary host cities of Florence, Bologna, Ferrara and Siena. By extending her field of vision Schwarz increases the evidentiary base of her study and provides important opportunities for comparison.

In the next sections, Schwarz departs from the chronological format of Part A and examines the universities' institutional structures, finances, faculties, students, privileges, and curricula. Here Schwarz assesses the importance of the mendicant studia and discusses the institutional connections between the two universities, especially after 1423. Through her prosopographical registers, Schwarz demonstrates that many of those promoted at the curia received much of their education elsewhere. This observation allows her to draw two important conclusions: first, the curia was often used as a cheaper alternative to promotion at one of the more prestigious institutions; second, that curial promotions seem to have been subject to abuse less often than assumed by contemporary polemicists, or for that matter many recent historians.

With the exception of Part D, which is an English summary of the text's key findings, the remaining sections explore the evidentiary bases of the first two sections more fully. In order to sustain the "main thread of the narrative" (290), Part C embarks on a series of excursus which she was unable to weave into the main body of the work. Although the structure is awkward and requires the reader to flip back frequently to earlier sections, the payoff is worth the effort. Here Schwarz takes on seven narrowly focused questions. Perhaps most compelling is her masterful analysis of Boniface VIII's "foundation" document. Here she is most in her element, teasing compelling insights from complicated sources. The final section includes editions of eighteen key documents discussed at length in the text, as well as three valuable prosopographical registers. These biographies in many ways form the backbone of the work and may well represent its most important contribution. They certainly challenge the often repeated assertion that the curial university was "très marginal" (15).

Although Kurienuniversität und Stadtrömischeuniversität is at times frustrating to navigate, the sheer volume of scholarship and new material Schwarz brings to light more than compensates for this inconvenience. I have no doubt that this work will become a standard reference, not only for scholars of the Roman and curial universities, but for all scholars of medieval and early modern universities. In her concluding remarks, Schwarz notes that at times she felt as though she was "clearing a path through rough terrain for the first time" (450). Those who follow her will encounter a landscape whose contours are now better understood and more easily explored.