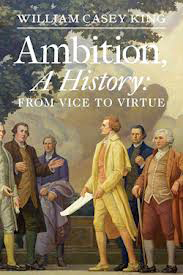 Americans seem to have appropriated ambition as a defining, positive trait, potentially leading to personal, and collective, greatness. Some would say it is as American, and as good, as apple pie. But this was surely not always so. What is the history behind this American story? Instead of presenting the reader with an example of American exceptionalism, William Casey King looks for the defining characteristics of ambition in the past, before the Declaration of Independence, and in its European roots, in antiquity and in early-modern England and its burgeoning empire. This proposes to be an ambitious book. King's goal is to trace ambition, its twists and turns, from early-modern England to the nineteenth-century U.S. He strives for a nuanced approach, one that includes dominant views of ambition alongside older and newer, less influential, conceptions of it. Borrowing from literary critic Raymond Williams, King terms these "dominant, residual and emergent" and acknowledges that "One can find suggestions that ambition is good when the dominant ideology proclaims it sin, just as one can find evidence that ambition is sin, or vice, at a time when it is celebrated." (46) In this approach, he would receive a nod of approval from the emerging field of the history of emotions, which seeks to historicize particular emotions, to show how they change over time and how they impact changes in society, politics and other spheres of human endeavour and thought. Indeed, the author would have benefited from important interventions in the history of emotions to make this argument. Sometimes identified as a "concept", an "ideology" and sometimes as a "passion" (94), it is unclear how these varied terms play into the historicity of ambition.

Chapter 1 wisely begins with the influential ancient Greek and Roman writers and political figures who are not often enough acknowledged to have had an impact on early-modern and modern elites. Plato, Aristotle, Livy, Seneca, Cicero, Cato and Catiline are taken in turn and shown to have had remarkable consistency in their model of ambition tied to rebellion and vice, as filtered through Medieval and Renaissance understandings of these classical texts. This filtering, through Christian texts like those by Augustine and Thomas Aquinas, is responsible for the transition of ambition from secular vice to Christian sin.

Chapter 2 explores ambition as sin more pointedly through the lens of English Elizabethan and Jacobean culture, both "high" and "low". The reader learns that ambition as sin was the dominant ideology of the 16th and early 17th centuries (46), to the extent that this version became state policy in early-modern England. Rather implausibly, the author separates religion from culture and declares them to be two distinct "sites" in order to prove his argument about the hegemony of ambition as sin (47). Ambition is dangerous for Shakespeare (78) and for Ben Jonson (76) it has "destructive and damning potential". Stephen Greenblatt's "subversion-entertainment paradigm" (79) is repeatedly applied in this section.

Chapter 3 argues that by the seventeenth century, ambition was viewed with greater ambiguity, and perhaps even an acceptance of its inevitability. For Francis Bacon, ambition might be good, (95) yet in Bacon's On Ambition, it is not seen as potentially positive but rather as a "fundamental threat to the stability and health of the state" (114). In reference to Bacon, the link between ambition and the passions is made. Bacon correlated humoral imbalance, the plague and the passions (107). He was also the originator of the idea of countervailing passions. This is explained in the context of the plague, where passion had to be pitted against passion; disease against disease (96). "The secret of virtue of sympathy and antipathy" is introduced here and repeated on page 107. King sees the beginnings of a challenge to ambition as pure sin in the idea of countervailing passions (94), which would manifest most fully later in the American system of government, especially with reference to James Madison's idea of countervailing passions in Federalist No. 51 that "ambition must be made to counteract ambition" (109). King points out that Bacon provides examples of ambitious men curbing other men's ambition (116). Ambition, no longer a sin, but rather a two-headed passion, presents the possibility of a "noble" ambition, depending on the ends to which it is applied (117-8).

Chapter 4 extends the idea of ambition as a potentially positive trait, and how it was harnessed as a virtue for British imperial ends. Spanish imperial policy was the model here. King argues that this harnessing became official state policy in England, where "what was once a sin had become a virtuous vice" (167). King is right to focus not only on state policy or imperial rivalry, but also on the othering of the indigenous populations the explorers and settlers encountered in the New World. Indigenous peoples were variously perceived to have been in a "golden age where ambition was not known" (164) before contact, and therefore idealized as simpler and closer to nature, while these same traits were also used by the newcomers as proof of indigenous inferiority and used as justification for often brutally usurping lands and power structures.

The Epilogue ties this varied trajectory of ambition to the American Revolution. Ambition as sin is still apparent, King argues, in the substantial rewrites of the Declaration of Independence. This chapter finally presents us with what is billed as the main argument of the book. After Independence, ambition needed to be redefined because otherwise Independence itself would have been perceived as sin (186). Thomas Paine's idea that monarchy is more profoundly evil than ambition is handy here (186). As King concludes, this is finally a "full and explicit rejection of ambition as sin", permitting a radical redefinition of ambition as republican virtue (187). Finally we get to the roots of the nineteenth-century view of ambition, but here King is careful to point out that this view was reserved for "self-made men", for small groups of white men only. Excluded were the vast majority of the U.S. population: women, racial and economic minorities. It would be interesting to trace a history of ambition among these "non-ambitious" "others". To what extent did women, African Americans, non-privileged people define ambition within their own communities and did this change over time? Could this perhaps be a case of the dominant concept of ambition masking other forms?

One rather grating point for international readers is the author's frequent appeal to a U.S. readership only. "Our founding", "our" selves (10), "our nation" (170), "we know the words of our scripture" [the Declaration of Independence] (171), referring to London's South Bank as the early-modern Las Vegas (51) and ambition in early-modern England being an epithet like "red" in the United States, are some examples of this rhetorical exclusiveness. This is oddly in sharp contrast to the actual content of the book, which is mostly English in focus. Sometimes it reads like a travel guide to London for the American tourist, especially in chapter 2. There is quite a bit of repetition in this book, as well as the use of theoretical underpinnings, which are sometimes overused in one section and dropped altogether in the rest.

For most of the book, ambition is a vice or a sin. Only in the last chapter and the Epilogue does the reader come to understand the transition of the concept from 'vice to virtue', which seems a shame since the thrust of the book promises to be the transformation of the concept within the American framework of independence and its elevation to a distinctly American virtue in the nineteenth and twentieth centuries. The approach of this book should appeal to a wide scholarly audience interested in the history of ideas (and obliquely, the history of emotions). Instead an American history audience is exclusively courted, but rather disappointingly, is left hanging until the final chapters of the book.