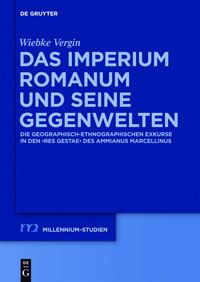 The digressions on geography and ethnography in the Res Gestae of Ammianus have been studied by a number of scholars. In the chapter on the 'Forschungsstand' Wiebke Vergin distinguishes three stages. In the 19th century Gardthausen and Mommsen concentrated on Ammianus' sources. In his seminal monograph on Ammianus Thompson (1947) discussed the place of the digressions in the overall structure of the Res Gestae. In recent studies by Matthews (1989), Kelly (2008) and Feraco (2004 and 2011), the focus is on the intratextual relations between the digressions and the historical narrative. Vergin's book, a 'geringfügig überarbeitete Fassung' of her dissertation (Rostock 2011) clearly belongs to this last category.

What distinguishes Vergin's book is the attention given to ancient rhetorical theory about the digression as part of a larger whole, a speech or a work of history. An entire chapter is devoted to Quintilian's observations on the use of digressions in manipulating the emotions and the views of an audience. After a further introductory chapter on Ammianus' 'Weltbild' in the Res Gestae, Vergin turns to her subject proper. Four chapters titled 'Alteritätskonstruktionen' deal with the digressions on Germany and Gaul (I), Persia (II), Orbis Romanus (Levant, Balkan, Egypt) (III) and Nomaden bei Ammian (IV; remarkably, the famous digressions on life in Rome are part of this chapter). Vergin ends with an Appendix on 'Flüsse als Konstituenten römischer Raum- und Herrschaftsauffassung', a concluding chapter on Ammianus' 'Weltbild' and a rich bibliography. The book is well structured and clearly written in the modern jargon in which 'Leser' becomes 'Rezipient', interpretation 'Dekodierung', to inform 'kommunizieren'. One gets used to it, reluctantly.

It must have been a predicament for the author that in 2004 Feraco published his thorough commentary on Ammianus' Persian digression and in 2011, the year in which this dissertation was defended, his Nuovi studi, in which he discussed the remaining geographical digressions, thereby covering the same ground as Vergin. [1] Both books are mentioned in the Bibliography, but it is obvious that Vergin has not been able to make proper use of Feraco's second book, while the first is quoted less frequently than one would have expected. Generally speaking, it can be said that the studies of Vergin and Feraco are complementary. Vergin's dissertation offers more theoretical observations and has accordingly a high level of abstraction, whereas Feraco's work is very strong in its philological analysis of Ammianus' text. Indeed Feraco's strength is Vergin's weakness. One gets the impression that Vergin has used Seyfarth's translation as her basis, which is quoted at great length, whereas the original Latin text is added perfunctorily in footnotes that are riddled with mistakes.

Vergin aims to show that Ammianus wrote his digressions not to show off his erudition or as a form of ornatus or to flesh out his narrative of the short reign of Julian, as earlier scholars have asserted, but as 'Erfahrungsmuster der Welt [...], durch die die Rahmenhandlung sinnkonstituierend untermauert wird' (287). This is easier said than done, since Ammianus refrains from making explicit remarks about his digressions, apart from saying that they must be brief and serve to avoid inconvenient interruptions of the narrative. Great attentiveness to intratextual allusions and a lot of reading between the lines are therefore needed to make a reasonable case for Vergin's claim.

Sometimes Vergin manages to convince the sceptical reader. It is, for instance, quite plausible to say that the violent nature of the Rhine (at least its upper reaches) evokes the wild nature of the barbarians living on its shore (279). The digression about the Lake of Constance, however, is a different matter. According to Ammianus, the Rhine flows through the lake without mixing its stream with its the lake's quiet waters, "as if they were an eternally hostile element" (translation by Hamilton). Vergin comments: "die Metaphorik ist evident: der statische See (Imperium Romanum) vermag den wilden Fluss (Barbaricum) lediglich für eine gewisse Zeit zu zügeln." This seems to me completely arbitrary. Besides, what about the message the metaphor is supposed to convey? Will the barbarians be victorious in the end? Ammianus would have rejected the idea indignantly. The interpretation is further weakened by the fact that Ammianus himself compares the Rhine in this respect with the river Alpheus and describes in almost identical words the passing of the Rhône through the Lake of Geneva (15.11.16).

Another example is provided by the digression on the Succi Pass in 21.10.3-4 (142-144). Ammianus points out that on both sides of the Pass there are famous cities: Serdica in Dacia and Philippopolis in Thrace. "It is as if nature foresaw that the surrounding peoples must come under the rule of Rome, and purposely contrived a gap, which originally opened obscurely between close-set hills, but in our great and glorious latter days has been made passable even by carriages [...]. The side which faces Illyricum has a gentle slope [...], the side which commands Thrace falls sheer down" (translation by Hamilton). Here Vergin comments: "Das Vokabular steht pars pro toto. Die dem Imperium Romanum zugewandte Seite des Passes ist "sanft emporragend" - die natürliche Beschaffenheit mithin die des Imperiums (my italics), ist also ausgewogen und berechenbar. Die dem alius orbis zugewandte Seite hingegen verweist auf die geographische Unwegsamkeit und die generellen Schwierigkeiten, die dem nicht-römischen Weltkreis [...] attribuiert wurden." (143) In my opinion this is not what Ammianus is saying. According to him the Succi Pass was created by nature to connect the western and the eastern part of the Empire, not to separate two different worlds, the Imperium Romanum and an (?) alius orbis, elsewhere called orbis Scythicus (209, 213).

In the section 'Die Goten in Thrakien' (221-229) Vergin deals with the events leading up to the battle of Adrianople. She speaks twice (224, 226) about a sack of Adrianople by the Goths one year before the battle. This must be based on a misunderstanding of 31.6.3-4, where Ammianus reports a failed attack on that city, to which Fritigern puts an end with the famous saying that he 'had no quarrel with walls.' In that context Vergin writes (227) "Wie zufällig fallen diese Ereignisse auf den Beginn des Winters - es scheint als neige sich nicht nur das Jahr dem Ende entgegen, sonder auch der Fortbestand westlicher Zivilisation." Such musings are best left unsaid.

One would wish that Vergin had been more critical of her own interpretations and had stayed closer to Ammianus' text, because her book contains a lot of valuable information about an essential aspect of his work and is a welcome addition to the fast growing scholarly literature on Ammianus.