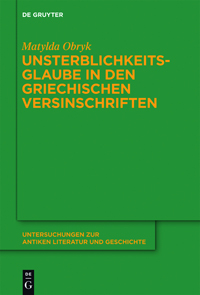 Matylda Obryk's monograph is a systematic study of various aspects of immortality in Greek inscribed epitaphs. It testifies to the growing interest in the study of Greek verse inscriptions beyond their mere epigraphical dimension as tools for glancing at rather neglected interfaces of the ancient world.

The book is divided into two parts. Part I (13-152) deals with a corpus of 64 inscribed epitaphs dated (mainly) to the Hellenistic and Imperial periods. These sepulchral metrical inscriptions are classified into six groups: (1) the dual nature of humans, (2) mythical images as vehicles of the belief of immortality, (3) conditional immortality, (4) catasterism and the sky vault as a place of retreat, (5) influence of cult and philosophy, and (6) denial of immortality.

In chapter 2 (38-77), Obryk deals with the use of mythical themes pertaining to immortality as contexts within which beliefs concerning the deceased's immortality are presented. This is one of the best and more challenging parts of Obryk's book. The first section is devoted to the connection of the deceased with certain mythical figures. The topics examined include: Ganymedes, the presentation of a deceased woman as the servant of various goddesses in the afterlife, rising from the dead of a student of Asklepios, joining the company of the Muses and becoming the tenth Muse for the deceased's soul, continuation of a young girl's life among the Naiads or the Nymphs, the snatching of a deceased female doctor by the gods and her transfer to Elysium, and deceased youths becoming the favorite of gods. In the second section of this chapter the author explores various afterlife locations where the dead go, like the meadow of the pious and Elysium. Obryk places within this group certain epigrams specifying explicit locations within Hades (Acheron, Isles of the Blessed) or stressing the role of well-known inhabitants of the Underworld (Aiakos, Minos, Persephone). This is a rewarding chapter in the sense that Obryk brings to the limelight a wealth of mythical contexts that the composers of these grave epigrams deftly employ, in order to freely variegate well-known patterns of thought. New combinations are now produced and the idea of immortality gains enormously in both depth and feeling.

In chapter 3 (78-93), Obryk studies a number of epigrams, in which immortality is offered on the condition of glorious deeds performed by the deceased. These deeds are not restricted to a single category of action or behavior but reflect a wide variety of activities: they can be heroic (C1-C2), they may stem from a righteous citizen's virtue (C3-C4), general good behavior (C5), or sophrosynê that may create the expectation of a return to life (C6). Immortality may also be interpreted as eternal sleep (C7-C8) and as a condition of co-existence in the afterlife of those in love (C9). At the end of this chapter the author attempts to classify these epigrams into two groups, the first involving those cases in which immortality or rather the promise for immortality is anchored to the memory of the deceased in the world of the living, while the second is associated with the various ways the life 'beyond' may be represented. Obryk rightly stresses the fact that certain epigrams display the notion of analogy between one's way of life and the quality of the afterlife he will experience.

Chapter 4 (94-115) is an examination of the motif of catasterism in connection to the idea of immortality. Catasterism has its own evolutionary process in Greek thought, first restricted to a more or less purely mythical environment and much later acquiring political dimensions, especially in the Hellenistic and Imperial periods. In the corpus of epigrams examined by Obryk, catasterism amounts to a form of consolation for those inhabiting the world 'beyond', since they will continue their life as stars in the sky instead of being placed below the surface of the earth. In this light, the author is able to trace in certain sepulchral epitaphs the influence of standard astrological literature as Aratus' Phaenomena (D1-D2). Other epigrams present one's immortality in the context of the creation of a new star (D3), sometimes blurred with other motifs such as the duality of body and soul (D5) and the meadow of the Blessed (D4). Last, Obryk presents three epigrams (D7-D9), in which catasterism is associated with professional activity and excellence (D7: unspecified, D8: astrologer, D9: priestess of Isis). The chapter is well organized but I think it would have profited from a more detailed analysis of the way the motif of catasterism is combined with other motifs, especially those pertaining to immortality itself (duality of body and soul being prominent). Dictional considerations would also have been of some help. For example: does the use of teiresi instead of the much more common astrasi tell us something about the interpretation of this inscription? A comparison with l. 4 of D8 and the diction used in the Shield of Achilles (where we also find antyx and teirea) may have been illuminating.

In Chapter 5 (116-146) Obryk examines 11 inscriptions displaying influences from cult and philosophy that are organized under three topics: (a) the cold water of life, (b) Dionysiac dances, and (c) philosophical consolation. The author rightly places all these influences under the umbrella of the radical changes made in Greek society as it evolved from its nesting in the classical polis to the Hellenistic and Imperial metropolis. By 'cold water of life' (epigrams E1-E6), Obryk refers to the cult of Isis, the personified Earth, and Osiris, the personified river Nile, who fertilizes her. 'Cold water is for the follower of this cult the safest guarantor of immortality' (119). Under the rubric 'Dionysiac dances' (E7-E8), the author analyses two epigrams in which a Dionysiac connection to the theme of immortality can be observed. The last part of the chapter (E9-E11) is devoted to the theme of consolation for the loss of a beloved person, a topic which Obryk rightly examines within the framework of platonic, pythagorean, and neoplatonic philosophy.

Chapter 6 (147-152) is devoted to the presentation of three epigrams, in which immortality is denied, either by recourse to ideas found in Epictetus and Seneca (F1) or by a witty argument that consolation can be achieved through the realization that even the sons of the blessed have gone under the earth (F2) or that the grave is the eternal place of retreat.

Part II (Chapters 1-3, 155-210) is devoted to the analysis of the various beliefs pertaining to immortality that the author has presented in the examination of the corpus of grave inscriptions in Part I. The author explores three key aspects of beliefs in immortality: mediators, places, and preoccupations in the afterworld. Obryk argues that each of these three aspects displays a double categorization, since it pertains both to this and the other world. Typical examples of this structural principle permeating the entire corpus of sepulchral epigrams examined by the author are: the soul as Lebensprinzip and metaphysical entity (mediator), the grave as the place of eternal sleep or the participation of the deceased in divine festivities (place), the continuation of life in the underworld where the deceased's wife will be singing his piety (preoccupation).

This is a welcome contribution to the study of Greek metrical inscriptions. It is clearly structured, reader-friendly (the classification system used for the corpus of epigram works quite well), and accurate. Personally, I would like to have seen a more close literary analysis in Part I, the more so since various dictional and thematic features contribute to the particular filtering of each epitaph.