Barbara Furlotti: A Renaissance Baron and his Possessions 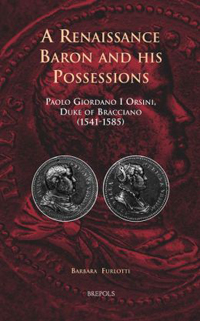 Before the publication of Barbara Furlotti's book, part survey over the ducal possessions - part archival documentation, Paolo Giordano Orsini (1541-1585) had been leading a shadowy existence as the murderous husband of Isabella de' Medici. Fat and awkward, he has been described as the sort of political match brilliant Isabella de' Medici was forced to make as a family obligation and the sort of buffoon she could not but betray. Such a role really sounds more like a set part in a Commedia dell'arte production and is at times contradicted by archival evidence, for example in the Medici papers when "Pagolo Giordano" appears as the bearer of gifts of ancient art (185). Letters sent between Isabella and Paolo Giordano also attest to warm feelings at least to begin with, whatever may have happened later on in their relationship.

Thus this new study fills a considerable gap in our knowledge about this descendent of one of the oldest and most important baronial families in the Papal States. It is obviously not the main goal of this book to refute evil rumours surrounding Paolo Giordano and his relatives; the black legends are mentioned and discussed on the basis of archival evidence as are the obvious merits of a man immersed in the aristocratic pastimes and cultural pursuits of his time. While it does not make him a better person, or a more likeable one for that matter, to learn that he was a good dancer (43-4) and a keen collector of antiquities (96-108) who purchased the entire Stampa collection of anticaglie from the former owners in 1582 (95), both hobbies go some way to attest to Paolo Giordano's good taste and undoubted accomplishments.

What may endear him to the reader though, is the fact that Paolo Giordano modernised and refurbished his residences in Rome and on Lake Bracciano for the much desired arrival of his bride after her father's death in 1574 but nonetheless also spent long periods in Florence to be with a wife who had already found her role at her natal court. The castle of Bracciano, to this day in the hands of the Odescalchi who bought it from the Orsini in 1696, became the seat of a collection of portraits of Orsini forbears with the family's coat of arms and many a reference to their family ties to the House of Aragon and Naples in full view (90). Princes of the blood as well as of the church, the Orsini (as well as the Odescalchi and Colonna) numbered dukes, popes and cardinals among their relatives. The collection in conjunction with the context of its display cannot only be interpreted as an expression of family pride, but also as an imitation of and competition with the forms of presentation adopted at rival courts.

In 1576 Isabella de' Medici died suddenly at the Medici villa of Cerreto Guidi. The daughter of Cosimo I de' Medici and Eleonora of Toledo had married Paolo Giordano Orsini in 1558. The couple, similar to other aristocrats at the time, led an often separate, itinerant life moving between the different family residences in Rome, Florence and near Lake Bracciano. Apparently, Isabella was not only reluctant to leave Florence and move to her husband's court as would then have been the custom for dynastic brides; after her mother's death in late 1562 her widowed father also relied increasingly on her presence at the Medici court. Used to the rule of powerful women such as Isabell the Catolic, of her grandmother Maria Osorio Pimentel, Marchioness of Villafranca, and her mother Eleonora of Toledo, Isabella had been brought up according to a mixed cultural heritage that owed as much to Spain and Naples as to Florence. She rated her independence highly and would, most likely, not have appreciated the relative seclusion of Bracciano, nor living under public, perhaps hostile scrutiny in Rome. A short visit to the eternal city in 1575 did not turn into the hoped for permanent move.

Not least the untimely death of Isabella's cousin and friend Eleonora di Garzia di Toledo, murdered by her husband Piero de' Medici at the villa of Caffaggiolo, gave rise to rumours and black legends. According to these, Paolo Giordano had killed his wife in a jealous fit a few days after the murder committed by his brother in law. A decade later the sudden demise of Francesco I de' Medici and his second wife Bianca at yet another villa, this time Poggio Caiano, caused similar suspicions. Certainly, life was cheap in the 1500s, but between the sixteenth and the nineteenth century gossip started to include a wide range of murder cases among family members as well as incest, perhaps comparable to the black legends surrounding Catherine de' Medici and her children at the Royal court of France. Paolo Giordano himself also fanned evil rumours by claiming straight after Isabella's death that Eleonora and Virginio Medici Orsini were not his children.

Whatever may have happened in 1576, and it may never be possible to find out the truth, the mid 1570s nonetheless seem to have been a crucial time in the life of Paolo Giordano. Whereas before he appears to have sought fame as a military man, after all he participated in the sea battle of Lepanto in 1571 (22-25), from now on he concentrated on his private life and possessions, which were going to increase steadily in number and quality despite his financial problems which became worse after Cosimo de' Medici's death had brought the end of payments from his wife's family. Furlotti's book includes transcripts of the inventories (211-82) preserved at the Archivio di Stato in Rome and among the Orsini Family Papers at UCLA dating from 1577 to 1585 (the year when Paolo Giordano died). There is also a separate list of books taken in 1575 from Rome to Bracciano (283-91). While this does not mean that there may not have been other, earlier inventories at some point, it is still significant that these lists were preserved despite the turmoil surrounding the death of the first duke of Bracciano and the subsequent murder of his second wife Vittoria Accoramboni. It is also interesting to note that Ferdinando, brother of Francesco de' Medici, cardinal in 1585 but soon to succeed to the title of Grand Duke of Tuscany, took great interest in having the goods preserved in the palace at Campo de' Fiori carefully inventoried for his nephew Virginio.

This study takes a very detailed look at the archival evidence of Paolo Giordano's possessions, at the ways he managed his goods and finances, and at the forms of control he tried to exercise over his own image both during his lifetime and after. At a time when the role of the warrior nobles was gradually but radically changing to a class of refined and cultured courtiers, he like his peers may have been frequently puzzled by the requirements he had to fulfil. As part of the baronial clan society he may have been tempted to sort out any difficulties by the sword but he nonetheless also tried to fit in with the new aristocracy. Ultimately, though, and despite his many possessions, this baron's afterlife remains overshadowed by the prejudices against his class rather than judged according to his endeavours.