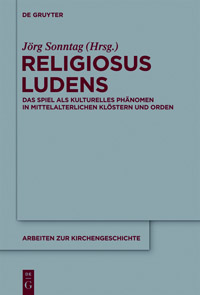 In September of 2010 the Cistercian abbey of Heiligenkreuz near Vienna hosted a conference on the theme of "Play in the Medieval Cloister". The essays collected in this volume are the fruits of their collaborative effort. An opening introductory essay by Jörg Sonntag surveys the stakes of the volume as a whole. He notes that while medieval historians have often studied cultures of sport and play in the contexts of royal and princely courts, they have neglected the possibilities of new research grounded in the life of the cloister. More importantly, however, and rightly, Sonntag points to the ways in which the study of play in the cloister has the potential to reveal much about medieval culture generally.

The essays that follow are divided into four parts. The first, a series of three essays, establishes a theoretical and conceptual framework for the volume. Rainer Buland analyzes the relevant words - ludus, play, game, sport, Spiel and so on, and their various concrete manifestations. He then turns to a topological analysis, showing how various medieval games (chess, the mathematical board game known as rhythmomachia, even children's play and ball games) found a place in the precincts of the cloister. Buland also emphasizes the power of play and games across a wide spectrum - from word games and the music and movements of the liturgy - to shape religious life. Arnold Angenendt then reflects on liturgy as both similar to play, and yet different from it: both share a sense of fixed rules, for example, yet liturgy's orientation is transcendent rather than temporal, toward the divine rather than toward human skill or victory. Angenendt turns to Christian liturgies, and points the ways in which they eventually inspired music, dance and play - most famously, of course, the drama of so many Passion plays, but also in the heroic, indeed athletic ascesis of the countless rounds of private masses sung for the souls of benefactors at Cluny and beyond. Sonntag concludes the series with an exploration of the complex set of tensions and relationships between ludus and vita religiosa: With its daily round of rituals and fixed rules, religious life was anything but a life of leisure or diversion. As an ideal that inspired creative movements of the spirit in figures like Francis, or as a pathway to the divine for mystics, its force could prove disruptive, a "game changer" for traditional patterns of life. Yet the force of tradition itself could in turn co-opt the impulses of play, drawing them back into established structures and rules. A few generations after Francis' death, there was little place for the drama of his ioculatores domini, and the force of mystical experience was all too easily channeled in dolls and devotional images.

A second series of essays engages the ways in which clergy sought by turns to condemn and regulate the cloister's culture of play. Lars-Arne Dannenberg offers a survey of the canonical sources for the condemnation of games among the ranks of clergy and religious, focusing on two key passages in the Liber Extra (X 3, 50, 1 and X 3, 1, 15) and their commentaries. Two essays then turn to the mendicant orders and the Italian urban scene. Alessandra Rizzi explores the spectrum of positions adopted by mendicant preachers and pastors. They famously thundered against games and gaming (especially dice and dancing, cards and jousting) from the pulpit. Yet they also approached the subject with nuance, especially in the confessional, and cultivated a certain tolerance for a variety of licit games. Repeatedly at stake in their preaching, writing and teaching was an effort to distinguish between licit and illicit ways of earning wealth, to explore matters of intention and conscience, and a concern to uphold a moral and economic order centered on the common good. Thierry Depaulis then turns to Franciscan condemnations of card games, and in particular to the preaching of Bernardino of Siena. For Depaulis, the condemnations of Bernardino (and other Observant preachers across the order, and eventually Protestant preachers as well) reflected the relatively late arrival of card games on the cultural scene: the cultural "invasion" of the card game seems to have begun only in the late fourteenth century, and moralists could at first find no easy way to account for it in their traditional categories. Bernardino's sermons (one of which Depaulis republishes here in an appendix, from an edition by Robert Steele) were powerful - he described the card deck as the "Devil's breviary", and linked the cards' individual images and symbolism to every kind of sin. But in the end the rhetoric was ineffective. As contemporaries remarked, as soon as the sermons were over, the games returned.

Part three turns to the possibilities of play for the communication of norms, for entertainment and artistic production. Kay Peter Jankrift explores the place of physical exercise (motus et exercitium) in the cloister, framed within the tradition of Hippocratic-Galenic medicine. Jankrift's creative readings of scattered references reveal a mosaic of nuanced attitudes, many of them approving of exercise and movement. Late medieval physicians, especially, were more open to the therapeutic benefits of walking, riding and ball games even for clerics and religious, so long as these were undertaken in ways appropriate to age, condition and status. Heiner Gillmeister then offers a brief survey of the history of games in the cloister, with particular emphasis on the history of tennis (jeu de paume). From a variety of sources - Chaucer's works, Beleth's liturgical commentaries, Caesarius of Heisterbach, manuscript illuminations and sculpture - Gillmeister concludes that the game, though often condemned, was "widespread in the religious houses first of France and then of England from the 12th to the 16th century". Jean-Michel Mehl explores the meaning of dice and board games. From a wide variety of sources, Mehl draws out the complex picture: shaped variously by institutional circumstance (adult converts to monastic life, the military orders, the mendicants in schools and university), different games had different fates. Dice, for example, by turns condemned for promoting vice, was also tolerated, even embraced for its didactic purposes. Ulrich Schädler's contribution explores those didactic functions in more detail. He notes the popularity of rhythmomachia, variants of chess played with dice, and backgammon as teaching tools that could reinforce the basics of Latin grammar, arithmetic, and the singing of liturgical formulas. As one of his most striking examples, Mehl adduces the ludus clericalis seu regularis of Wibold of Cambrai, a three-dice game whose resulting numbers, in their dozens of combinations, helped teach Christian virtues. Francesca Aceto offers a close reading of the Franciscan mathematician Luca Pacioli's De viribus quantitates, a work that again underscores the pedagogical value of play. Pacioli's treatise, composed around 1500, is a work filled with intellectual games centered on numbers, mathematics, and memorization. For Aceto, the game reflected the importance of mendicant thought as a mediator between university and society, and in shaping an urban, lay culture increasingly devoted to the intellectual training of "men of action". Elisabeth Vavra's essay concludes part III. It turns from texts to objects, to the material culture of games and gaming in the cloister. Chess pieces, dice, game boards were produced in cloister workshops, especially in the early middle ages. They were also a part of daily life, with older and more precious items even reused in more sacred settings. The material evidence is, as always, fragmentary, and it is often compellingly enigmatic: One particularly rich late-medieval find from the community of Augustinian Hermits in Freiburg-im-Breisgau survives, interestingly, from a latrine. Were the objects merely lost there over the years, or perhaps cast there intentionally, whether by repentant friars or their outraged superiors?

Two synthetic essays conclude the volume's fourth part. Sonntag offers reflections on the various models that justified games and gaming in religious life, helped reinforce a sense of divine order, and to train religious hearts and minds in its teachings, values and virtues. Sonntag shows how the same models shaped and reflected culture beyond the cloister, in courts and urban settings. He notes the various spaces that shaped religious models of play (the cloister itself, and the university classroom) as well as the media (art and material culture, literature, sermons) that communicated about and helped legitimize those models. Nicolangelo D'Acunto concludes with a series of reflections on the relationship between play and discipline. Recalling the ancient notion of the "athletes of God", and with an exegesis of a famous passage in which Peter Damian recalled the discipline of Dominicus Loricatus, D'Acunto highlights how play could be at once free and highly regulated; artificial and performed, yet terribly serious business; embodied and carnal, yet also deeply spiritual.

This is a strong edited volume, creative in its conceptualization and refined in its theoretical awareness. Sonntag's editing presence, firm but always light and sensible, is discernible throughout, and lends the collection that certain coherence that is so often elusive in works of this kind. Some of the darker shades of play (the worldly excess, financial loss, even physical violence, for example, that were so often fueled by sensibilities of lordship, honor and status) are at times not as discernible as they might have been. But these essays are of uniformly high quality. Their conclusions are nuanced. They engage their subject across a broad and interdisciplinary range. And they rightly frame the cloister's culture of play as a story of tensions, interactions and possibilities rather than strict dichotomies. In that regard, especially, this book is a valuable contribution to the study of both the religious orders and of medieval culture more broadly.