Janet Downie: At the Limits of Art 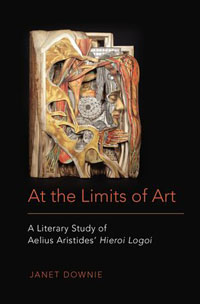 This monograph, entitled 'At the Limits of Art: A Literary Study of Aelius Aristides' Hieroi Logoi' (a revised doctoral dissertation) aims to offer a reading of this unusual text "as Aristides' calculated intervention in the contests of self-fashioning promoted by Antonine society" (viii). Indeed, Janet Downie succeeds in doing just that. In an introduction and five chapters of sensitive narrative analysis Downie offers a refreshing reading of the text, in a fashion which often touches upon more traditional aspects of classical philology, while never losing sight of her primer objectives.

In the introduction (3-35) Downie presents the person of Aeius Aristides as a distinguished sophist who was admired by his contemporaries and late antique readers. The introduction also offers Downie an opportunity to place her study within pre-existing scholarship on Aristides in general and of the Hieroi Logoi in particular.

The first chapter (37-56) examines the role of the God in the text. It is an interesting examination of "the problem of discontinuity between the 'diary' of HL 1 and the more thematically oriented account that Aristides presents in HL II-VI" (38). Questions to be raised and addressed here include an inquiry into the source-material available to Aristides in the time of composition of the Hieroi Logoi and the use of memory to fill in the gaps. Moreover, in the first chapter Downie sheds light on the use of the Hieroi Logoi's elusive narrator (Asclepius and Aristides interchangeably) in order to emphasise the claim of Aristides to be a unique orator.

The second chapter concerns dream description and dream hermeneutics (57-85). The wide existence of descriptions of dreams in the Hieroi Logoi and the particular language in which they are being described are convincingly explained by Downie as an attempt to "engage the problems of literary description in a way that other literary and votive accounts of dreaming do not" (59). Modern approaches towards dreams in classical antiquity are, as Downie herself acknowledges, many. They touch upon the understanding of the dream-mechanism itself, their role in the cult of Asclepius, their meaning and use in medical contexts, their record in votive inscriptions and in other contemporary works of literature. Impressively, Downie succeeds in making her argument aware of all these topics without losing her line of argument.

The third chapter (87-125) offers a presentation and analysis of Aristides' descriptions of his ailments and cures as performativity acts, with particular attention to an examination of the "body as a space for divine encounter" (113). Here too Downie manages to focus on discourse analysis without deviating into more technical questions, such as the inter-relations between temple medicine and scientific medicine (89-90) and Aristides' use of medical vocabulary (92), while still acknowledging the relevance of these issues to an understanding of the Hieroi Logoi. Similarly, Downie examines the themes of pain and pleasure in the HL in the context of second century (mainly Christian) literature (102-13) and Aristides' attempts to present himself as a vessel of Asclepius, thus presenting his work to enjoy divine approval.

The fourth chapter offers an interpretation of the Hieroi Logoi as a prose hymn to Asclepius (127-53). Here Downie skilfully shows the influences of various literary trends and genres on the composition of the Hieroi Logoi, mainly, but not solely, by placing the work within the more general context of Aristides' oeuvre.

The fifth and final chapter examines Aristides' attention to his place in society, as a scholar of note and as Asclepius' disciple (155-81). The means used is an episode from the fourth Hieroi Logoi in which Aristides claims immunity from public liturgies in a Roman court during the pro-consulship of Severus at 153 CE. The grounds for this claim was a series of rescripta, dating from the Flavian era onwards which bestowed immunities from liturgies on teachers of grammar and rhetoric. Downie uses this episode to illuminate how Aristides glorified himself by portraying his own image as a vessel of the god, thus suggesting his work to enjoy divine approval. Though not a legal historian herself, Downie uses the work of Bowersock, Nutton, and Millar to provide the legal context. Here too Downie is able to maintain a clear line of argument without digressing to the more technical province of Roman legal history than necessary.

Throughout this monograph, Downie displays a mature and responsible approach to her source-material, and the reader is never lost. Although her topics bears close encounter with various other well-discussed topics, such as the place of Aristides in the context of the so-called Second Sophistic, personal religions during the Antonine Age, ancient medicine, and Roman law, her main focus remains literary throughout. The bibliography used is thorough and up-to-date. Editing is diligent. Language and style are attractive. As a revised thesis, Downie tends at times to begin at a basic level. This could prove highly useful to readers recently acquainted with the topics discussed. The form of the monograph will allow more experienced readers to easily navigate to the heart of Downie's argument. All in all, it is a very welcomed addition to the study of Aelius Aristides in general and of the Hieroi Logoi in particular.