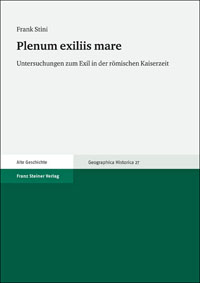 The title of this book -originally the author's doctoral thesis- reminds us of a quotation from Tacit (Tac. Hist. 1.2.2) and makes an important contribution to the study of exile and the new nature and forms that this punishment took during the Principate. In fact, exile in this period and at the end of the republic became - as is known - properly a punishment for the first time rather than a right to avoid legal penalties or to face a criminal procedure, as it used to be under the Republic. The scope of this novelty and the exact moment is still widely debated.

As in the introduction - in the first chapter - is clearly stated, the book under review tackles exile not exactly from a legal point of view, but it embraces both legal questions and problems related to its social and political context; not to mention the literature of exile, in other words, literature written by prominent exiles such as Cicero, Ovid or Dio of Prusa. The book is focused on what specifically was meant by exile in its actual features, especially where geographical aspects and its value as a punishment are concerned. By relying on archaeological and literary evidence the authors reconstructs precise data of the exiled people of this period and their personal circumstances.

The second chapter is a brief but accurate status quaestionis, starting from Mommsen's "Strafrecht" to Kelly's criticism to Crifò's theory and more recent contributions. The third chapter is focused on legal aspects ("Rechtsgeschichtliche Aspekte", 28-53). The essential question - unsolved and probably without any clear answer in the available sources - is when aquae et igni interdiction experienced a substantial change that transformed its nature and scope. As the author points out, it became a penalty - a mild one - in the late Republic, without loss of property rights. The term exilium, as Stini rightly outlines (30), embraces every form of banishment and also the place where this punishment was carried out and that in the Principate designates both deportation and relegation. The author comments on the legal evolution of exile starting from the republic. In this period, exile was a kind of right that the citizen had to avoid the consequences of a criminal trial (Cic. Caes 100). The interdiction of water and fire was properly not a punishment but merely an administrative act but the content of it is still controversial. Originally Mommsen postulated a link between this proscription and the quality of non-citizen, thesis that other scholars reject to the extent that subsequent scholarship (starting from Kunkel) has been shaped against this theory. As stated above it is clear notwithstanding that exile was no longer a right but a punishment under Sulla, at least according to both literary and legal sources. [3] Kunkel had insisted on this idea, which today has been practically accepted (34-35). [4] In this chapter also relegation is tackled, starting from that ordered by the Senate and the magistrates cum imperio. Relegation was possible as a consequence of the freedom of courts to grade punishments, a feature of the new regime. This point is fully developed in the following chapters. The interdiction of water and fire under the empire is dealt with, by pointing out its new characteristics, such as the prohibition of making testament. Where deportatio in insulam is concerned, under the Principate, the Roman citizen who was deported was reduced to the same condition of a non-citizen. Two essential points that are constantly present throughout the book: the consequences of the introduction of the new criminal procedure and the alleged differences between humiliores and honestiores.

The fourth chapter ("Quantitative Dimension und Quellenbasis", 55-63) deals with the quantitative significance of exile according to the available sources. In fact this chapter reviews this evidence, relying mainly on literary sources that bring the names of 250 exiles from the assassination of Julius Caesar to the end of the Principate, but this number is only significant if some studies on the different kinds of exiles are carried on. (e g profession -philosophers, astrologers, actors- ethnic origin...). Some other factors must also be borne in mind, such as the biased evidence, concentrated on Rome and on the ruling classes. Epigraphic and papyrological evidence is also mentioned.

The fifth chapter ("Betroffene Personen und Personengruppen", 64-116) Stini does exactly that job of collecting data of different groups of exiled people. A reliable statistic is not exactly possible due to the biased evidence. For example some information depends purely on the personal interest of the classical author in exile. Stini explores cases such as the members of the imperial house (vid. outline, 73), starting from the famous case of Julia, the daughter of Augustus, exiled in Pandeteria to the less popular of case of Hortensianus in 205-11 AD. Regarding political opposition the author follows Raaflaub's critical approach according to which opposition could be not be understood according to the usual institutional approach. [5] The author also makes some interesting remarks on the procedure de maiestate before the Senate, which paradoxically implied sentences to banishment with death being the legal punishment according to the lex Iulia de maiestate. The same goes for procedures according to the lex Iulia de peculiis repetundis. The author rightly points out the fact that this flexibility allows the emperor to inflict sentences according to his personal decision and to present them under a more positive light.

The sixth chapter ("Exilstrafen aus der Sicht der Verbannenden", 117-188) comments upon the importance of the new regime in having created new courts that in their turn made IT possible to assess punishment. This possibility entails some consequences, such as the difference between honestiores and humiliores (mentioned around the crimen maiestatis), whose scope remains controversial or the rhetorical use of the clementia Caesaris. Geographical destination could have something to do with the possibility of - at least in theory - mitigation and assessment of punishments. The author reviews the use of exile as a milder or mitigated punishment and as an alternative to the death penalty. After a detailed study of particular cases Stini concludes that security is one of the main features of the regulation of this punishment where the place of being exiled is concerned. Geographical reality is normally involved with the risk of having an exile on an island, kept under surveillance or deported. Each particular decision of the emperor or the courts has to do with the risk of escape and normally also to political reasons. The case of reges clients is an exception and this subject is as such developped in an appendix to this chapter (184-188).

The particular geographical aspects are dealt with in the last chapter ("Geographische Aspekte", 189-212). In this chapter Stini tries not only to describe the different places but also to establish a hierarchy among them. This question is capital since in the aqua et igni interdiction there was no room to decide the place of exile. Directly related to those geographical elections is the distinction between relegation and deportation, which derives from the possibility of determining the degree of punishment or even its reversibility. Distribution or concentration of exiles is an important aspect of this policy that is rightly studied by the author. The theoretical part of this book is closed with a general evaluation of the mentioned relationships between the new role played by the emperor as judge, the new courts and the new punishment, which incurs exile. A complete catalogue of exiles in alphabetic order is included as a second part (210-295), according to literary and epigraphic sources with bibliography. Also a chronological table is included, in which the exiles of the precedent catalogue are ordered.

The summing up of the book under review has been an interesting study in the social and legal problems of exile during the empire, dealing with a variety of evidence and relying on a complete literature on the subject. Some legal problems could have been developed in depth but a properly legal approach was not the aim of the author. In any event, the legal content has been commented on with acute detail, relying on the most complete information on the principal problems. It is surprising that a non-jurist was able to evaluate the different consequences derived from the change of criminal procedure with a reasonable degree of competence. On the other hand, the analysis of the personal situation of the exiles sheds light on many legal aspects of this punishment and helps to understand the differences in practice between relegation and deportation and the causes behind the decision of choosing one place or another for the banishment of an individual. This ability to deal with legal problems with acceptable skill and the use of data to explain the social or political aspects of exile is one of the main features of this suggestive contribution.

[1] In my entry "Exile" in R.S. Bagnall et al. (eds.): Encyclopedia of Ancient History, Oxford 2012, 2595-2296, I commented that the book by G. Crifò, normally quoted as an essential contribution and as criticism to Mommsen, was never finished. He only published the first part: Ricerche sull' "exilium" nel periodo repubblicano I, Milan 1961 and some articles that revised in some way his previous opinions) and that his conclusions were highly debated (vid e.g the review that M. Fuhrmann published in SZ 80 [1963] 451-7).