Jenifer Ní Ghrádaigh / Emmett O'Byrne (eds.): The March in the Islands of the Medieval West 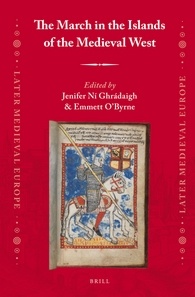 It is twenty-five years since the publication of Robert Bartlett and Angus MacKay (eds.), Medieval Frontier Societies (Oxford 1989), and twelve since David Abulafia and Nora Berend (eds.), Medieval Frontiers: Concepts and Practices (Aldershot 2002) was published. These collections, and the works of historians such as Rees Davies, Robin Frame, and most importantly Bartlett in his The Making of Europe: Conquest, Colonization and Cultural Change, 950-1350 (London 1993) have ensured that medieval Europe's marches or frontier zones now receive at least some attention in historical accounts that still for the most part equate Europe with England, France, the Low Countries, Germany and northern Italy. The March in the Islands of the Medieval West is to be welcomed as a timely reminder of the value of continuing this recent tradition.

The volume is really about Ireland. The slightly clumsy title comes about as the result of including William W. Scott's briskly-written revisionist article on the March laws of thirteenth-century Scotland. This is one of the strongest contributions to the collection, but disappoints in failing to discuss the changing role of law on the Anglo-Scottish border within a broader, British-Isles context. March law in Ireland, and the more general practice of arbitration throughout England, could profitably have been brought into the analysis. By no stretch of the imagination can this attractive essay be said to support the editors' declaration that the 'strong and central theme uniting the varied contributions that make up this volume is the Gaelic world as a perceived margin' (288).

This does not matter greatly, and most essays have something new and useful to say about late medieval Ireland. The editors stress their commitment to an interdisciplinary approach to their topic, and a strong feature of the volume is the careful but imaginative use of archaeological, architectural, and art-historical evidence by many of the contributors. This is particularly apparent in the splendid essays by Clare Downham on Viking conversion to Christianity, Jenifer Ní Ghrádaigh on Romanesque fashions in the twelfth century, Danielle O'Donovan on building styles in the Butler lordship, and Rory McNeary on fortifications in Roscommon. Each of these contributions, and many others in the volume, are supported by very well-produced photographs and maps, and the volume as a whole displays high production standards. With the exception of some intriguing and all-too-brief remarks in the conclusion (287) about the portrayal of Ireland (or is it Wales?) in Piers Plowman, literary analysis is a discipline not called upon in the volume to illuminate its themes, which might be considered a missed opportunity.

In their introduction the editors declare their intention 'to interrogate the distortions and complexities inherent in any analysis of those territories of the insular west and their inhabitants which were almost aggressively represented as march, border, or frontier by contemporary commentators and legislators' (2). Their point that hostility underlay some of the observations of writers such as Gerald of Wales and Froissart about the nature of Gaelic society and settlement is well made, but not much direct attention is paid to this matter in the essays that follow. O'Byrne argues strongly that the English crown sought to bring the native Irish within the common law, only to have its aims frustrated by the colonial elite in Ireland. This view needs to be balanced by reference to Seymour Phillips's remark that English royal power knew few trammels at this time and was effective in march areas throughout the lands claimed by the crown. Edward I was, in Phillips's words, 'a terrifying figure' (256), and Edward III was no less effective in having his will obeyed throughout his domain. As for Richard II, it took a rebellion to finally weaken his grip on power, so complete was his control of parliament by the late 1390s. Had he or any of his predecessors on the English throne over the course of the previous century really wanted the native Irish to have use of the common law then that is what would have happened, regardless of the wishes of the settler community. It cost Richard II nothing to show some sympathy with native Irish concerns, but it was their submission that he wanted, not their goodwill.

For contemporaries, the march meant disturbance. Frontier violence hovers in the background of many of the contributions to the volume, and is brought to the fore in a few. Most useful in this regard is Margaret Murphy's account of the experience of the royal manors of south Dublin, and their economic fortunes. Something changed quite dramatically in the early 1270s in the nature of native involvement with manorialised centres in this part of Ireland, and the violent Irish raids of that decade, and of the 1290s dealt blows to the settlement from which it could never recover. Murphy does well to place this weakness in the context of 'the general European experience of falling population and declining economies' (76), and this adds force to her concluding remarks about 'the resilient nature of a core group of tenants, who, despite the vicissitudes they suffered, were determined to stay the course and remain on their lands' (77).

The sense of communal awareness among the settlers is fruitfully examined in the essays of Howard Clarke and L. M. Doran. Both are concerned with the history of towns - Dublin and New Ross respectively - and it is again part of a European experience that town-dwellers should have developed institutional structures to represent their interests at an early stage of English involvement in Ireland. In the Irish context, and in the context of a focus upon the marches, what Doran's essay brings to mind is that it was not the attacks of the Irish that encouraged the inhabitants of New Ross to build walls around their town. Instead it was the behaviour of the settler nobles who, in the middle of the 1260s, engaged in a bout of competitive and violent feuding that wrought destruction throughout the settled regions of the island. Not all violence on the march, in other words, saw native Irish pitched against English settler.

This is a strong collection of essays that adds to our understanding of the medieval European frontier in its Irish setting. The combination of established scholars and early-career specialists works well, and the commitment to interdisciplinarity is genuine and rewarding.