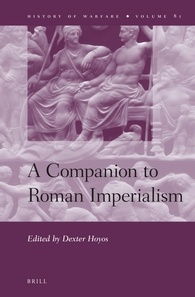 "Roman imperialism" has been making a comeback in recent years as a primary approach to the Roman empire. It was dominant in the early years of the twentieth century, encouraging an early wave of comparative empire studies, and again in the late 70's and 80's, when William V. Harris' game-changing War and Imperialism in Republican Rome, 327-70 BC (1979) sparked off new debate about what motivated Roman expansion. A Companion to Roman Imperialism appears amidst renewed, early 21st century angst about the rise and fall of empires, particularly around challenges to the ascendancy of the west, especially the United States.

To write of "Roman imperialism" rather than "the Roman empire" is to align oneself with certain traditions of thinking about empire, and to ask one's questions within a certain framework. "Roman imperialism" usually (but not always) implies the adoption of a critical stance on Rome, and probably on empires in general. In my view, the problem with the term does not have to do primarily with politics but rather with how one defines one's subject and understands the working of power and empire in the Roman world.

A Companion to Roman Imperialism offers little in the way of a road map, either to help us find our way through the collection as a whole or, in most cases, through individual essays. However, those acquainted with the sorts of assumptions and preoccupations of "Roman imperialism" will be on familiar ground.

Hoyos' brief "Introduction" slides between concepts of "imperialism" and "empire", but emphasizes trajectories of rise and fall, explanations of Roman expansion, the character of Roman rule, comparisons with modern empires, and receptions of the Roman empire. The volume is divided into three parts: "The Imperialism of the Roman Republic", "The Imperialism of the Caesars", and "The Provinces and Rome". Hoyos is careful in his "Introduction" to emphasize that Rome was "multicultural" (15) and that "Romanisation" (13) is a debated term. However, the structure of the volume as well as the path followed by many of the individual essays tends to reinforce the notion that 'imperialism' is a story that is exclusively driven by Roman initiative and Roman actions. Expansion, framed by political and military questions that primarily concern Rome, is largely assumed to be separable from the cultural effects of empire, where the focus is primarily on subject peoples. These cultural effects are generally periodized, associated with the Empire of the Caesars rather than with the Republican empire.

There are a few excellent essays. Jonathan Prag's and David Potter's in particular deserve our full attention. Prag's "Sicily and Sardinia-Corsica: The First Provinces" analyzes the processes by which Rome began to treat Sicily and Sardinia as distinct from Italy, helping to generate both the idea of Italy as an entity and the concept of an overseas province as a territorial unit of empire. Potter's "The Limits of Power" is a little condensed, but a slow and careful read is rewarded by a sophisticated argument about how Roman frontiers worked between the 1st and 3rd centuries CE. He explores the extent to which territorially demarcated areas of 'hard' control (provinces, boundaries designated by import and export taxes, walls and other structures) coexisted with fuzzier areas of 'soft' control (through e.g. treaties and conditions).

Others contribute in the way that good "Companion" volume essays can do, making them invaluable for teaching and for all of us who need to get a handle on current debates and interesting questions in less familiar fields. Paul Burton's "Enter the Muse: Literary Responses to Roman Imperialism (240-100 BC)" is an elegant and concise discussion of the ways in which early epic and comedy reflect on militarism and the cultural effects of empire. Richard Alston's "Augustan Imperialism" sets out a case for upholding the Augustan period as a watershed in terms of state formation and imperial innovation. Richard Hingley's "Exploitation and Assimilation: the Western Roman Empire from Augustus to Trajan" catches us up with the last few decades of debate about "Romanisation" and alternative ways of thinking about identity and cultural change. Arthur Eckstein, Eric Adler and Ben Isaac to different extents offer tasters of arguments developed more extensively elsewhere.

However, many essays are disappointing. It is often hard to detect an argument or the boundaries of each piece. Authors tend to plod through ancient narratives, reiterate well-known arguments of earlier scholars rather than offering a sense of the broader context (in terms of ancient evidence or modern arguments), and stray into the territories of other pieces. Ancient literary narratives are privileged throughout and largely uncritically, as a Rome-focused account of what really happened.

Framing one's questions about the Roman empire in terms of Roman modes of expansion, and Roman intentions and reflections, separable in time and space from the subjects whose elites (at best) "aped Roman ways and collaborated with their Roman rulers" (2), is to miss the opportunity to engage with some of the more challenging analyses of Roman imperial power of recent decades. These include Fergus Millar's The Emperor in the Roman World, 31 BC-AD337 (1977), Simon Price's Rituals and Power: the Roman Imperial Cult in Asia Minor (1984), and Clifford Ando's Imperial Ideology and Provincial Loyalty in the Roman Empire (2000), all missing from the bibliography. The Emperor in the Roman World turned out to be a game-changer insofar as it shifted our focus from the Roman center looking outwards towards the provinces to the provinces looking inwards towards Rome. Instead of thinking in terms of the emperor's role and responsibilities as defined by law, or trying to reconstruct the emperor's intentions and policies, Millar emphasized the reactive nature of imperial rule and the extent to which Rome's subjects created the emperor's role through petitions and requests. Price completely rethought the dynamics of the 'imperial cult' and the power dynamics it entailed, factoring in provincial agency at least as much as direction from the center, while Ando's emphasis on empire as a series of participatory rituals expanded the focus far beyond the religious sphere.

This remodeling of power is much more profound than the cultural "self-Romanisation" (e.g. 339) that surfaces in A Companion to Roman Imperialism, a process that is conceived of as subsequent to Roman conquest and expansion. One does not have to be an apologist for empire, or an advocate for either "defensive imperialism" or 'Realism' to want to factor multiple local interests and agencies into the story of Roman expansion itself, rather than just its aftermath. Recent scholarship has started to demonstrate the extent to which the infrastructures of Rome's Republican empire were knotted up tightly in pre-existing local institutions, making the reconsideration of the traditional periodization of imperial character and behavior an urgent matter.

Despite the presence of a few fine contributions, however, A Companion to Roman Imperialism upholds traditional boundaries rather than expanding them.