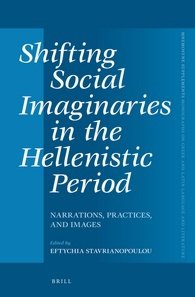 This collection of essays arises from a conference held at Heidelberg in November 2011 which was part of the editor's research project, 'The Elusive Greekness: Intertwined Social Imaginaries and Practices in Greece and the Near East in the Hellenistic Period'. Its purpose is to argue that the concept of the social imaginary can help us move our understanding of Greekness in the Hellenistic world beyond the rather inadequate paradigm of Hellenization vs. Post-Colonialism.

The volume consists of a general introduction by the editor, then fifteen essays arranged into three thematic sections ('Change and Continuity', 'Modes of Cultural Appropriation', 'Shifting Worldviews') and an epilogue, and finally four very helpful indices covering names, places, subjects, and sources. The subject matter of the essays is certainly diverse but avoids being diffuse, and a representative cross-section of the Hellenistic world has been covered in terms of the regions, kingdoms, cultures, and themes discussed. The contributors have generally chosen to write on subjects related to their recently completed or ongoing research, and as a result the methodological discussions of culture and identity are always grounded in a fine-grained knowledge of the evidence.

Eftychia Stavrianopoulou (3-5) introduces us to the concept of the social imaginary through the work of the Greek-French philosopher Cornelius Castoriadis and, more recently, that of the Canadian political philosopher Charles Taylor. [1] Insofar as the contributors engage with the concept of the social imaginary (only nine of the fifteen mention it), they rely on what they understand to be Taylor's formulation rather than that of Castoriadis, whom only Stavrianopoulou (3-7, 179-80) and Eleni Fassa (115-17) discuss. The contributors generally take 'social imaginary' to mean 'shared worldview' and so by extension 'group identity'. As Rachel Mairs observes (365), this formulation is rather close to Benedict Anderson's well-known notion of 'imagined communities', and more could have been done to bring out the distinct contribution which 'social imaginaries' is understood to be making (see very briefly 4-5 with n. 22). [2]

This conception of what a social imaginary is leads the contributors to place particular emphasis on how identity is subjectively experienced. Previous scholarship is criticized for placing ancient identities into categories which the people to whom these identities supposedly belonged would not have recognized. Thus, Deniz Kaptan uses the evidence of seals from Daskyleion and Achaemenid bowls from Sardeis to unpick the terms 'Graeco-Persian' and 'Persianizing' and to argue instead that western Asia Minor's material culture under Persian rule is best understood not through ethnicity but rather in terms of regional interaction (a "western Achaemenid koine" - 28-9, 30 n. 12). Many of the essays take a similar approach to the apartheid vs. assimilation dichotomy, with particularly interesting discussions in the studies of Heather Baker on the elites of Seleukid Uruk, Sylvie Honigman on Alexandrian Judaeans and the Letter of Aristeas, Jessica Nitschke on the many lives of Tyrian Melqart, and Rachel Mairs on the mirage of 'Greco-Bactrian' identity.

A point repeatedly made is that what we view as cultural paradox is instead often a product of our poorly conceived paradigms (e.g. giving undue primacy to ethnicity) rather than an indication of genuine cultural schizophrenia. [3] While those outside a social imaginary (whether they are contemporaries or modern scholars) may view an identity as being a contradiction in terms, this does not prevent the person whose identity it is from experiencing it as a coherent whole. There is therefore a danger with the cultural categories we create or the models of cultural transfer we employ (e.g. hybridity, creolization, code-switching, and so on) that these tools are serving as much to assuage our sense of alienation and incomprehension at the world our sources present to us as they do to get us closer to the historical reality of that world (see e.g. Honigman, 212-13, 229-30 and Mairs, 382-3). These points are nicely illustrated by Kaptan's treatment (38-9) of the syntactically incorrect iconography of an 'Achaemenid' silver bowl, Honigman's discussion (213-22) of the argument in the Letter of Aristeas that distinctive aspects of Jewish culture (e.g. dietary restrictions, monotheism) are in fact proof that they are better than the Greeks at Greekness, or Mairs' argument (374-5) that the Sophytos stele should be understood as being primarily about Sophytos expressing his pride at being a citizen of Alexandreia in Arachosia, rather than as an expression of a 'Greek', 'Indian', or even 'Greco-Indian' identity.

The important point here, that a disjuncture can exist between the physical manifestations of culture and how these are processed psychologically, should give us pause when considering cases of Hellenization in previously non-Greek areas. For example, while the civic institutions of Hanisa in Cappadocia which Christoph Michels discusses certainly look like those of a Greek polis, how sure can we be that the Hanisenoi experienced the political life these institutions entailed in a way that would be recognizable to a citizen of a polis in 'Old' Greece? Or to take Onno van Nijf's example of athletics, did a young man exercising in the gymnasium at Ai Khanoum understand what he was doing in the same terms that his counterparts at Beroia did?

Another consequence of privileging the emic perspective on identity is that the contributors are generally quite unwilling to assign political significance to a cultural choice unless the individual or group making that choice also marks it as being politically significant (see for example Nitschke, 264-73, on Melqart as Herakles and Mairs, 379-80, on Bactrian domestic architecture). The contributors therefore go looking for the politics of culture not in the cultural juxtapositions themselves (which may be unintentional or not even viewed as being juxtaposed in the first place), but rather in the contexts in which these juxtapositions occur. Two good examples of this are the papers by Gilles Gorre on the Egyptian priesthood and Eleni Fassa on the cult of Sarapis under the Ptolemies. Rather than approaching these topics from the perspective of to what extent they reveal the Ptolemies to have imposed Greek culture or to have been open to Egyptian influence, they instead identify ways that the Ptolemies appropriated these cultural institutions to become symbols of Greek ascendancy within Ptolemaic Egypt's Greco-Egyptian social order. It is therefore not really a question of whether the Ptolemies rejected or embraced local culture, but rather of how they made it ideologically 'safe' within the social order they had created.

While the working definition of the social imaginary being used throughout this volume has clearly produced several very interesting essays, it strikes me as having departed quite substantially from what Castoriadis and Taylor are talking about. In its original formulation, a social imaginary is a system of thought at the scale of the industrial revolution's imaginary of economic rationalism (Castoriadis) or of western modernity (Taylor). These social imaginaries are not in themselves identities, but rather the all-encompassing value systems which structure how individual and group identities are articulated (whether through conformity or opposition - e.g. capitalism and communism, democracy and autocracy). This conception of the social imaginary and the particular aspects of it which concern these two philosophers (the openness or conservatism of societies for Castoriadis, the spread of political values for Taylor) certainly pose interesting questions for Hellenistic historians, but they are not primarily questions at the level of particular group identities. [4]

Overall, the contributors make several important methodological points about how identity should be studied and the individual essays represent accessible and up-to-date introductions to the subjects covered. However, the lack of close and critical engagement with the theoretical source material on which the volume is based ultimately leaves the intellectual promise of the social imaginary for writing Hellenistic history unfulfilled.

[2] B. Anderson: Imagined Communities: Reflections on the Origin and Spread of Nationalism, London 1983 (second revised ed. London 2006). Taylor never cites Castoriadis, and instead identifies Anderson as his main influence: Taylor in: Public Culture (2002) 92 (as n. 1).