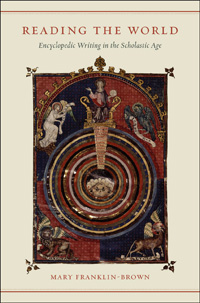 In her prize-winning first monograph, Mary Franklin-Brown accomplishes for the medieval encyclopedia what Alex J. Novikoff recently did for medieval disputation. [1] Both authors rescue their subject from the world of esoterica, showing the development of disputation and encyclopedias to be intrinsically linked not only to the evolution of scholasticism, ways of reading and book production, but also to vernacular literature and culture, and the very means by which medieval persons learned about the world and God. As did the medieval authors she considers, Franklin-Brown organizes her study by two sometimes discordant conceptual frameworks: the theories of Foucault and Bakhtin and medieval scholastic conceptions of figura, glossa, compilatio and ordo. Unlike her medieval subjects, Franklin-Brown has wisely chosen to restrict her study to medieval encyclopedic florilegia (as distinguished from summae, prosimetra, didascalica) from thirteenth-century France, particularly Vincent of Beauvais' Speculum maius (c.1235-64), Ramon Lull's (c.1235-1315) Libre de meravelles, Arbor scientiae and Arbre de filosofia d'amor and Jean de Meun's continuation of the Roman de la rose.

Franklin-Brown uses the fourfold figura, glossa, compilatio, ordo model to order a vast amount of material on topics as wide-ranging as the relationship between the visual forms of medieval manuscripts (layout, illustrations, text, paratext) and written speech, including rhetoric as painting with words, the relationship between word and image, and its impact on medieval memory and ways of knowing. Her discussion of figurae illustrates the tension within the medieval encyclopedic tradition between Augustinian semiotics (the concept that creation is a mirror by which one can know the creator, particularly through etymology, as embodied in Isidore of Seville's work of that name), the Neoplatonism of the twelfth century prosimetra (which relied heavily on metaphor and allegory), and the Aristotelianism of the thirteenth century (which privileged knowledge through the senses).

For Franklin-Brown, this tension between Aristotelian and Augustinian ways of knowing is mediated by medieval authors' treatment of Aristotle as but one of many textual authorities. The literalism of some medieval encyclopedias is not merely the result of a secularization intended to pander to wider audiences (52), but a byproduct of the fact that encyclopedias remained tied to and shaped by exegetical and pastoral practices, including the habit of compilatio (the citation of various authorities on a given topic) and the Victorine exegetical insistence on grounding knowledge in the literal meaning of the word (and world). Medieval encyclopedias thus represent not a rupture between earlier reading practices and those of the thirteenth century, but rather a forum where different discourses and epistemes dialogued with each other, where dissonance was accommodated rather than forcibly resolved (in contrast to disputationes, quaestiones and summae). The proliferation of encyclopedic florilegia in the early to mid-thirteenth century suggests to Franklin-Brown that their diverse and dissonant uses of language, plurality of subjects and authors, and graceless organization were uniquely suited to the heterogeneity of contemporary thought. They were something new (65, 72).

This something new was a shift in medieval models of the organization of knowledge, which accompanied the change from monastic to scholastic modes of reading and attempts to gerrymander the new learning of the Aristotelian and Arabic world into traditional schemata. Franklin-Brown concludes that if Vincent of Beauvais's terms historia and narratio (or enarratio) are understood as referring both to exegetical practice and rhetorical invention, to any unfolding of events in sequence, then the Speculum naturale was tied to the Speculum historiale and Speculum doctrinale through conceptual relationships between scriptural letter, rhetorical invention, and theological history. Ramon Lull's Arbor scientiae instead created a vertical encyclopedia which imposed ideological coherence on its material, privileging symbolic function over surface description to the extent that diversity was subsumed to structure. In contrast, Jean de Meun's continuation to the Roman de la Rose parodied encyclopedic disorder and cacophony in a verse romans which owed its mode of expression to the very forms it deconstructed: vernacular romance and the Latin prosimetrum.

Yet by the author's own admission, Vincent of Beauvais' Speculum maius was the only Latin encyclopedia of the thirteenth century to include natural history, psychology, the liberal and mechanical arts, and political, ecclesiastical and literary history. Despite the fact that it was admired and copied by medieval readers, it survives in very few complete copies: the Speculum historiale was by far the most popular portion, the other two sections much less so (126-8). Does this then make Vincent representative of the medieval encyclopedic movement or an aberration, an example of the "fragility of scholastic encyclopedism . . . when pursued . . . nearly to the limit" (128)? Perhaps an examination of the success or failure of earlier experimental encyclopedic forms including the works of Thomas of Cantimpré, Alexander Neckham, Bartholomeus Anglicus, and Jacques de Vitry's wildly popular Historia orientalis might shed light on the reactions of Vincent's readers and why other authors set limits which Vincent did not.

Ramon Lull was a similarly exceptional figure by any measure (as were his Italian contemporaries Brunetto Latini and Dante Alighieri) and combined Latinate learning with lyric tradition in his Libre de meravelles, which Mark Johnston has argued participated in the "popular scholasticism" of his age (131). Franklin-Brown inventively transposes Ramon Lull's work from its traditional Catalan context by looking at the surviving Latin and Old French versions of his works. The thirteenth century saw hesitation between vernacular verse encyclopedias and prose ones, and Lull eschewed the compilatio and Aristotelian focus on material phenomenon utilized by Vincent of Beauvais and instead exploited tree-figurae as the organizational spines for his vertical encyclopedia in the Arbor scientiae, fusing ordo and visual exegesis through figurae, and the embrace of allegory and symbolism as a universal language. Yet by Franklin-Brown's own admission, illustrators proved unable to depict Lull's trees, proof of the strained relationship between textual and visual discourse (167-70), and his work proved a "flop" in the medieval period. Jean de Meun similarly participated in while not altogether belonging to the worlds of scholastic culture, vernacular literature and the French court. Franklin-Brown concludes that his continuation to the Roman de la Rose pushed models of medieval scholasticism, the courtly discourse of lyric and romance and the allegorical discourse of Neoplatonic prosimetra to the limits by experimenting with the limits of rhetorical invention and parodying the natural world of encyclopedism, thereby challenging the concept that nature could mirror the divine order.

In a section titled "heterotopias," the author concludes that the very heterogeneity which Foucault banished from The Order of Things enabled a Bakhtinian heteroglossia, an accommodation of varied and often disparate discourses with the reader ultimately responsible for imposing order and interpretation. This revolutionized the nature of readership and bled over into the world of vernacular literature, resulting in such late medieval works as the Canterbury Tales and Decameron which were polyvocal by nature and resistant to a single interpretation. It also meant the early modern world's rejection of the encyclopedia as a mirror of the world, and its adoption of alphabetical order as an organizational principle. She visualizes this as a continuation of the rejection of linearity initiated by the codex format which enabled the reader to consult diverse and disparate passages. Those familiar with the history of the book and medieval pastoralia might quibble that alphabetization had also been linked to medieval exegetes' and preachers' collections of distinctiones and other tools indebted to codex technology (glosses, indices, chapter divisions, etc.) accompanying the new one-volume format of that ur-text of the medieval world, the Bible, in the later twelfth and early thirteenth centuries. Perhaps pocket Bibles and the technologies which sought to provide a portable one-volume library of all a pastor might need were somehow tied to the development of thirteenth-century encyclopedia as a self-contained library? It is perhaps no accident that the university of Paris and the mendicant orders were involved in the production of both genres. [2]

Similarly, Franklin-Brown's discussion of digital scholarship and Wikipedia leads this reader to wonder if her marvelously rich treatment of figurae, marginalia, and the written page may not have benefitted from electronic publishing and links to the images and manuscripts under discussion, thereby challenging modern notions of what a book constitutes. However, these are all cases of "what-if." Franklin-Brown does an impressive job of arguing for and demonstrating the importance and relevance of the medieval encyclopedia. If their goal were to represent all knowledge and transmit it to an audience, changes in their construction and organization indicated "alterations to paradigms of knowledge" (3-4) tied to the social, cultural and technological changes of the thirteenth century. Her work, like that of Mary Carruthers and other influential writers she cites, will undoubtedly spur on a new generation of scholars to examine changes in medieval readership, the history of the book, and the relationship between Latin and vernacular literature.