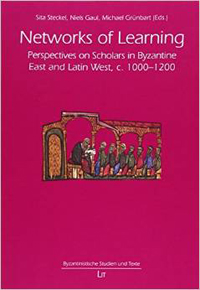 The academic interest in transnational and cross-cultural perspectives has been growing in the past decades, influencing also disciplines dealing with premodern cultures and literatures. Even though the concept of 'transnational' interaction is potentially problematic in the study of premodern cultures, such approaches have helped widening the scope of historical studies in general and opened up for welcome methodological discussions. In the case of European history, this wider perspective has also led to a less Euro-centric historical narrative, taking into consideration cultures formally seen as too peripheral for European concerns. One such example is Byzantium - a medieval empire that was never allowed much space in modern European histories, but whose historical significance is now slowly gaining ground, partly in relation to the changing political geography of Europe. An increasing number of scholars express the need for a connected history of the medieval period, including both the Byzantine east and the Latin west.

Focussing on the period 1000-1200, the new volume Networks of Learning, edited by Sita Steckel, Niels Gaul and Michael Grünbart, is a welcome contribution to such a connected history, applying a comparative perspective to education and transmission of learning in Byzantium and the Latin west. The editors - themselves leading scholars of academic environments in which such comparative approaches have been strongly promoted in the last few years - underline the need for interdisciplinary and comparative studies of institutions and traditions of learning in east and west. While this field of research is still marked by its respective disciplinary tradition, partly due to the linguistic divide between the Greek-speaking east and the Latin-speaking west, the present volume shows a way towards overcoming such obstacles by concentrating not so much on cultural contact and transfer as on mere comparison.

Ten contributions written by Byzantinists and medievalists, divided into two sections under the headings "Social ties and concepts of interaction" and "Authority and identity", guide the reader among teachers and teaching manuals in lay, monastic and ecclesiastical settings, networks and 'friendships' between scholars in various places, and the identity of the teacher in relation to students and peers. The recurring theme of friendship, primarily from the perspective of authority and social ties, is related to the volume's background in a workshop held in May 2008 in the framework of the British Academy's "Medieval Friendship Networks". Another outcome of that project was published in the same series a few years ago, which offers an interesting and rather useful companion to the present volume. [1]

Needless to say, no volume of this kind can encompass everything, but the scope is wide and there is a constant concern for methodological concerns that I think will prove highly useful. Such concerns are highlighted in the introduction (esp. XVII-XIX), but also in some of the individual contributions (e.g. the fine article by Mia Münster-Swendsen, discussing the use of emotions in intellectual milieus) and, above all, in the concluding section with two chapters by the editors Sita Steckel and Niels Gaul. Here, the aim of the volume - to enable dialogue between students and scholars of the Byzantine east and the Latin west, and to offer methodological points of departure for such a dialogue - truly comes to the fore. While the reading of the individual contributions offers glimpses of both tantalizing parallels and striking differences, they are now brought together for comparison, analysis and reflexion. This is perhaps the most valuable part of the volume, and Steckel's chapter stands out as a particularly clear and relevant discussion for future research.

Valuable as these long concluding chapters are, they cannot replace the index that the volume unfortunately lacks. While we all know how much work that needs to be invested in a good index and thus can sympathize with the choice not to include one, a volume like this would have benefited greatly from a general index. Cross-references between the individual contributions could have partly compensated for the lack of an index, but such references appear almost exclusively in the editors' concluding chapters. Imagine how useful it would have been for the sake of comparison to look up, for instance, Aristotle, who is cited in numerous contributions concerning learning and friendship in both east and west. The thorough bibliography, covering more than sixty pages, is impressive but slightly confusing, mixing primary sources with secondary literature.

Such formal shortcomings noted, this is still a highly useful volume, bound to promote and inspire both further studies of education and learning and future collaboration between scholars working on the Greek-speaking east and the Latin west. I read Networks of Learning with great pleasure and learned how the study of cultures of teaching brings us closer not only to the teachers and students of the past, but in fact also to the more recent history of scholarship and indeed our very own situation as scholars.